Don’t Miss These Six Stages of the Tour de France!

The Tour de France us upon us - here are six stages you seriously won't want to miss in the 2021 edition of the biggest show on Earth.

Picking the stages that will be most entertaining is something of an art, and we won’t claim to get it perfect every time. But eyeing the 2021 Tour de France route, here are six stages we think have the elements to be must-see TV. 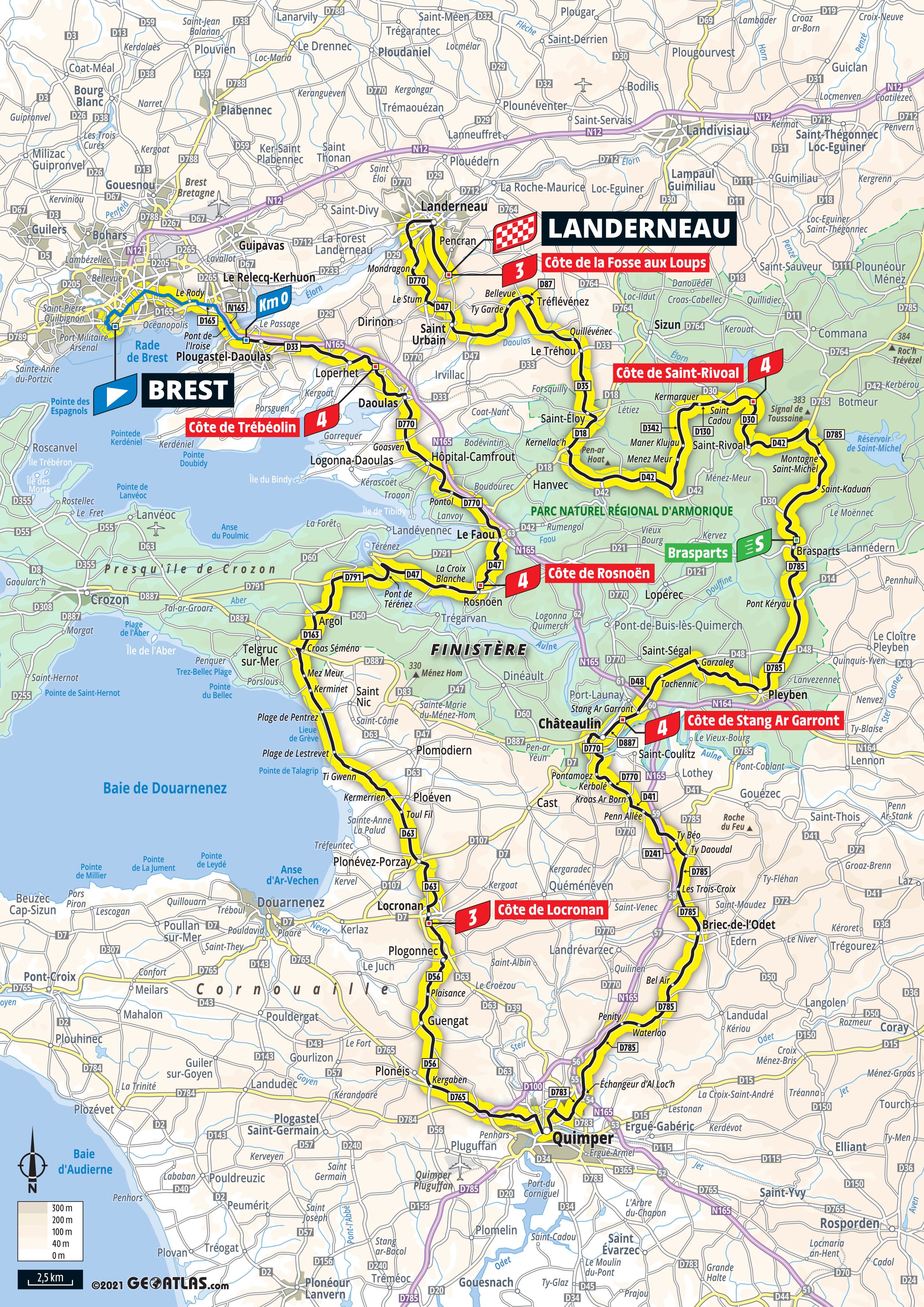 It’s rare that the opening stage of the Tour is filled with this level of suspense. But Stage 1 of the 2021 edition is an irresistible buffet of awesome.

Where to start? Well, at the start: the cycling-mad peninsula of Brittany in the country’s far northwest is hosting the 2021 Tour’s Grand Depart. Brittany has tiny roads that are almost never straight (or flat), which will accentuate the usual nervous fight for position that animates the opening stages of the Tour. It’s also notorious for crosswinds, and with a route that snakes down the coast of the Bay of Doaurnenez and back up again, there are plenty of opportunities for a large, motivated pack of racers to break into echelons on this opener. There are enough climbs to entice a serious breakaway of KOM jersey hopefuls rather than the usual rogues gallery of no-hopers you see on Stage 1.

And while most of the attention is on the steepish finish climb of Mur-de-Bretagne on Stage 2, the opening stage finishes on a tricky little Category 3 ascent that’s reminiscent of the old Amstel Gold Race finish. It starts off at 14 percent before backing off to a false flat before the finish, so it’s too steep for sprinters, but requires a perfectly timed move rather than just brute climbing power. All the GC guys will be attentive here, but it’s ideal for someone like Julian Alaphilippe of Deceuninck-Quick Step’s “wolf pack,” who might find the climb’s name—the Côte de la Fosse aux Loups, or Wolf Pit hill—an omen of sorts. 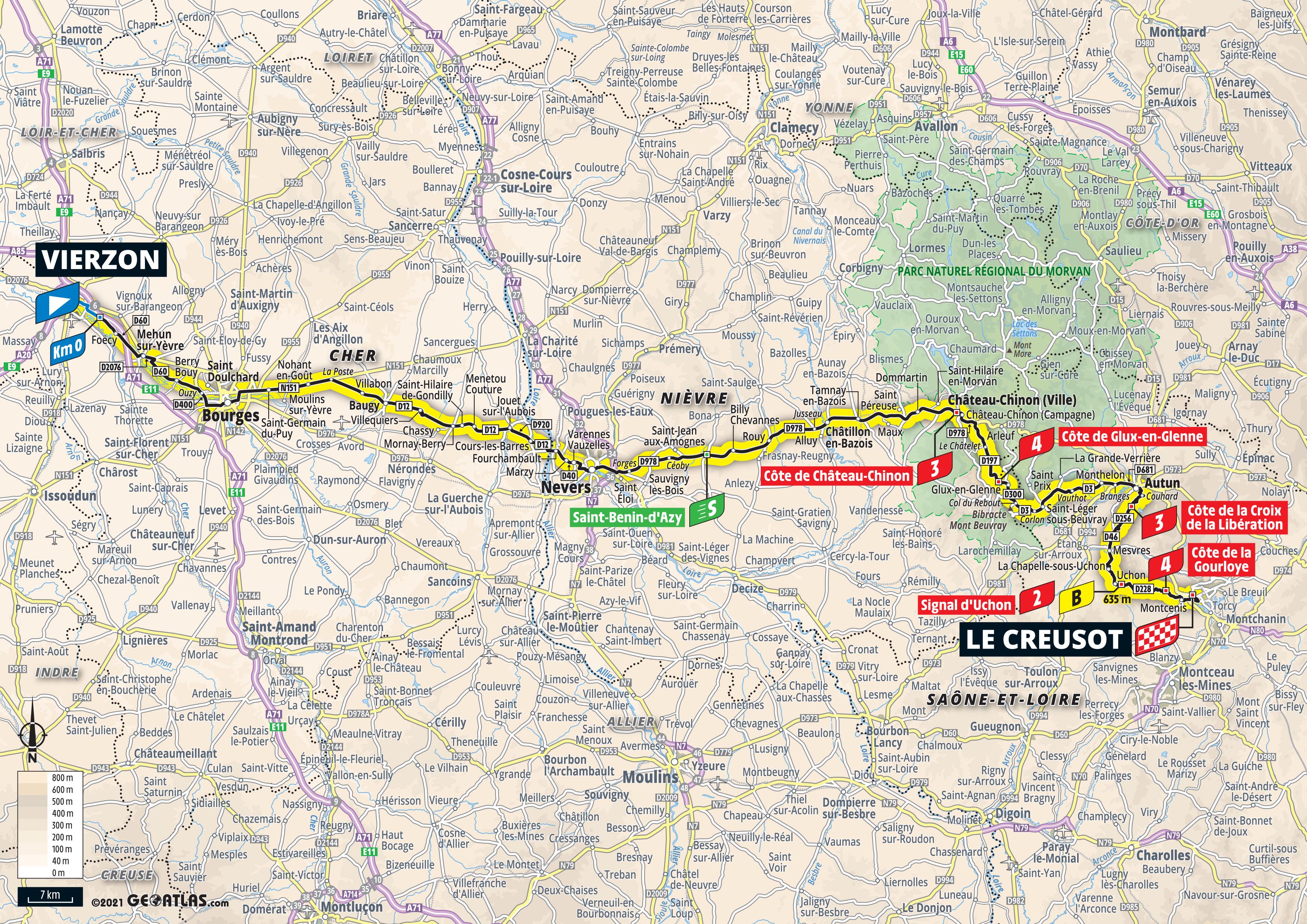 What jumps out about this stage is its length. It’s extremely rare to find stages in Grand Tours that are much over 225km long; this one—the longest in 21 years—is closer in distance to a Monument like Liege-Bastogne-Liege. But those are one-day races with recovery days immediately after; this comes almost a week into a Grand Tour.

And it’s not flat: five categorised climbs, all in the last 80km, including a Category 2 at 230km in that reaches maximum gradients of 18 percent. The only thing we know here is that we don’t know what will happen, because racing gets weird past 225km. Some riders are exceptional at the distance, while others find their power has left them. Most of the pack, including the overall contenders, will simply be looking to survive the day, especially if it’s hot. But if we look to Classics races as our template, there may well be an early breakaway and a larger, more serious second one later in the stage. While it isn’t expected to be a day for the overall favourites, it’s not out of the question that one or more GC rider could have a rough day and will get distanced on the steeps of that late Cat. 2 ascent. The way GC racing plays out, there will not be a moment’s hesitation to make that rider pay for his weakness. The best bet is for a late breakaway to survive: riders who thrive on long, hard courses, like Dan Martin, Philippe Gilbert, or Vincenzo Nibali. 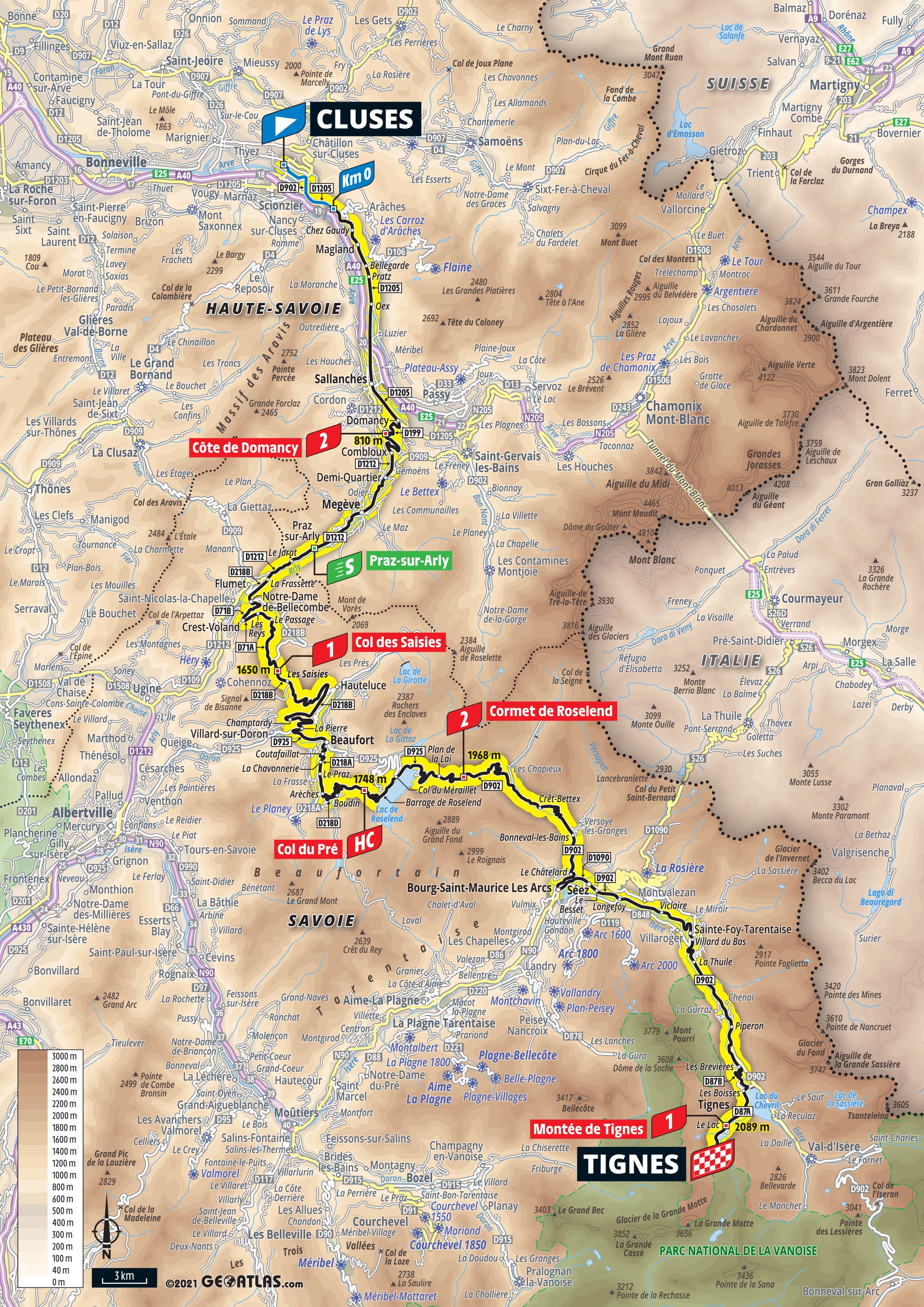 This year’s Tour goes light on the Alps, with only two stages—Stages 8 and 9—that pass through the famous mountain range. Of the two, Stage 9 is the one to watch as it brings the Tour’s first summit finish, in Tignes. The climb to Tignes was supposed to host the finish of Stage 19 of the 2019 Tour de France, but the riders never got there as storm-induced rock and mudslides led to the stage being stopped following the Col d’Iseran, on which Egan Bernal had escaped to take the yellow jersey.

The day begins in Cluses with a false flat to the base of the day’s first ascent, the Category 2 Côte de Domancy (2.5km at 9.4 percent), the first of the stage’s five categorised climbs. It’s here that a breakaway should form, filled with stage hunters and riders looking to score lots of points in the Tour’s King of the Mountains competition. The intermediate sprint in Praz-sur-Arly comes soon after, followed by the Category 1 Col de Saisies (9.4km at 6.2%). A long descent takes the riders to the valley below and the base of the day’s toughest climb, the Hors Categorie Col du Pré (12.6km at 7.7 percent), which—when combined with the Cat. 2 Cormet de Roseland (5.7km at 6.5 percent) 6km later—is essentially two climbs for the price of one. But riders dropped from the break or the peloton on the Pré-Roseland combo should have a chance to rejoin their groups on the long descent to the valley below, where wind direction on the roads to the foot of the final climb will seal the fate of the breakaway.

The final Category 1 climb to the ski resort in Tignes (21km at 5.6 percent) isn’t particularly hard, but it’s long, steady, and takes the riders above 2,000 meters (where the riders start to feel the altitude’s thin air) for the first time in this year’s Tour. Look for INEOS and Jumbo-Visma to set-up their “mountain trains,” lining up their riders and setting a stiff tempo in a bid to prevent sudden accelerations—while dropping riders out the back. And if the break is close—which it could be given this stage’s relatively short distance—there’s the added incentive of bonus seconds going to the top-3 finishers. In the end, we could see a select group of favourites sprinting for the win, similar to last year’s Stage 4 finish in Orcières-Merlette, where Primož Roglič won the sprint to take the stage victory. 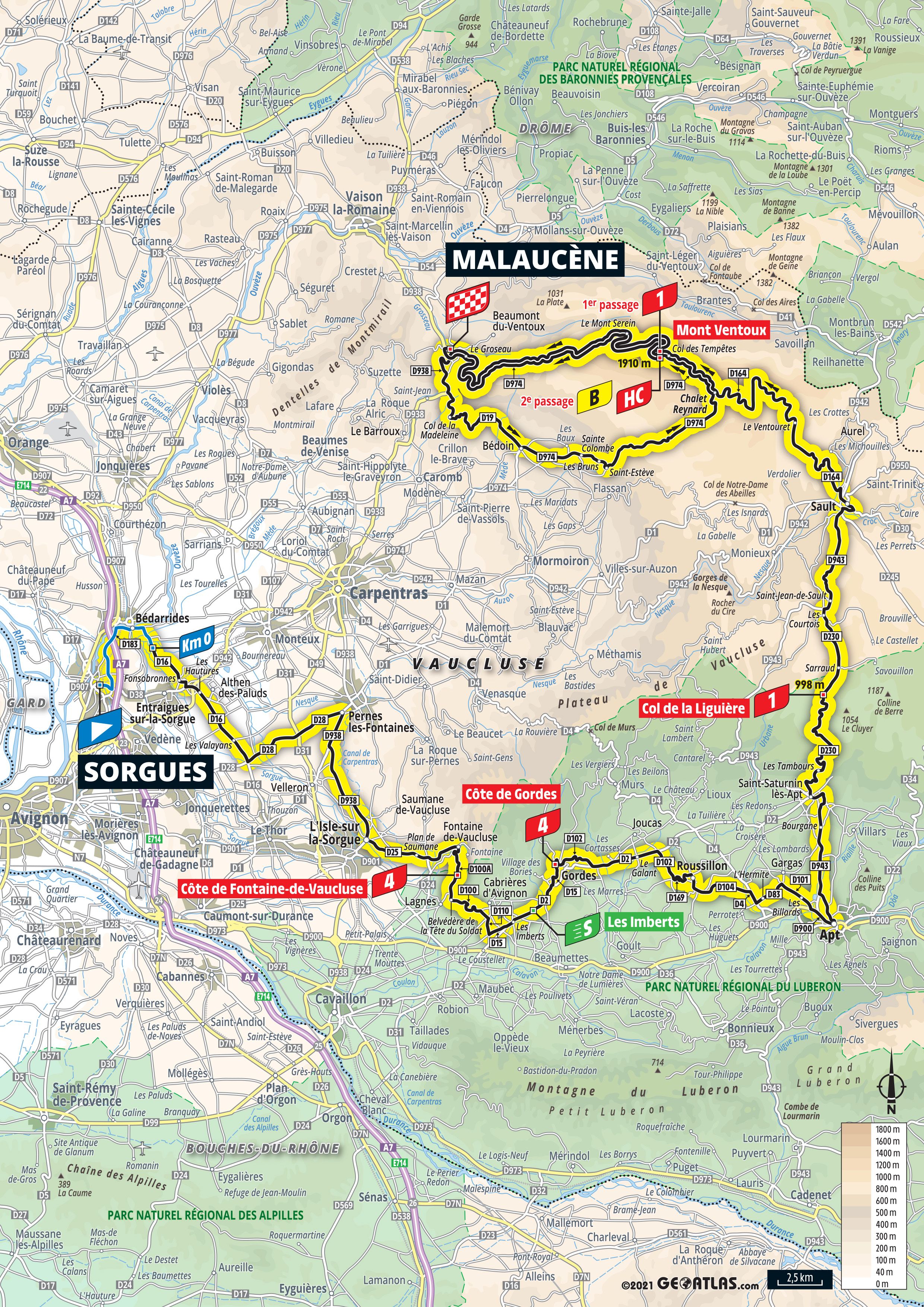 The fabled and feared Mont Ventoux makes not one appearance in this gruelling stage, but two. After 100km of warmup, including three other categorised climbs, the pack will ascend to Ventoux’s windswept, treeless summit first via the more “gentle” side from the town of Sault (22km at 5.1 percent), then descend to the bottom in Malaucene and tackle the shorter but steeper climb from Bedoin (15.7km at 8.8 percent). They’re STILL not done, though, as the race drops a second time down the descent to the finish in Malaucene. That devilish little twist turns what is normally a straightforward—if arduous—climbing stage into a tricky affair that’s loaded with opportunities for things to go wrong.

The double ascent, with the steeper one coming second (the ascents join at Chalet Reynard for the final 6km of each), will absolutely explode the pack on the second go-round. And the 21km descent to Malaucene is no joke, with tricky hairpin turns and long stretches of 10 percent drops. There’s almost no flat terrain at the bottom for a dropped rider to re-catch the leaders before the finish, so gaps that form on the descent will stick. This is an absolutely pivotal day for all GC contenders, and which will reward a complete winner, with the climbing strength, descending chops, and tactical savvy to follow the wheels until it’s time for that one devastating attack. Whether it’s on the climb or descent, no one can say, but it’ll happen. Our picks? INEOS’s Richard Carapaz has the perfect skillset for the day, but keep an eye out for Nairo Quintana of Arkea-Samsic and Movistar’s Miguel Angel Lopez, who won a key tuneup race on a highly similar course in early June. 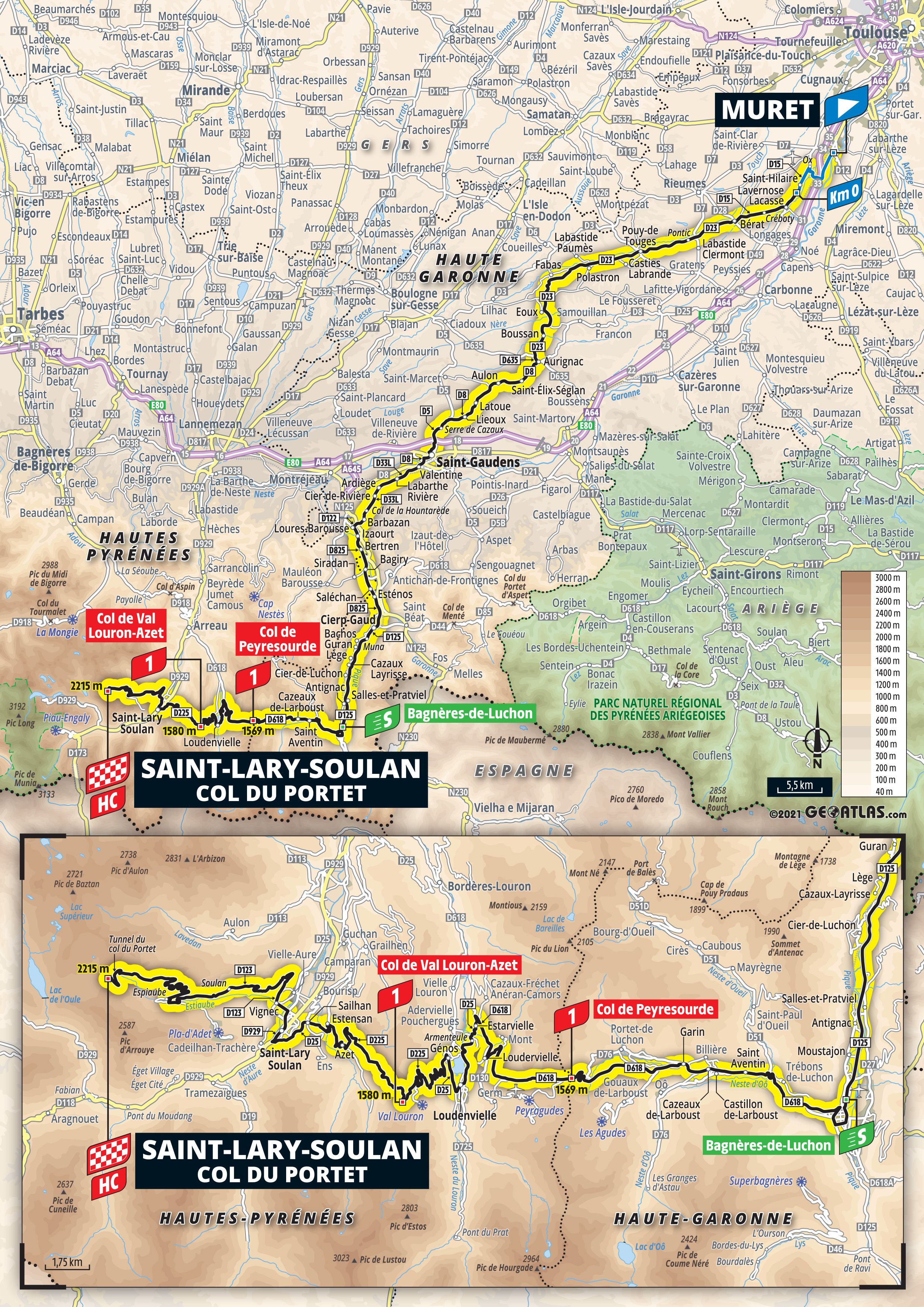 What the 2021 lacks in Alps it more than makes-up for in Pyrenees, with four stages through the range that forms the border between France and Spain. But while all four stages will be exciting, we’ve got our eyes on the last two. Stage 17 begins gently, with about 115km of gradually rising roads as the race heads southwest from Muret. But once through the Intermediate Sprint in Luchon, things get hard—really hard—as the race follows the route of Stage 17 from the 2018 Tour de France, a super-short stage of 65km that tackled three categorised summits. (The stage was so short that the organisers used a Formula One-style starting grid to begin the race.)

The climbing begins with the Category 1 Col de Peyresourde (13.2km at 7 percent), which should prompt attacks from out-of-contention stage hunters and the few remaining riders who still have a chance of winning the polka dot jersey as the Tour’s King of the Mountains. They won’t get much of a gap, though, as teams like INEOS, Jumbo-Visma, and UAE will do their best to keep their leaders close enough to perhaps win the stage themselves. Up next comes shorter—but steeper—Category 1 Col de Val Louron-Azet (7.4km at 8.3 percent). The KOM points here should also go to a rider from the breakaway, but with what’s still to come, the break might not last much longer.

The stage ends with perhaps the toughest single climb in this year’s Tour: the Hors Categorie Col du Portet (16km at 8.7 percent). Long, steep, and finishing at elevation, it’s here that the break should be caught and the Tour’s GC contenders will emerge. Quintana won the stage for Movistar in 2018, attacking soon after the climb began and sweeping up everyone on the road ahead of him to win his first stage in five years. He was far enough down the GC at the time to be given a bit of a leash, and he might find himself in a similar position this year. It’s also Bastille Day, which means the roads will be lined with partying fans—and the French will be très eager to win the stage.