The 2020 Tour de France swings into its final week, with its only race of truth looming but zero clarity in any of the jersey competitions!

As weird as 2020 has been, on all levels, the truth is that this Tour has been doubly so. With no racing in the build up to the biggest bike show on earth, it has been difficult to predict form and fitness, and we have been spoilt rotten with action, implosions and intrigue. So what truths will we uncover in the final six days?

When Egan Bernal lost the pace of the yellow jersey group on the Grand Colombier in Stage 15, it marked something entirely new for the INEOS Grenadiers team. For the first time in the last five Tours, and just the second time in the last nine years, an INEOS rider will not win the race.

INEOS, formerly called Sky, started its domination of the Tour in 2012 with Brad Wiggins’s victory. The only Tour that the team has lost since then was in 2014 when team leader Chris Froome dropped out of the Tour after a Stage 5 crash, in truth they would have won that one too. But every other year, an INEOS (Sky) rider has won, often in convincing fashion, and twice, the team has placed two riders on the podium.

Not this time. Bernal will be back, for sure, but it’s evidence that INEOS’s suffocating control of the world’s most important race isn’t a given going forward.

A Year At the Front

Breakaway specialist Thomas de Gendt is known for laying down the power for long periods of time on his signature long-range escapes. The form that has won him stages of every Grand Tour doesn’t seem to be there this year though, as he tweeted after Stage 14.

For sale. Pair of legs. Slightly used. Good enough to win any kind of race except Tour de France stages. Dm if interested.

We don’t know many riders who wouldn’t get a serious upgrade by switching to Thomas de Tractor’s legs, but do be aware that they’re high-mileage. The truth is that the longtime Belgian pro has raced 18 Grand Tours and is on his eighth Tour de France. In fact, by the time the race reaches Paris, the 33-year-old de Gendt will have spent 360 days—almost a full year of his life—racing in Grand Tours alone.

The overall standings remain fairly tight after 15 stages, with Jumbo-Visma’s Primož Roglič leading UAE-Emirates Tadej Pogačar by just 40 seconds. But things could easily be tighter were it not for a pivotal stage in the race’s first week, and not a summit finish.

On Stage 7 into Lavaur, France, crosswinds split the field and caught out several overall contenders, including Mikel Landa (Bahrain-McLaren), Richie Porte (Trek-Segafredo), and Tadej Pogačar (UAE-Emirates). They lost 1:21. Truth be told, without that loss, Pogačar would be in the lead by :41 over Roglič, with Porte and Landa third and fourth overall, around a minute and a minute and a half back, respectively. Of course, had Pogačar taken the lead earlier, we’d have seen different racing because his team isn’t as strong. But it’s worth noting how the Tour can be dramatically shaped by days that don’t seem significant on paper.

Speaking of the standings, Roglič and Pogačar in particular have been duking it out for stage placings on summit finishes not only for time gaps, but because every stage features time bonuses to the first three riders across the line (10, 6, and 4 seconds). So Pogačar picks up four seconds on Roglič on Stages 9 and 15 even though they finished on the same time. But that’s blunted by Roglič’s Stage 4 win over Pogačar. The two look tightly matched.

There are two summit finishes left where they might vie for bonuses again (there are no bonuses for the Stage 20 time trial), and the two are too far apart for time bonuses to make the difference, but they could factor in the fight for other podium placings, as Rigoberto Uran (EF Pro Cycling) and Miguel Angel Lopez (Astana) are separated by just 11 seconds. 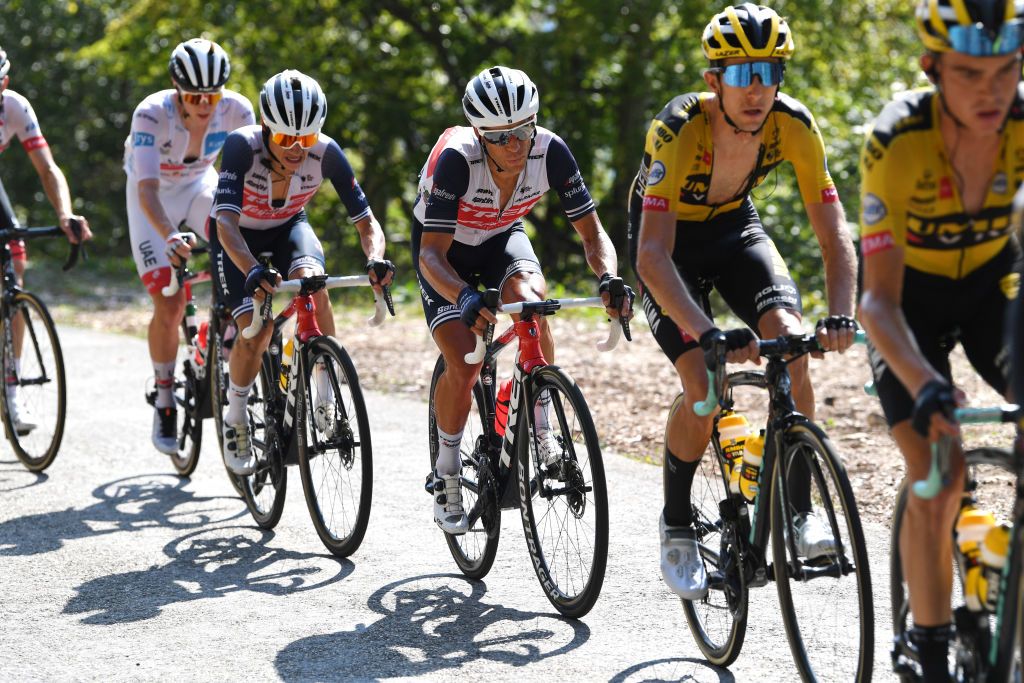 Friends in the Right Places

Another “what could’ve been moment” contrasts two riders who had mechanical trouble at crucial moments. On Stage 14, Porte double-flatted on a pothole with just 8K to go on a rollicking finish into Lyon. The pack was in full flight, and Porte risked another episode of the bad luck that seems to dog him in Grand Tours. But his Trek team smartly placed teammate Kenny Elissonde right with him for the finale, and Elissonde quickly gave Porte his bike in his moment of truth, and Porte was able to re-catch the pack.

Elissonde is the only rider on the team who is close to Porte in size: he’s just under 5’6″ while Porte is just over 5’6″. Everyone else on the team is at least two inches taller. Meanwhile, Cofidis team leader Guillaume Martin had a mechanical right at the base of the Grand Colombier on Stage 15 and needed a wheel change. With no teammates right near him, he was forced to wait for the team car. He eventually re-caught the Jumbo-led group but the extra effort likely cost him, and he was dropped just a few kilometers later and lost 3:25 on the day.

Which Jersey Competitions Are Still Open?

Green/Sprinters: I previously noted that Peter Sagan (Bora-Hansgrohe) might have cost himself a chance at an eighth green jersey with his relegation for dangerous sprinting on Stage 11, which left him almost 70 points behind leader Sam Bennett (Deceuninck-Quick Step). Sagan started to claw back the deficit yesterday, but he’s running out of road. He needs everything to break his way to have a shot, and there’s one wild-card: Bennett is not a climber, and Bora’s truth-stranger-than-fiction tactic of making the race hard on the climbs the last few days has definitely taken its toll on the Irish rider.

On Stage 13, Bennett finished dead last, albeit well inside the time cut (the point where riders are withdrawn from the race). On Stage 14, with less climbing, things went slightly better even as Bora pushed the pace and he finished comfortably in the grupetto, the group of riders that brings up the rear of the stage and stays together to try to make the time cut. On Stage 15, he wasn’t able to stay with the grupetto and inched closer to the time cut. There are more days like that ahead.

White/Young Rider: This one’s all but over unless Pogačar has some major mishap. With Bernal’s crack in Stage 15, Pogačar leads by 2:35 over Movistar’s Enric Mas, who’s been climbing well but a little anonymously. Bernal is going backward in third, at 7:45 back, and the rider in fourth is more than an hour down.

Polka-Dot/Mountains: This one could be interesting. Against all odds, Benoit Cosnefroy (Ag2r la Mondiale) still has a slim lead here at just 36 points, despite clearly not having the legs to defend much longer. But what’s interesting is that there don’t yet appear to be many riders seriously targeting the KoM competition alone. Second and third place go to Pogačar and Roglič, with 34 and 33 points, respectively. It’s entirely possible that Pogačar could make it to Paris with the white and polka-dot jerseys (and, yep, maybe yellow too). The most likely riders to give the KoM standings a go are Pierre Rolland, the Stage 15 attacker, and Stage 12 winner Marc Hirschi. Both of them have 31 points. With lots of climbing yet to come, there’s all kinds of opportunities, but in truth we haven’t a clue, either!