Pretenders step left, the Alps are here to sort out the 2020 Tour de France (but maybe only after the break).

Stage 16 brings the Tour out of its second rest day with the first of three days in the Alps, a 164-kilometer stage with five categorized climbs and an uphill finish at Villard de Lans. 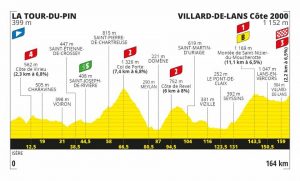 As we’ve seen over the past few days, the stage should begin fast with both Deceuninck – Quick-Step and BORA-hansgrohe going on the attack to try and set up Sam Bennett and Peter Sagan for the day’s Intermediate Sprint in Saint-Joseph-de-Rivière, 44.5km into the stage. Quick-Step needs to be careful: this is the Alps, and there’s a Category 4 climb only 12.5K into the stage, and if Bennett tries too hard to stay with Sagan (as he did on the Category 4 climb right before the Intermediate Sprint on Saturday’s Stage 14), he could blow up entirely, thus putting him at risk of not making the time cut and therefore losing his green jersey for good. The serious Alps begin soon after the sprint, with two Category 2 ascents in somewhat close succession, followed by a lumpy descent down to the valley floor.

GET FASTER The Climbing Workout To Rule Them All

The real action should go down on the Category 1 Montée Saint-Nizier-du-Moucherotte, which climbs from the valley outside of Grenoble up to a ridge along the eastern edge of the Vercors plateau. The road then descends for about 18km on the top of the plateau, before a Category 3 climb to the finish line in Villard de Lans – mountain-top finishes in the Alps are always hard, with lesser gradients than the Pyrenees meaning faster speeds. Jumbo-Vlisma territory.

This is the easiest of the final week’s three Alp stages, and should serve as more of an appetiser than an entree, especially with a high-altitude summit finish looming in Méribel the next day. So we suspect another breakaway filled with talented but out-of-contention climbers to find success, while the Tour’s GC contenders ride tempo, saving themselves for Wednesday’s showdown.

Who will take the first Alp scalp?

This is a great stage for a puncheur like Quick-Step’s Julian Alaphilippe, who would love to take another stage in this year’s Tour. It also presents another opportunity for some of the riders we tipped for Sunday’s Stage 15: BORA’s Max Schachmann and Lennard Kämna and Team Sunweb’s Tiesj Benoot and Marc Hirschi (who won Stage 12). 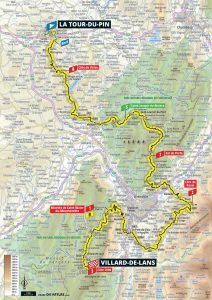