We address if cycling makes your legs bigger and provide other answers to common questions about how riding a bike shapes your body.

“Will cycling make your legs bigger?”

“Will cycling make your thighs bigger?”

“Will cycling make me skinny?”

Google “will cycling make….” and those are (somewhat ironically) the first three autofill searches that pop up. Which is surprising, but unsurprising, when you consider that just a few years ago Harper’s Bazaar published a feature story titled “Is Spinning Making You Fat?”

Spoiler alert: No! Cycling will not make you fat. It will make you fit and strong. Will it give you monster quads? Maybe if that’s what you’re after (but you’ll need to do more than just ride). Or it might just give you some unique muscle tone, like that distinctive teardrop over your kneecap (otherwise known as your vastus medialis oblique, or VMO) and carved split on your calves. If you ride (or do any exercise) regularly, your body adapts to help you be better at it. That’s how training works.

“In general, cycling can help improve cardiovascular fitness and decrease fat mass,” says Jinger Gottschall, an associate professor of kinesiology at Penn State University. How it will otherwise shape your muscles and your mass depends on myriad factors, including how much you ride, the kind of riding you do, as well as your hormonal makeup. Here’s what you can expect.

If you ride 15 to 20 (or more) hours a week, you better believe you’ll have the legs to show for it. “Professional cyclists have a larger thigh muscle cross section than non-cyclists,” says Gottschall. Especially pronounced are the quadriceps muscles that push the pedals down, as well as the large hamstring muscles that help sweep the pedals up. That’s why brands such as Levi’s make special jeans to fit cycling enthusiasts who have trim waists, but may still not be able to button their jeans because they can’t get them over their quads.

Recreational riders or indoor cyclists who spin two or three times a week for exercise don’t have bigger thighs than non-riders, says Gottschall. “If you ride to meet your physical activity requirements of 150 minutes a week, there’s no significant difference,” he says.

You need to add weights to get seriously swole.

The track racers you see sporting those quadzilla-sized gams push more than pedals to get that way. They also push heavy metal plates, says Gottschall. “The magnitude of muscle hypertrophy with cycling is one-third of the muscle hypertrophy you get from resistance training.”

Men tend to be more muscular than women because they have higher levels of the hormone testosterone. The anabolic hormone regulates and stimulates protein synthesis, says Gottschall. The better your body is at taking protein and synthesising it into your muscle cells, the bigger those muscle cells can become.

You may become a bit imbalanced.

Muscle activity is almost four times greater in the quadriceps than in the hamstrings during cycling, says Gottschall. “Knee flexion exercises can help maintain balance.” Try a TRX hamstring curl:

Sit facing the anchor point, straps at mid calf, and place both heels into the foot cradles. Lie down faceup with legs extended straight, feet below anchor point, and arms at your sides. Keeping your core tight, lift hips off the floor, then pull heels in toward glutes in a smooth and controlled motion. Keep hips lifted as you straighten legs back to the starting position. Repeat until fatigue. 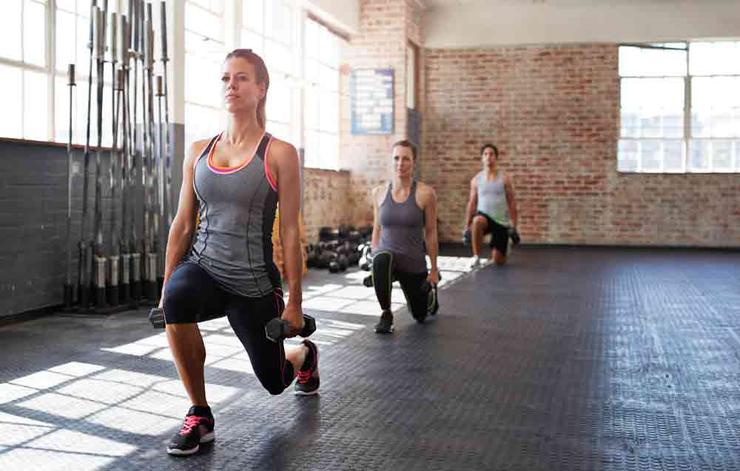 Riding builds heart and lung strength, so you can get leaner.

High-intensity cycling increases your heart and lung capacity, says Gottschall. Better cardiovascular fitness makes you a better fat burner. It also means you can ride faster for longer, and burn more calories. “I recommend two high-intensity sessions a week that include 20 minutes of interval training above 85 percent of your maximum heart rate,” she says.

Hypertrophy only happens under heavy loads. That’s why sprinters, who routinely hammer monster gears, develop tree-trunk quads over time. Riding lots of hills can make you stronger and eventually build muscle, but the overall load tends to be lighter since we spin rather than mash our way up hills.