Get your om on! Enlighten your ride with the strength, flexibility, and feel-good benefits of yoga.

Get your om on! Enlighten your ride with the strength, flexibility, and feel-good benefits of yoga. – By Leah Flickinger 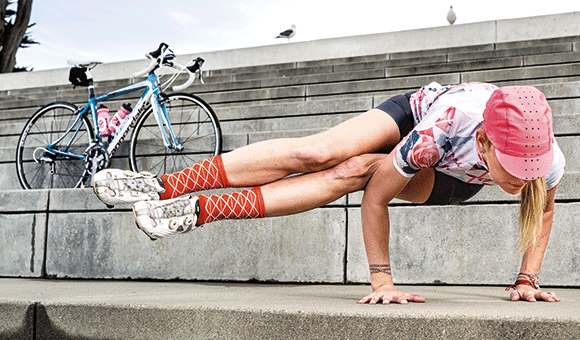 Cyclist and yoga instructor Pat Bailey can frequently be found snapping selfies as she twists like a pretzel in surprising places, often with a bike. Those eye-catching poses have inspired a devoted and sizeable Instagram following – 70K and counting – and helped Bailey, who pedals her road, mountain, and cruiser bikes all over town, realise that yoga is a lot like cycling. “When you’re climbing slowly, breathing in that sweet pine air, and you’re focused on watching the trail and being on your bike,” she says, “that’s yoga.” Who knew the two had so much in common? Allow her to elaborate.

Most people think that yoga is this esoteric thing. They associate it with being on your mat, and believe that it has to do with certain poses in a sequence, or flow.

Cyclists would be surprised to learn that they are doing yoga on their bike. Being aware of your breath and what your body is doing is yoga. If you’re a cyclist, you’re already doing that.

I didn’t do traditional yoga on a mat this morning, but I did it on my bike. On your bike you are aware that you have control over everything that happens there in that moment. You are in tune with the movement of your body and conscious of your breathing. It’s the same on a yoga mat.

Just like in the flow of yoga, there is a rhythm in cycling, and when you find it the ride becomes very Zen. I think this is why we get back on our bikes over and over again. And of course, both yoga and cycling have a natural flow – easy parts and hard parts.

In yoga we have a drishti, which is a gazing point. It’s similar on a bike because you always want to be looking ahead to where you are going. So you have a drishti focused on the trail or road in front of you.

I picked up my first road bike about seven years ago. My first ride was around a local loop, which is about 40 kilometres, and I felt like I was riding in a postcard. Very quickly, as cycling does, it started to chip away at my belief barriers. That hill, which was huge when I’d just started, was getting easier.

I got hooked instantly. A friend suggested I race. I thought I was too old. But I decided for my 40th birthday I would give myself a season of racing. I found a team and raced about 10 criteriums that year, and did pretty decently for a first-timer.

I would find myself smiling the whole time. I felt like I was living. It’s the adrenaline. It’s the camaraderie. It’s going fast on your bike. It’s the skill of it. It’s the challenge of doing it better the next time.

There’s a little bit of spirituality in the yoga that I practise. It means that you are offering your practice up to someone or something. For me, it’s a lifestyle, it’s a way that I live. It’s a toolbox, a set of rules and guidelines for how I live my life.

Almost every day, I do a little bit of meditation. Sometimes it’s really active, sometimes it’s a little bit less active, when I’m just taking a minute to pause and to think about my breath and be in the moment.

The side benefit of yoga is that you stay in shape, and your body looks great, and you have lots of flexibility and open hips. Yoga helps me be more open and more flexible off the bike. But the number-one thing that I love is the core work. A strong midsection helps with bike handling.

The yoga-cycling connection is seamless in my mind. Practising yoga helps prepare your body to be on your bike, and it’s also especially important for recovery and undoing everything that the bike does. We are hunched over, we’re pedalling, so our hips are really tight, the hamstrings are tight, quads are tight, everything is tightened up. Yoga gives you the ability or the reason to undo that.

A lot of yoga is a frame of mind, a euphoria. Yogis believe in getting rid of all the distractions outside and looking within and focusing on their breath and their bodies to arrive at a place of enlightenment. I feel like you get that on the bike too.