The Cyclist’s Guide To HIIT Training

HIIT can take your training and performance to the next level. Here’s everything you need to know about the popular exercise technique.

High-intensity interval training, or HIIT for short, was named one of the top fitness trends in the world for 2019, based on an annual survey by the American College of Sports Medicine.

This super hard, super effective style of training isn’t just the “it” workout of the moment – of the 13 years ACSM has been conducting this survey, HIIT also topped the list in 2014 and ranked in the top three for five consecutive years.

Why? Because it works, and it works fast. Whether you’re coming straight off the couch, you like to do long rides in the summer, or even if you race your bike for a living, HIIT training is good for your health and makes you fitter and faster.

What Exactly Is HIIT?

How hard is hard? That depends on the interval length, but the key is to go as hard as you can for the duration of the effort. So if you’re doing Tabatas (20 seconds of effort, followed by 10 seconds of recovery), you’re pushing full throttle for 20 seconds. If you’re doing longer, 3- to 5-minute intervals, you’re working in your VO2 max zone, or about 95 percent of your max heart rate (or a 9 on a scale of 1 to 10) for the duration of the interval.
RELATED:The Best HIIT Workouts for Cyclists

How much recovery you take between intervals depends on your goals. Short intervals are usually paired with equally short or even shorter recovery periods so your body can adapt to repeated maximal efforts. And because your heart rate stays elevated during the recovery periods, your aerobic energy system gets a training benefit, as well. In other cases, such as super high-intensity sprints, you want each effort to be done at max, so you need to let your body fully recover for four or five minutes between bouts.

What Are the Benefits of HIIT?

New studies on the benefits of HIIT make the news on a regular basis. Take, for example, this one from the November 2018 issue of American Journal of Physiology-Regulatory, Integrative and Comparative Physiology. Researchers found that just two minutes of sprint interval training (in this case, four 30-second max-effort sprints followed by four and a half minutes of recovery for a total of 20 minutes) improved mitochondrial function – when your cells can change fuel to energy quickly, a benchmark for good health and exercise performance – just as well as 30 minutes of moderate exercise in a group of active men and women. In other words, busting out two minutes of really hard work can give you the same fitness benefits as slogging through 30 minutes at a steady, moderate pace.

So it’s no surprise HIIT training is outstanding for your cardiovascular system. Research shows, depending on how fit you are when you begin, HIIT can boost your VO2 max (how much oxygen you can use) up to 46 percent in 24 weeks; increase your stroke volume (how much blood your heart pumps out per beat) by 10 percent after eight weeks of training, and significantly lower your resting heart rate.

It also makes your body a furnace of a fat burner. HIIT jacks up production of your body’s growth hormones that help you maintain muscle and burn fat for hours after you’re done, and it lowers insulin resistance for better blood sugar control.

The best part is that it provides all of these benefits as well as – and in some cases better than—traditional longer bouts of moderate cardio exercise in far less time. 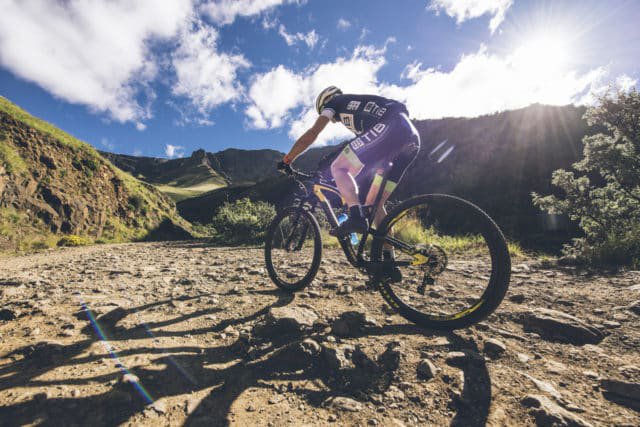 What HIIT Means for You

Most of us already ride a lot because as endurance athletes, that’s our thing. But even if you’re already fit, you can still reap measurable benefits from adding HIIT to your training regimen, says exercise physiology professor and coach Paul Laursen, Ph.D., endurance coach, author of The Science and Application of High-Intensity Interval Training (HIIT), and contributor to HIITscience.com.

“Our research found that when well-trained cyclists performed two interval sessions a week for three to six weeks, their VO2 max, peak aerobic power output, and endurance performance improved by 2 to 4 percent,” he says.

How To Do HIIT

Larsen says you’ve got three main weapons to choose from in the HIIT arsenal: Long intervals like the VO2 intervals that range from one to four minutes; short intervals done at about 120 percent VO2 max that can last from 10 to 60 seconds with equal recovery periods; and sprint intervals, which are done “all out” and can be either very short (three to six seconds) or longer (20 to 30 seconds).

You can take the shotgun approach and rotate through all three. Or choose the format that best works your weak spot. “If you fade out during longer efforts, do longer HIIT training intervals. If you’re lacking in the short 10 to 30 percent power range, then do sprints,” he says.

“Performing three to six of these efforts, allowing one to two minutes of recovery between, can have impressive effects,” he says.

You can perform HIIT intervals in your primary sport, or you can do them when you cross train to get a metabolic boost while giving your body a break from your usual activity, Laursen says. “This works well for runners and team sport athletes who occasionally need to reduce their impact while nursing a little injury or niggle,” he says. “They can do a HIIT session on the bike to maintain their cardiovascular load, while lessening the impact on their neuromuscular system.”

How Often Should You Do HIIT?

HIIT is like medicine: The right dose works wonders; too much can have ill effects. If you’re not racing or doing big events on the weekends, you can do up to three HIIT workouts a week to stay fit, so long as you allow ample recovery, ideally a day or two of easier activity, between sessions to allow your body to bounce back.

Once you’re out there putting in longer kilometres and/or pushing it hard with weekend outings, you can dial back your HIIT workouts to just once or twice a week to stay sharp between events.