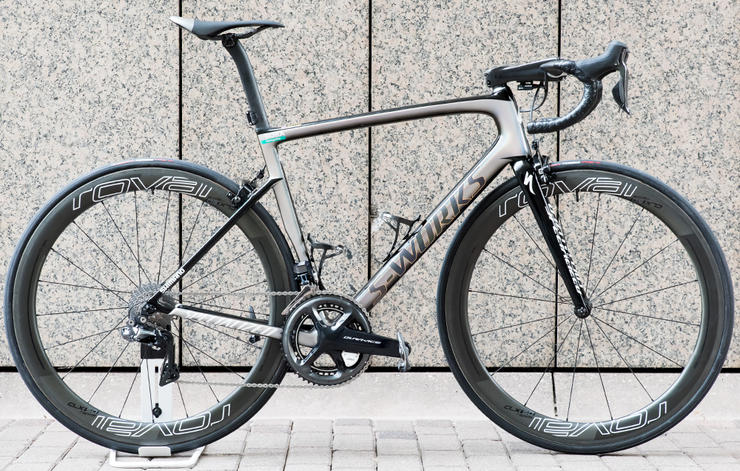 Five-time green jersey winner Peter Sagan completed stage two of the Tour aboard his customised 2018 Specialized Tarmac. Launched the day before the Tour’s July 1 kickoff, the new Tarmac features an all new frame design that’s more aerodynamic, and a significant weight reduction as well: a 56cm frame–Sagan’s size–carries a claimed weight of just 733 grams with the “ultralight” finish. 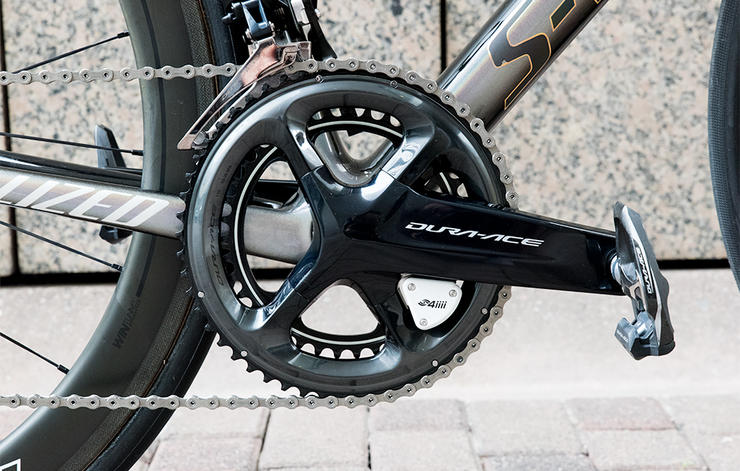 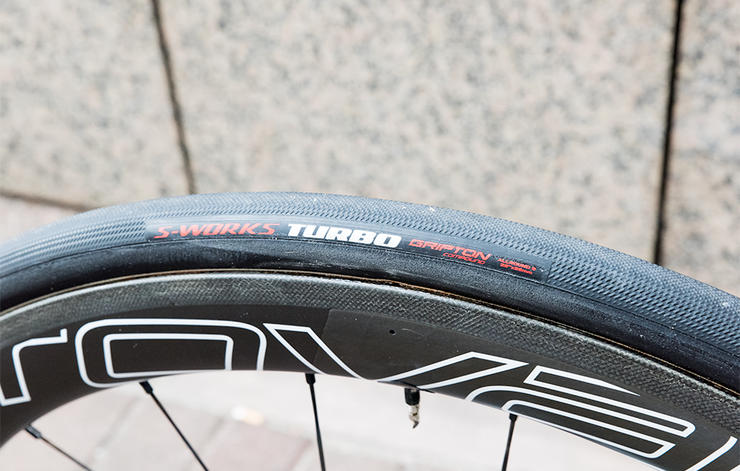 Though clinchers, and tubeless clinchers, have been spotted in the professional ranks more regularly of late, glue-on tubular tyres are still the choice for the majority of the peloton, Sagan included. Sagan rolls on 26mm-wide S-Works Turbo Allaround 2 tubulars from Specialized. 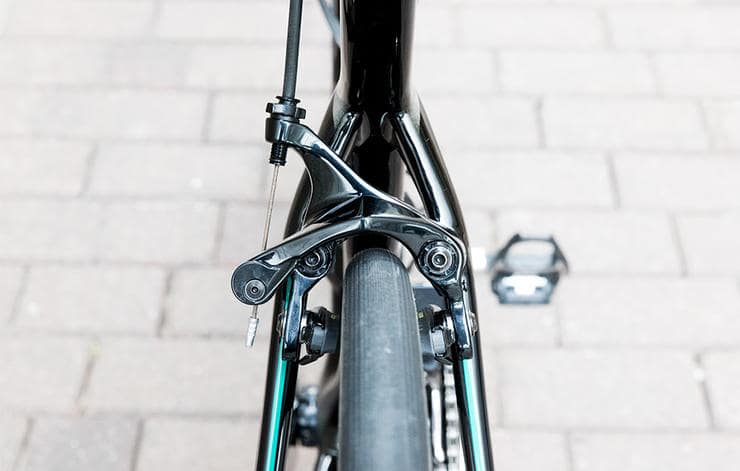 One of the most impressive details of the new Tarmac: room for up to 30mm tires with rim brakes. Even with Sagan’s 26mm-wide tyres, plenty of clearance remains. 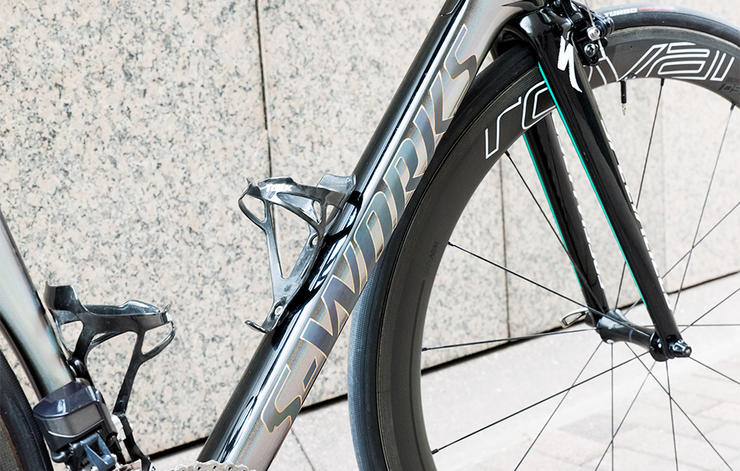 The finish on Sagan’s bike looks subtle at first, but a closer look reveals complex details. The silver has an iridescent quality that, depending on the light, reflects back the colors of the rainbow: an homage to Sagan’s World Champion jerseys. The outline of the “S-Works” logo appears gold, but it too changes colors as the viewing angle changes. Small touches of Bora-Honsgrohe’s team colour–a light green–provide tasteful accents. 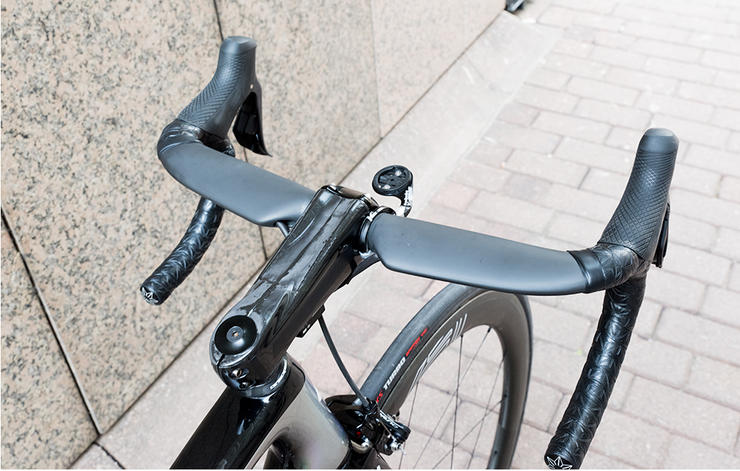 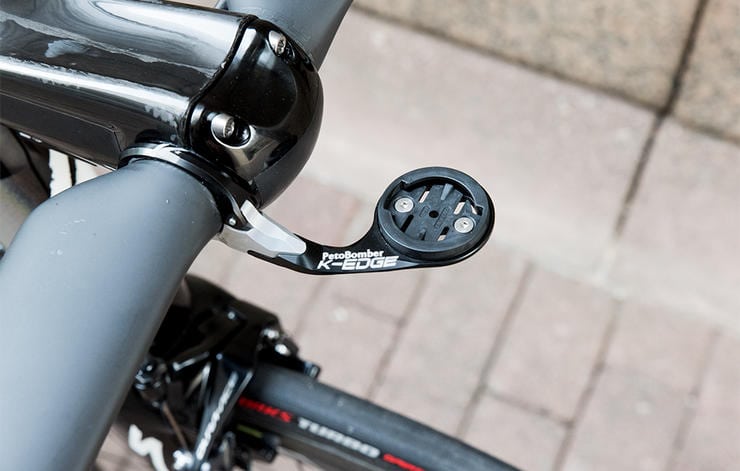 This K-Edge out-in front mount for Garmin Edge is laser etched with one of Sagan’s nicknames. 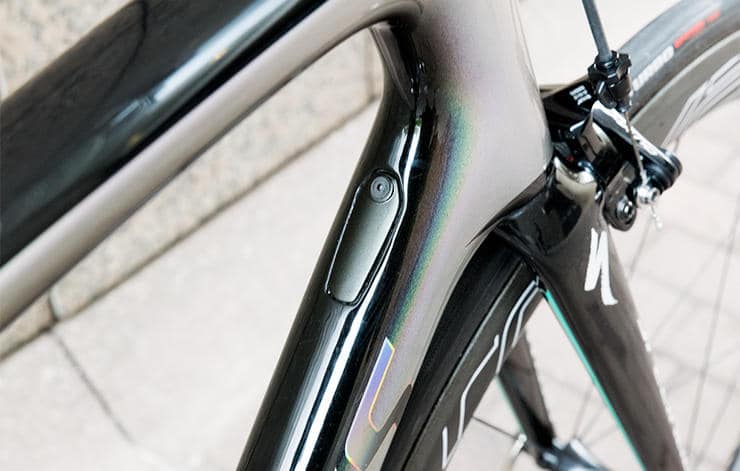 This port in the downtube is unused when running an electronic drivetrain like Sagan. When a mechanical drivetrain is used, the blank is swapped for a different insert that routes the derailleur cables through the down tube. 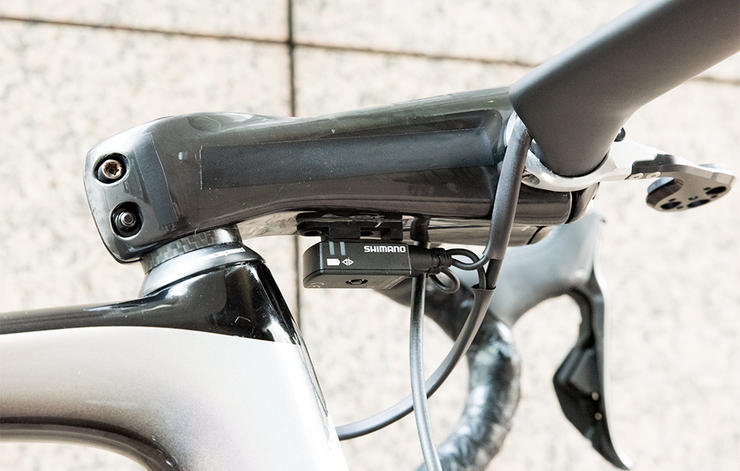 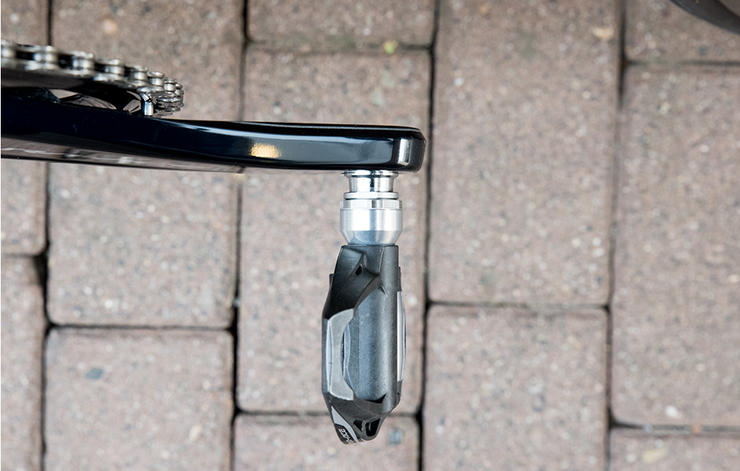 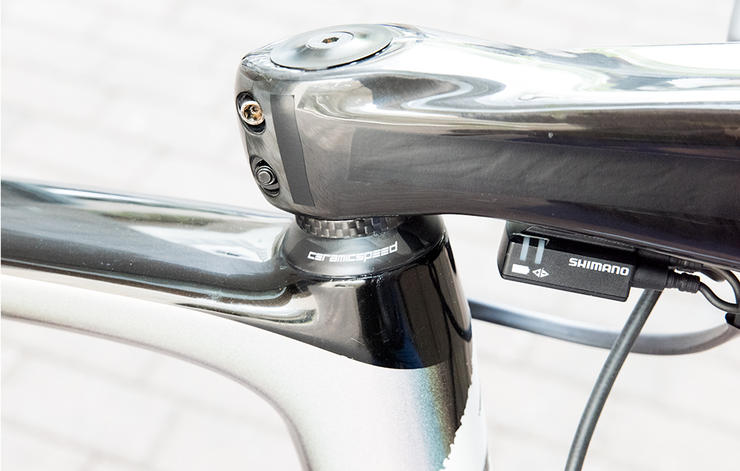 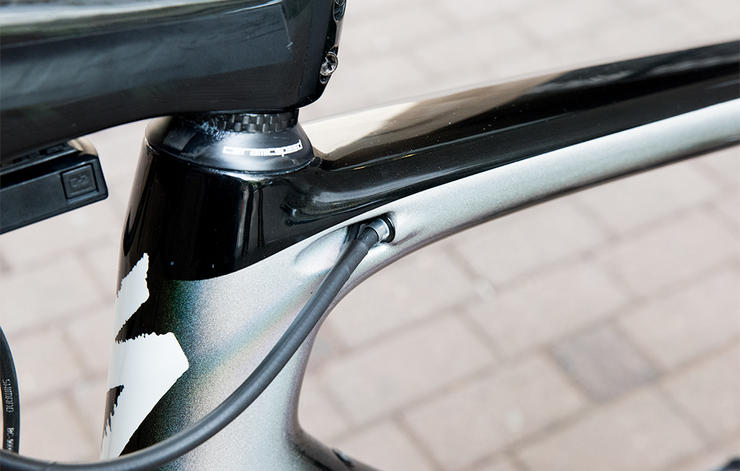 This entry port in the top tube does double duty. Both the brake cable and the Shimano Di2 wire-just visible behind the brake housing-enter though this hole. 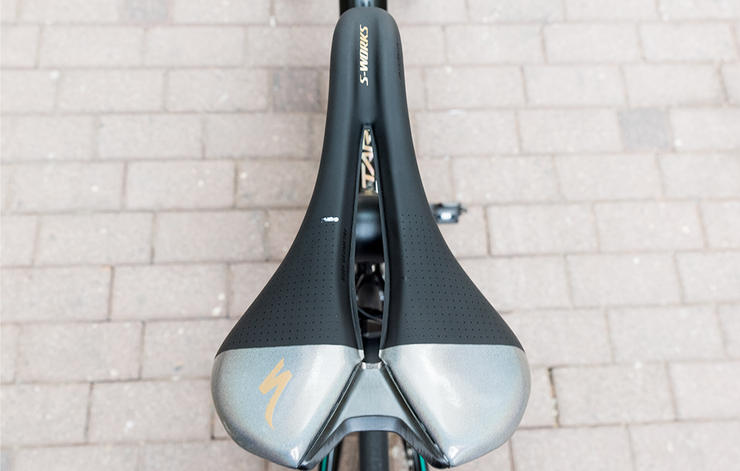 Sagan’s S-Works Romin Evo saddle is colour matched to his bike. The line in the center of the saddle was a reference point used by mechanics to ensure all Sagan’s bikes are set up the same. 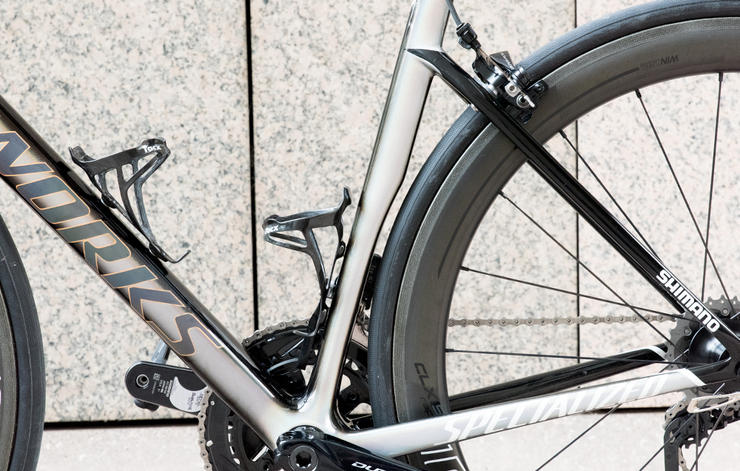 Some of the most obvious outward changes to the new Tarmac are the dropped seatstays and wheel cutout in the seat tube. 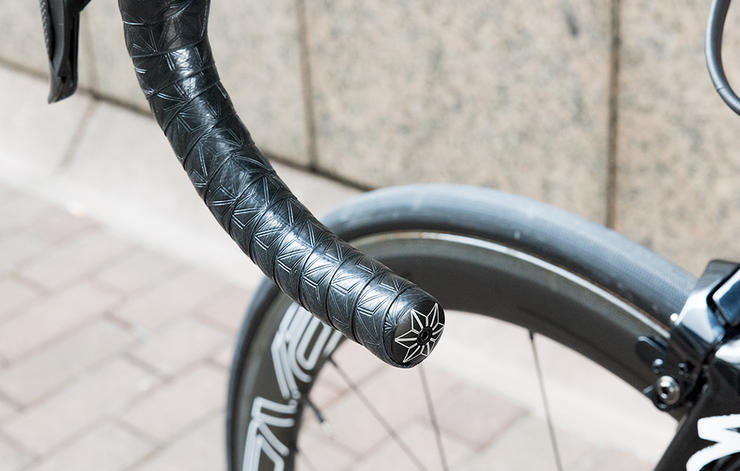 Like the Tinkoff team he rode for last year, Sagan’s new team uses Supakaz Super Sticky Kush bar tape. The tape has a sticky surface, and offers some cushioning. 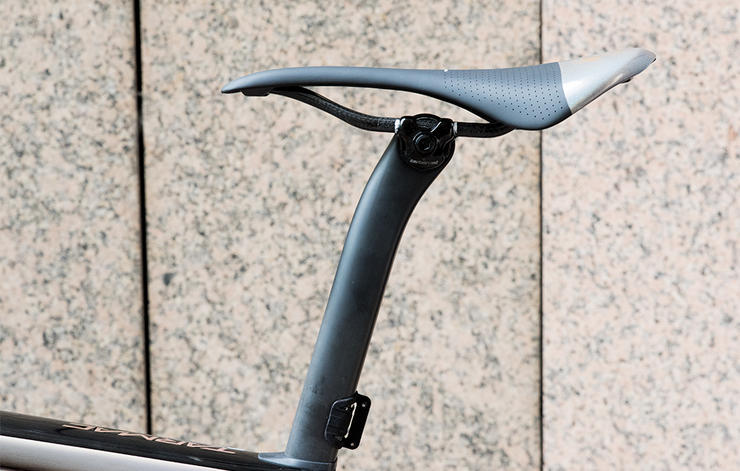 The new Tarmac uses a proprietary shaped seatpost–the previous model used a round 27.2mm post. The new post is both more aerodynamic and smoother riding than a round post, claim Specialized representatives. 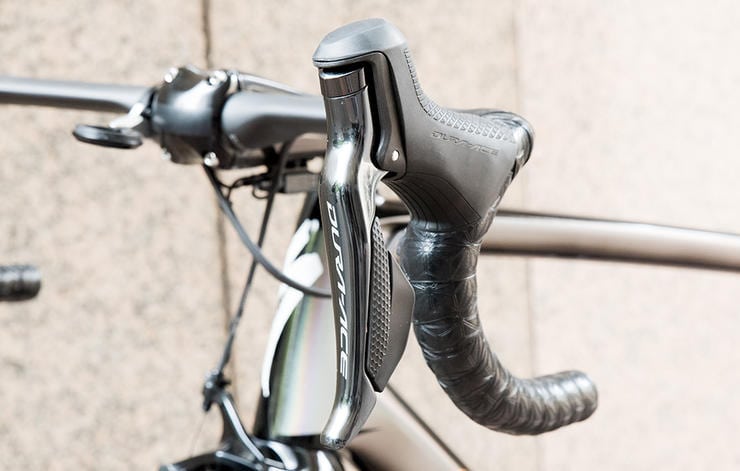 Sagan’s new Tarmac is built with the newest version of Shimano’s Dura Ace Di2 drivetrain. This group’s shifting performance is the standard by which all other groups are judged.