The ultimate upgrade is a new hoops - these wheel sets from Specialized and Santa Cruz will make you faster, and funner.

Carbon wheels are arguably one of the best and priciest upgrades you can make to your mountain bike. For six months, I rode and raced two of the most popular carbon wheel sets for cross-country and short travel trail bikes; the Roval Control 29 Carbon and Reserve’s 28 XC. Both wheel sets have the same goal, drop weight from XC bikes while improving ride quality and maintaining durability.

On paper, both wheel sets match each other closely. They have similar builds, similar weights, and both wheel sets are in the same price range. Both Reserve and Roval are, for lack of a better term, house brands of Santa Cruz and Specialized respectively. Being part of these larger brands means you’ll find them as stock equipment on a lot of high-end models from both companies while also hitting aftermarket price points that are hard to match by brands that solely focus on wheels and have a smaller OEM presence.

But, being good on paper is one thing; performance on the trail is what matters. So how do they compare in real life?

It’s All In The Details

Both wheel sets use DT Swiss 350 hubs with DT Competition Race spokes and to the delight of mechanics everywhere both have external nipples. This is important as it makes truing the wheels and replacing spokes much easier. Each wheel set uses an asymmetric rim design that is flipped front to rear which reduces the offset that would normally happen at the hub and in theory improves stiffness and durability. As expected both wheels use a hookless rim design. 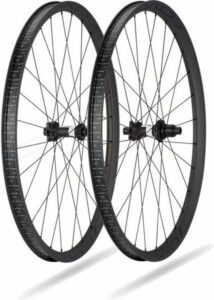 But this is roughly where the similarities end. Roval uses a straight pull version of the DT Swiss 350 hub with 28 straight pull spokes per wheel in a three-cross pattern. By contrast, Reserve went with the standard variant DT Swiss 350 hubs and 24 J-bend spokes in a two-cross lacing pattern for their wheels.

Internal rim width on each is appropriately modern for cross country wheels, at 28mm for the Reserves and 29mm for the Rovals. Reserve recommends using a tire that is between 2.2″ and 2.5”, while Roval says their wheels will support tires between 1.95” all the way to 2.6”.

Looking more closely at the Roval rim you’ll notice a larger than normal flat-top edge on the rim wall. This 4mm wide shelf is claimed to increase the necessary force to pinch flat a tire by 22% over a conventional rim shape. This is certainly a plus if pinch flats are a common issue for you or where you ride. (Un)fortunately, I can’t confirm this as I didn’t suffer a pinch flat on either wheel set. 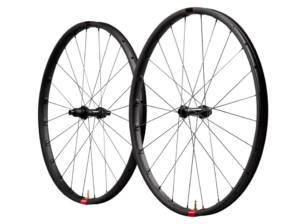 From the outside Reserve 28 XC rims use a fairly traditional, rounded rim shape. Internally the rims are hookless and the rim bed features a step-in design that should allow easier tubeless tire mounting. I can confirm that the Reserve rims were an absolute breeze to set up tubeless with the Wolfpack tires I used for testing. However, I didn’t notice the Rovals to be any less easy to set up.

On the scale, the Rovals win the battle, weighing in at 1 453 grams with tubeless tape and valves. The Reserves weigh in at just over 100 grams more (1 557g with tape and valves). The Rovals have a 125kg total system weight limit. Meaning the bike, rider, and gear together should not weigh more than that. Reserve on the other hand has no weight limit on their carbon wheels.

Both brands offer a lifetime warranty to the original owner of the wheels. Reserve has a more comprehensive and simple policy, stating that “Reserve will repair or replace at its option any Reserve rim made by Reserve Wheels that is damaged or destroyed by riding.” 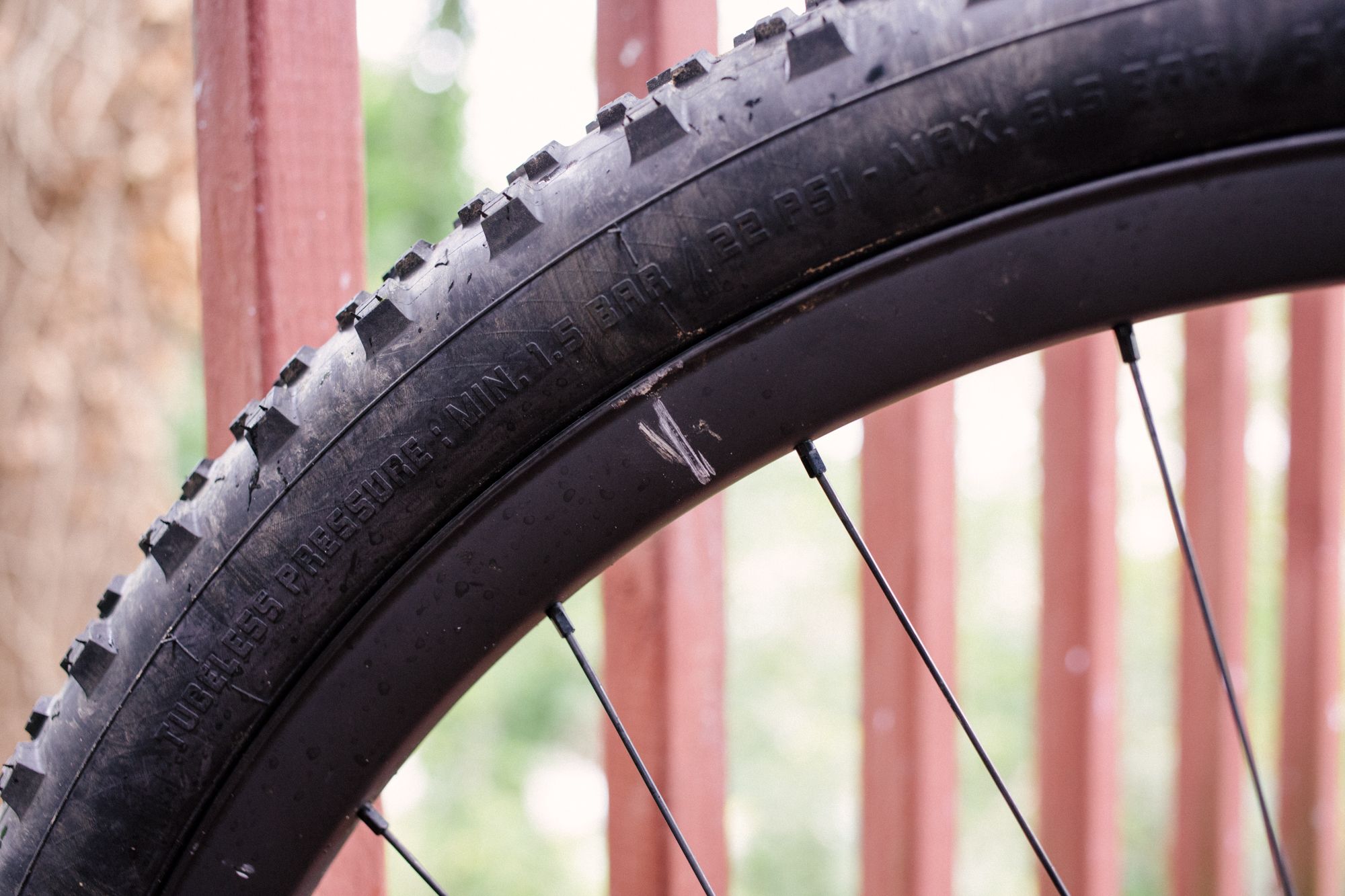 Roval’s policy is a bit more convoluted. It offers a lifetime warranty as well, but explicitly says that the warranty covers “defects in materials and workmanship when used normally in accordance with our published guidelines.” Underneath this legalese, is a paragraph titled “**it Happens No Fault Crash Replacement.” This policy promises to replace or repair your Roval wheel if you damage it in the first two years of ownership and whatever you did is not covered under warranty.

Basically, Reserve will replace your rim if you manage to break it while riding. Roval will do the same, but it’s only unconditional in the first two years; after that, a more general “defects in materials and workmanship” policy takes effect.

I rode both these wheels with a set of Wolfpack Race tires in 29”x2.4” size. The tires measured to the same width on both wheels (coming in at just a hair over the tire’s listed 2.4” width) despite the 1mm difference in internal rim width. I ran the tires at the same PSI on both wheels and tested them on the Scott Spark RC World Cup. I did my best to make the wheels be the only thing that changed as I swapped back and forth. 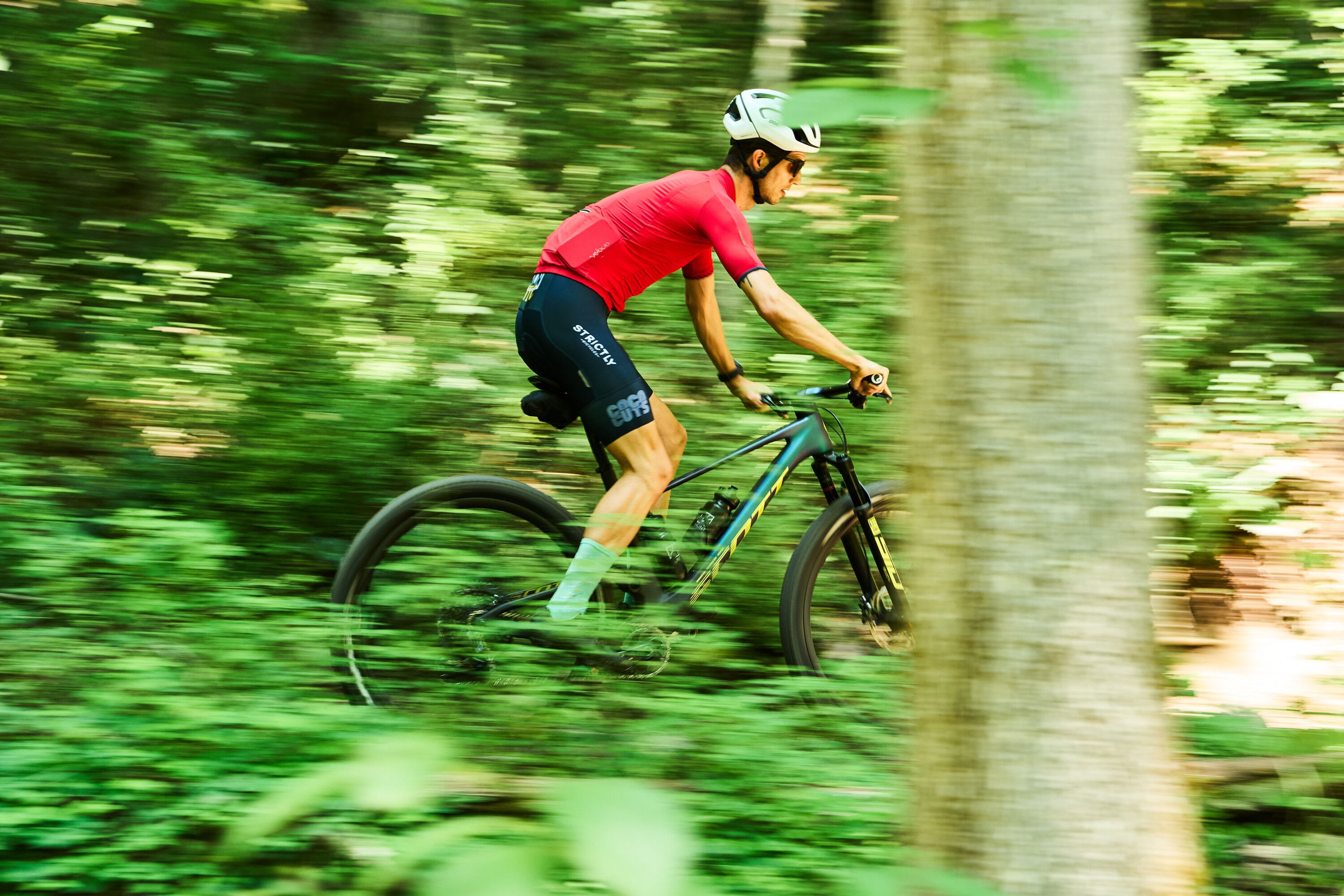 I accumulated roughly 250 trail kilometres on each wheel set and both wheel sets have managed to survive all of the root and rock smashing I could throw at them. Both the Roval and Reserve wheels have stayed true and round. I inflicted some cosmetic scrapes, but overall durability has been great on both wheel sets. 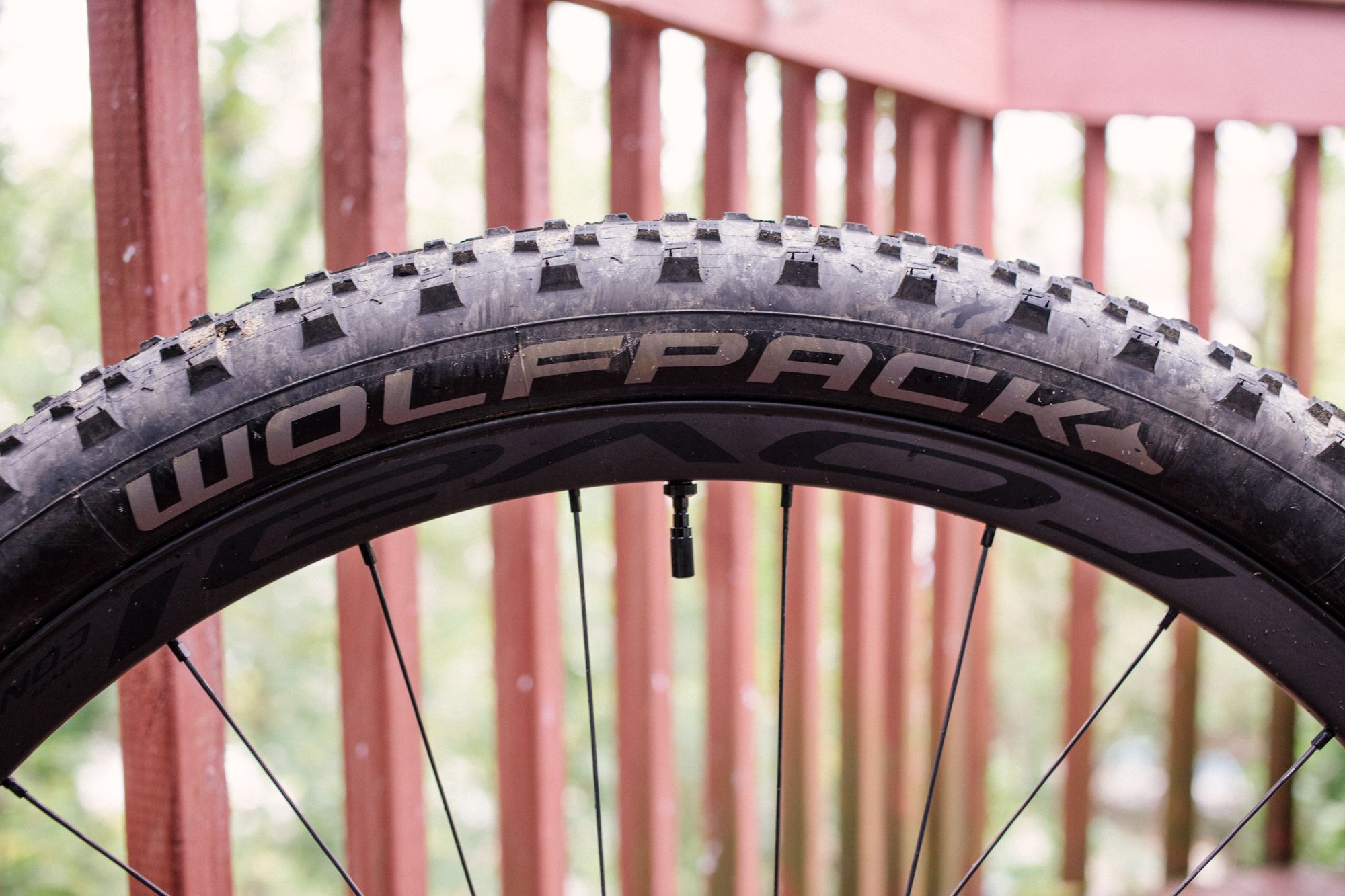 These two similar wheel sets have very subtle differences on the trail. But, there are definitely differences. In back-to-back rides, it became obvious to me that the Reserves rode smoother and felt quite a bit more complaint on the trail. In contrast, the Rovals felt a bit harsher. At first, this made me dislike the Rovals because I constantly felt like they were ping-ponging in between rocks, but dropping my tire pressure by a few PSI made a noticeable improvement in how precise the Rovals felt. 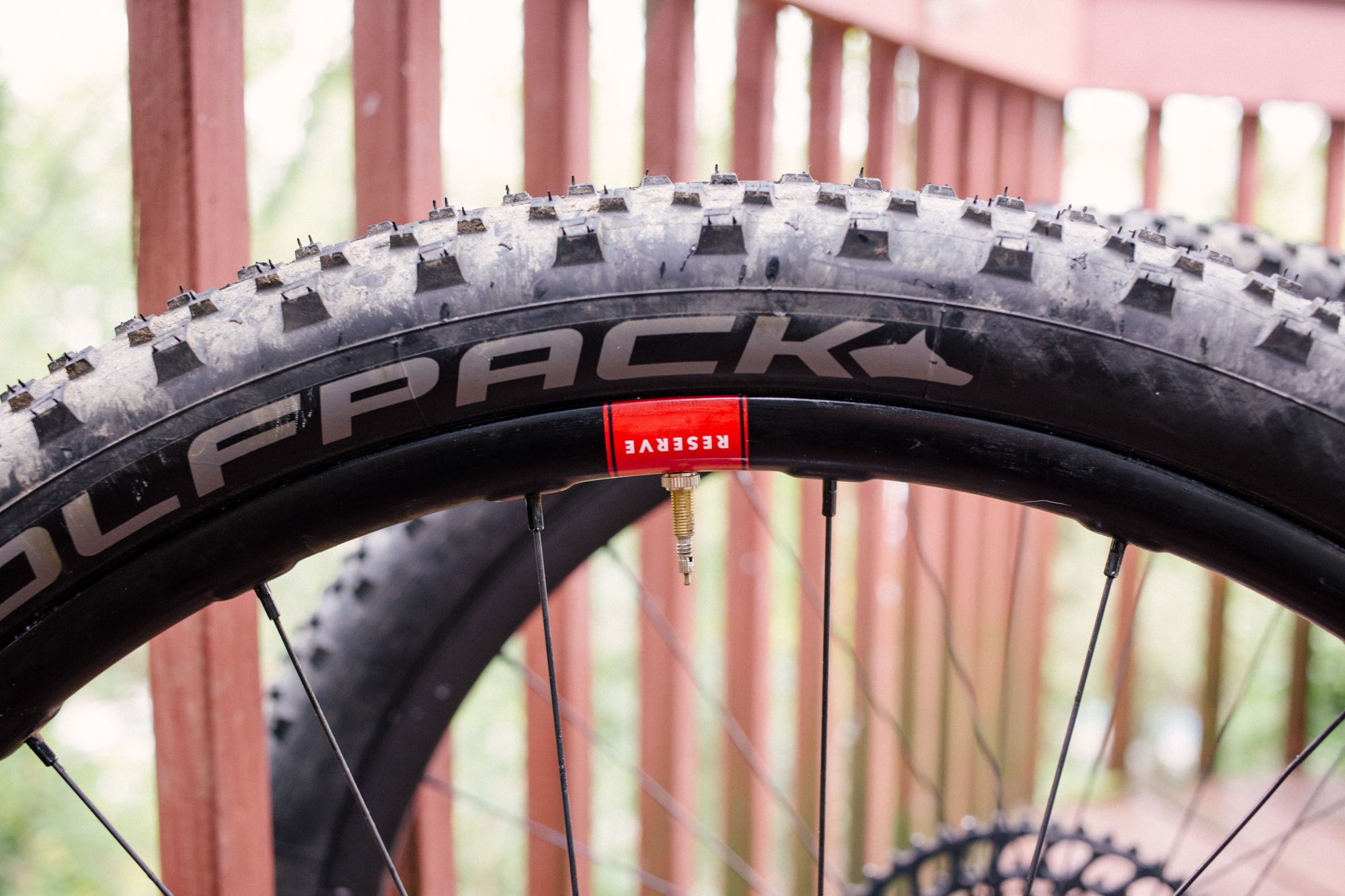 Despite the Rovals being about 100g lighter than the Reserves, I often felt faster both up and downhill on the Reserve wheels. This was purely a feeling, however, as my timed testing of the wheel sets showed zero actual difference. This proved to be more of a case of how I preferred my wheels to feel rather than measurable time saved on the trail.

The bottom line is that both of these wheel sets are really good. There are still enough differences between them; details that make them better suited to slightly different types of riders.

For larger weight riders or anyone that’s hard on equipment, the Reserves are the clear winner. The lack of a weight limit, plus an easy to understand lifetime warranty policy for the original owner. Makes them ideal lightweight wheels for riders that have avoided carbon wheels in the past due to durability concerns. Those who race or ride on rougher courses or over longer distances will also benefit from the more compliant feeling of the Reserve wheels.

Riders who are after the lowest possible weight, or are simply shopping on price will have a hard time not choosing the Rovals. They are 100 grams lighter and a bit cheaper. It’s a wheel set that is ideally suited for a rider needing cross-country race performance or a rider preferring a wheel set that feels stiff and responsive.