It may only be a wee little thing, but Garmin's Edge 130 Plus provides a monster amount of technology and reliability.

The Garmin Edge 130 Plus is a teeny GPS with an incredible list of features – almost everything you get with a bigger, more expensive Garmin like the 530, you get with the 130 Plus.

With the necessary strap and sensors (sold separately) this Garmin Edge still tracks all your personal ride metrics – heart rate, elevation, speed and cadence, for example. Although it doesn’t give you a full map, as with the more pricey Garmins you can still load a route, and it’ll give you direction prompts on a breadcrumb trail. We tested this on a 120km gravel ride in the Boland, and it worked very well.

Battery life was great, with 40% still remaining after five hours in the saddle. (Tip: turn off the automatic Bluetooth connection if you’re doing a long ride, unless you really want notifications from your phone beamed to your handlebar. The battery will last a lot longer.) 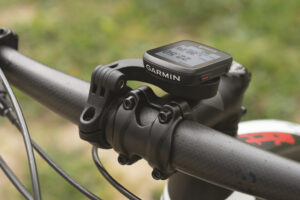 The Garmin Edge 130 Plus also adds some new features that seem wacky at first, but quickly become addictive. ClimbPro is one of them – when you’re following a route and you hit a big hill, a graphic appears automatically that shows you how much further you still have to go, and how much vertical elevation remains. It triggered on the climb up the flank of Paarl Rock – the first time I’d done that particular climb – and I was able to manage my effort accordingly.

It also comes with an accelerometer, which is used for crash detection (another useful new feature) and mountain-biking metrics – like measuring the number of jumps you’ve pulled off, the distance of those jumps, and your overall hang time. Seriously! As with other Garmin devices, everything integrates with the Garmin Connect mobile app, which in turn pairs with third-party apps such as Strava. Best of all is its size: it weighs only 33g, and can be accommodated on even the busiest handlebar.