Predicting the stage winners at the Tour de France is a mug's game, but why the hell not! Irish speedster Sam Bennet is our man for the opener in 2020.

The best part of our annual Tour de France viewing is predicting the winner each day, and seeing how close our crystal ball can come to cycling prescience. To date – we have only been doing this for 35-odd years – our best effort has been six outright stage wins. Not too shabby. But that was a good year… let’s see what 2020’s brutal route allows. 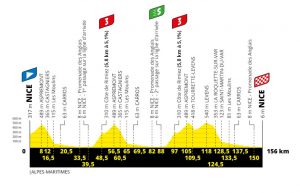 The Tour often starts with a prologue – a very short time-trial to decide the first wearer of the Yellow Jersey. 2020 doesn’t; instead, a short-ish stage that takes in a few shorter hilly loops around Nice, and a longer one (also classified as hilly) to end matters, but with the finish nearly 60km from the second summit of the Côte de Rimiez, a 5.8km/5% Cat3 that is sure to see a small group of skinny journeymen skip off the front early on to snag the first Polka Dot Jersey of the Tour, predicting a winner here is more fun than usual.

The 2020 route has fewer stages built for the sprinters than we have got used to, so even though there is a distinct lumpiness to this opening gambit, we expect the teams of the fast men (and the fast men themselves) to put a fair amount of effort in to stay in contact over the two main climbs, for a bunch finish. In the grand scheme, this is an insignificant climb, but with fresh day-one legs, two ascents, and the potential for coastal wind, the true sprinters might well waste a lot of energy getting back on in the long run into the finish. A perfect day for the all-rounders – the Peter Sagan, Wout Van Aert kind of strong man, who still packs a sprint. But, this is no ordinary stage, and predicting a winner is not so simple: the winner gets to pull on the Golden Fleece, too, so the motivation will be extra high for the faster men, too. Giacomo Nizzolo is in stellar form (the NTT star wears the starred European Champion jersey after taking that title a few days before the start of the Tour), Bryan Coquard is there, as is Andre Greipel. But we have to put our predicting money somewhere: Sam Bennet is our man for this first stage, with Nizzolo, Coquard and Sagan banging on his back door. 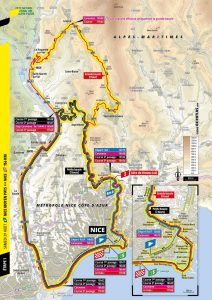