This is the innovative, aero, and lightweight tech teams are using to gain an advantage over their

This is the innovative, aero, and lightweight tech teams are using to gain an advantage over their rivals. – Matt Phillips 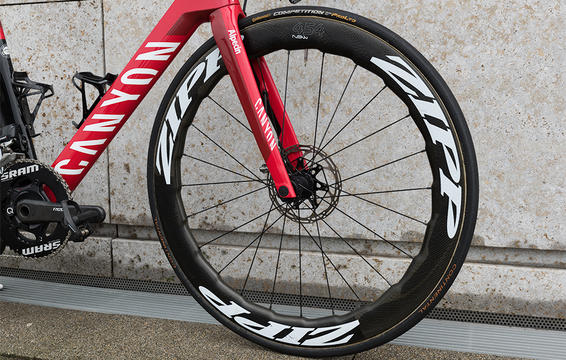 For the first time, disc brakes are allowed in the Tour de France. We’ve seen Cannondale’s Super Slice Disc, and Marcel Kittel collected five stage wins on disc brakes. Some riders on the SRAM-sponsored Katusha team also have disc brake bikes in the truck, but so far they’ve seen limited use. Which is a shame, because they look amazing, and they’re built up with SRAM’s excellent eTap HRD parts and Zipp’s 454 NSW disc wheels. 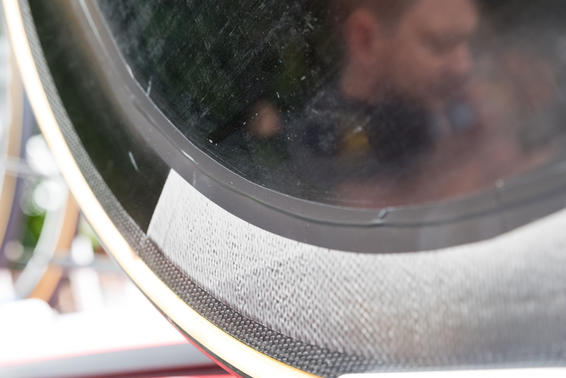 We spotted this unmarked Vision disc wheel on a Cofidis team bike. When reached for comment, a Vision representative stated, “This was a special prototype in clincher made for [Nacer Bouhanni] with a super light rear disc wheel to be tested on the Track during January in the last training camp in Spain. But this was just for test and comparison, because Nacer wanted to use a super light TT Bike. Evidently, they like this wheel and decided to use during the TDF.” When asked about the electrical tape’s function, the representative remarked, “Not entirely sure…” 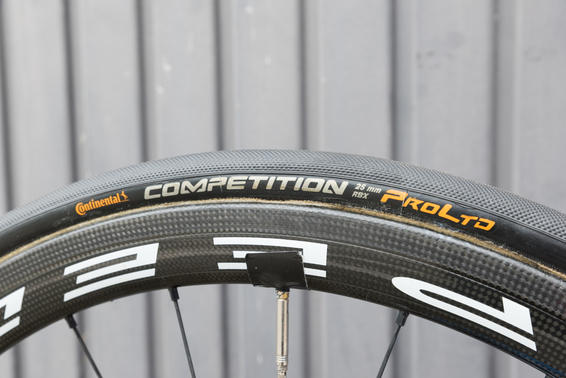 Of the 22 teams in the Tour, nine are sponsored by, or use, Continental tyres—the most of any tyre sponsor. But, with a few exceptions, the teams do not use off-the shelf Conti tyres. Instead, teams get the company’s PROLTD tyres, which can use a different tread pattern, rubber compound, casing, or tube material (or all of the above) from Conti’s publicly available tyres. 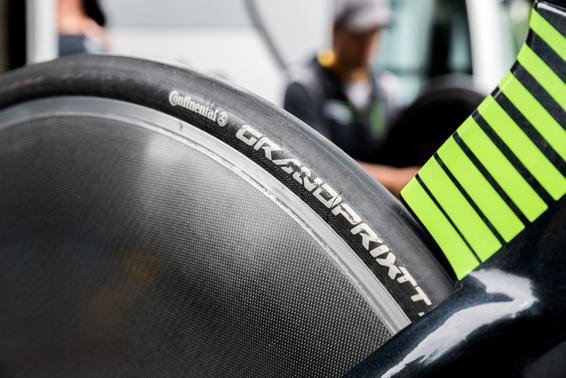 Team Dimension Data typically uses wheels from sponsor Enve Composites. But Enve doesn’t yet have a disc wheel ready for the team to race. So at the opening time trail, the team’s Cervelo time-trial bikes were equipped with a HED disc wheel. A closer inspection revealed some Dimension Data riders were using the HED Jet Disc: a clincher wheel with aluminum brake track. 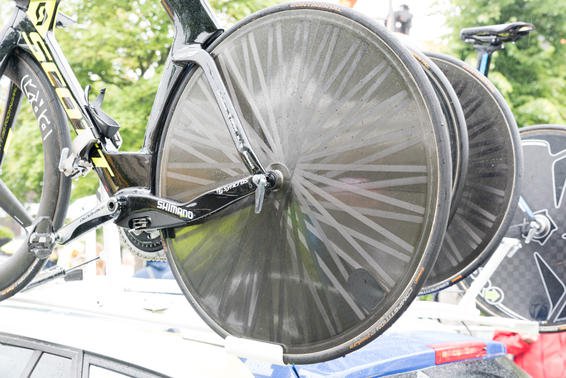 Team Orica Scott is sponsored by Shimano, and typically uses TT wheels from the company’s PRO division. But a few bikes at the opening time trial were spotted using Lightweight’s 780 gram Autobahn disc wheel. A weight savings of nearly 300 grams is likely the reason some riders prefer the Lightweight Autobahn over PRO’s 1050 gram disc wheel. 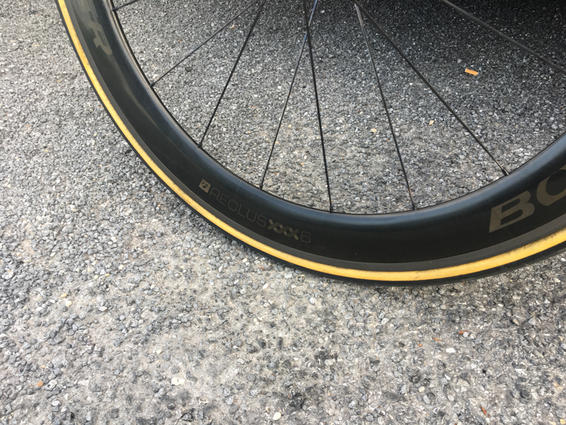 Give Bontrager’s wheel catalogue a quick scan and you’ll see an Aeolus 9, 7, 5, and 3, but no Aeolus 6. Which means we’ve stumbled on a yet-to-be-released wheel in the Trek Segafredo pits. If Bontrager’s naming convention continues–Aeolus 3 is 30mm deep; Aeolus 7 is 70mm deep, etc.–the Aeolus 6 will be a 60mm deep wheel (about the same as a Zipp 404). 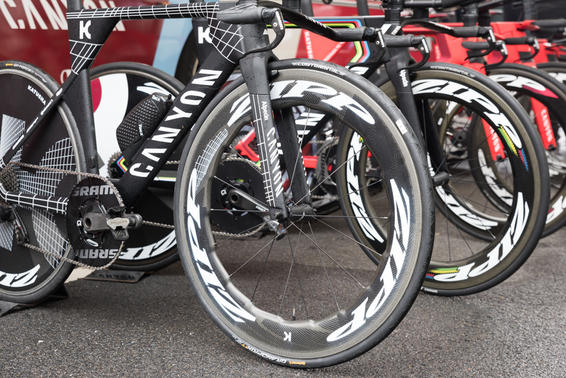 Tony Martin’s Kraftwerk-inspired TT bike was a feast for the eyes. And hiding in plain sight on the front is what looks like a new 808-depth Zipp wheel with Hyperfoil nodes that made a splashy debut on the 454 NSW wheelset. 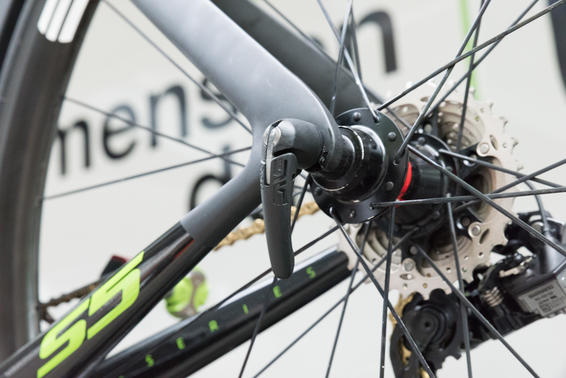 Team Dimension Data’s bikes were equipped with Enve’s new internal-cam QRs, which, in our opinion, are a huge step up from Enve’s previous generation external cam QR’s. We note significant similarities between this new Enve QR, and Mavic’s QRs (Mavic’s parent company purchased Enve in early 2016). 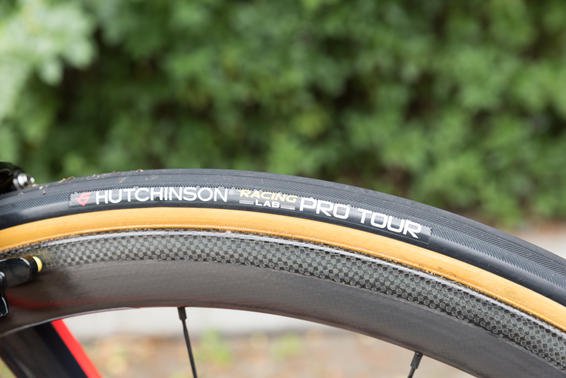 Team Direct Energie’s bikes were rolling on these Hutchinson Racing Lab tubulars. It doesn’t match any tire in Hutchinson’s current catalog, and appears to be a “handmade” (non vulcanised) style construction, that was, perhaps, made in another tire-brand’s factory. 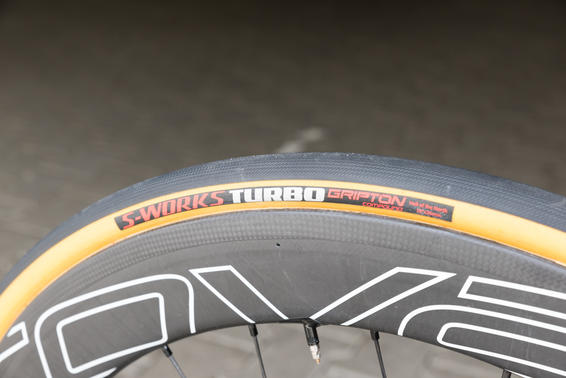 Marcel Kittel rides Specialized’s Hell of The North tubulars. These tyres are tougher than Specialized’s standard racing tubular, and were primarily designed for the demanding conditions of the Spring Classics. Though publicly available in a 28mm width only, Kittel’s tyres are marked 26mm. 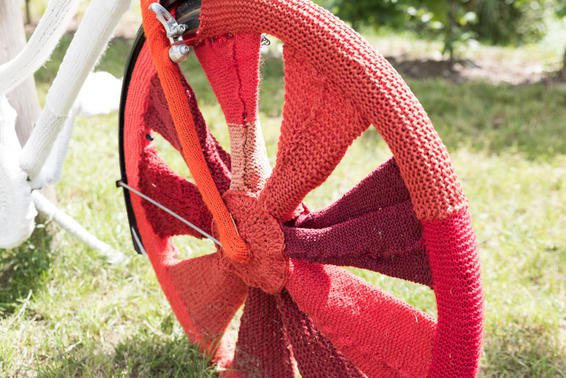 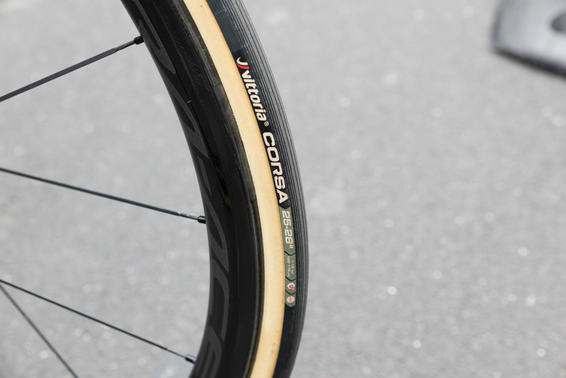 While Conti has the most teams in the tour (nine), Vittoria has the second-most with six. On road stages, Vittoria’s teams were riding the Corsa tubular in the 25mm width. 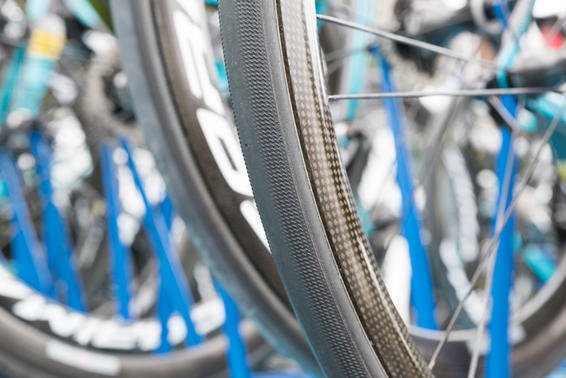 In 2016, Astana was sponsored by Specialized. That arrangement ended for 2017, and Astana has many new sponsors including Argon 18 frames and Schwalbe tyres. The team is still burning through some old equipment though: we spotted these Specialized tubulars–logos blacked out, of course–on top of one of Astana’s team cars. 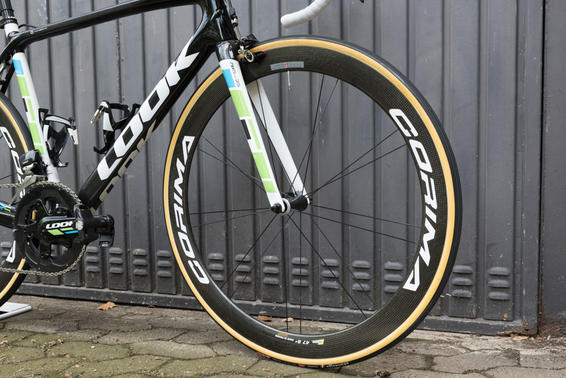 Look (of France), purchased boutique wheel maker Corima (of France) in early 2016, so it makes sense Look-sponsored Fortuneo-Oscaro would use Corima wheels. Corima isn’t a huge name in the States, but the little company’s French-made wheels have notched some impressive results: the 2014 Tour de France (Nibali); the 2015 Vuelta (Aru); the 2016 Giro d’Italia (Nibali); and the 2017 Critérium du Dauphiné (Fuglsang). 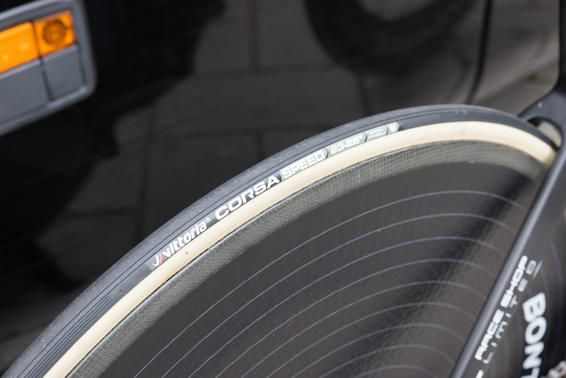 While the peloton has switched to 25mm and wider tyres for road stages, 23s still can be found on TT bikes, but even there the numbers are dwindling. 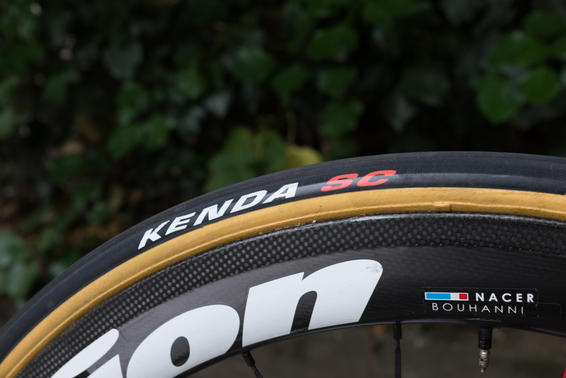 Much like the situation over at Direct Energie, Kenda- sponsored Cofidis uses a Kenda- badged tyre that doesn’t appear in the company’s current catalogue. It appears to be a handmade (non-vulcanised) tubular, possibly made by another tyre-brand. In fact, it looks almost identical to the tyres on Direct Energie’s bikes. 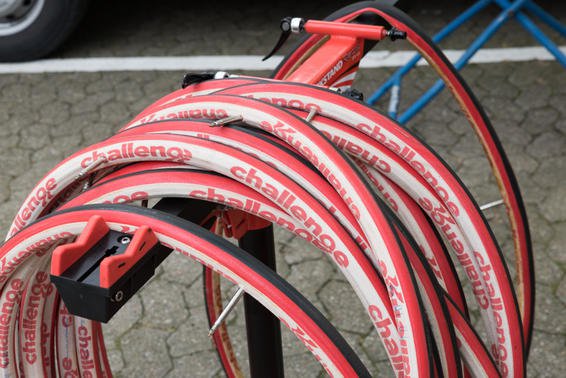 These Challenge Record tubulars with striking team-only red sidewalls were set aside in the Fortuneo-Oscaro pits while mechanics fitted different tyres to the team’s TT bikes for the opening time trial. While the team would typically ride the Record tubular for a time trail, according to a Challenge representative, “When we saw the rain we suggested they ride Strada instead as the dimpled Record tread is a little sketchy with wet roads. Result was good, no crashes.” The team should be on the red-sidewall Records for the stage 20 time trial in Marseille. 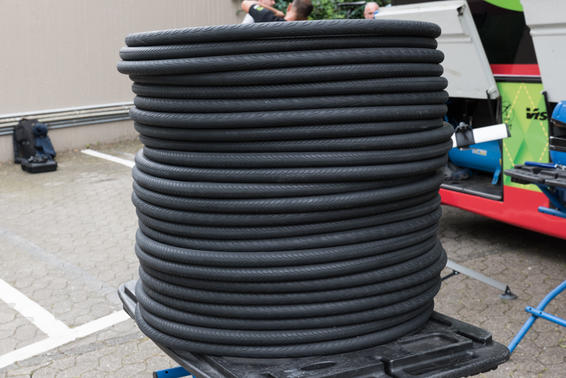 Cannondale-Drapac’s mechanics were in a gluing frenzy leading up to the tour. Mavic had delivered the team a fresh batch of Yksion tubulars with a new compound that, according to a Mavic representative, offered improved traction, especially on damp and wet roads. 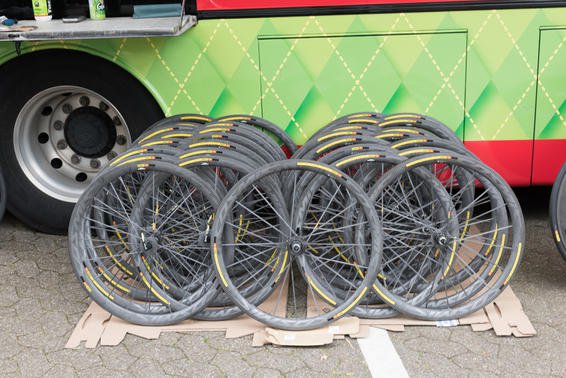 They may be just casually resting on the side of the Cannondale-Drapac truck, but you’re looking at over R1.5mil worth of wheels (30 Mavic Cosmic Ultimate wheels). 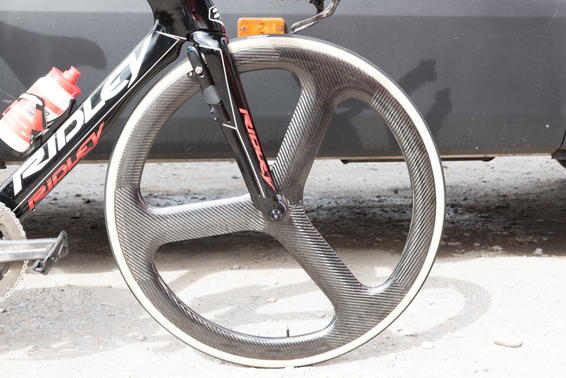 For the opening time trial, some riders on Campagnolo-sponsored Lotto Soudal were running these ancient-looking tri-spoke wheels scrubbed of any logos. They definitely weren’t Campy wheels – the company does not make a tri-spoke.