You wouldn't trade those hours on the bike for anything, but sometimes, being hunched over the handlebars for miles on end leads to tight, achy muscles. The good news: You don’t have to shell out for weekly cycling-specific massages to fix the kinks.

You wouldn’t trade those hours on the bike for anything, but sometimes, being hunched over the handlebars for miles on end leads to tight, achy muscles. The good news: You don’t have to shell out for weekly cycling-specific massages to fix the kinks. – By Laurel Leicht 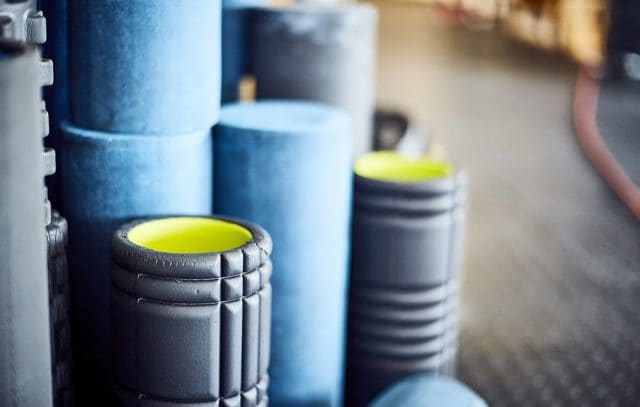 Foam rolling, a form of self-massage that breaks up knots in muscles and surrounding connective tissue (called fascia), “is great for recovery and has the ability, when coupled with the right exercises, to improve your posture and functional performance,” says David Reavy, a physical therapist and founder of React Physical Therapy in Chicago, Illinois. All that’s required is a high-density foam cylinder, and a bit of time spent working your muscles over it.

The process seems simple enough, but it’s easy to use improper technique when starting out—which leads to ineffective recovery, and possibly injury. Below, we explore the most common foam rolling mistakes, plus expert tips for how to fix them. 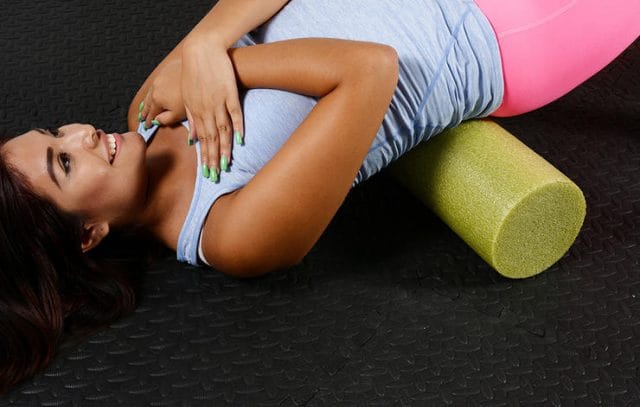 ROLLING OUT YOUR LOWER BACK OR NECK
Why It’s Bad: Placing a foam roller beneath your lumbar spine (aka lower back) or neck can cause strain and hyperextension, says Justin Russ, CSCS, a strength and conditioning coach and TriggerPoint master trainer in Florida. “Doing this can produce more stress on the spine by taking it out of neutral posture,” he says. “Whenever you’re rolling, it’s important to stay stable through the core and maintain spinal integrity.”

What to Do Instead: If you have discomfort in your lumbar spine, work on releasing knots in your hip flexors, quads, and upper back instead, Russ suggests, as tightness in these areas often leads to aches in your lower back.Pain in your neck? That’s often caused by tightness in your trapezius (the muscle in the center of your upper back and shoulders), which is a much safer muscle to massage.

ONLY ROLLING UP AND DOWN ACROSS A KNOT
Why It’s Bad: You risk making the problem worse. “If you only roll up and down over a painful knot, the muscle will react by reflexively tightening up further to protect itself,” says Reavy.

What to Do Instead: While you’re working an area, stop rolling and move that muscle in its range of motion with pressure applied to it to dig into the knot, advises Reavy. For instance, when you hit a tender spot on your quad, stop there and—maintaining pressure with the roller—bend and extend your knee until you feel the knot start to relax. 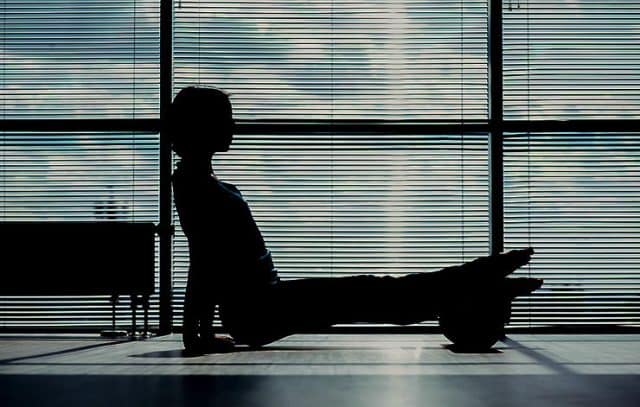 ONLY ROLLING AT NIGHT

Why It’s Bad: It’s not necessarily wrong to roll out in the evening; in fact, doing so can relax your body and lead to better sleep, says Reavy. But not rolling in the morning or before your ride means your muscles won’t function as well as they could throughout the day.

What to Do Instead: Roll right when you wake up, or at least before you head out for a ride or other workout. “Releasing your muscles first thing in the morning will allow for improved use of your entire body more efficiently for the rest of your day,” says Reavy. “Doing so will help increase your range of motion and motor control, and improve your flexibility.” 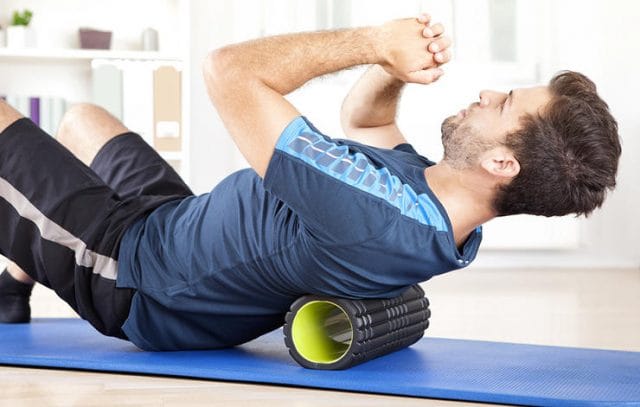 STARTING YOUR ROLLING SESSION ON MUSCLE THAT FEELS TIGHTEST
Why It’s Bad: The muscle that feels tight or hurts is often not the muscle that you need to unwind. For instance, hip flexors (which are often tight and overworked in cyclists) can cause a lot of discomfort elsewhere, says Reavy. “The hip flexors cross eight joints and when they become too tight, they limit the mobility in all of these joints,” he says. Plus, tight hip flexors pull your pelvis forward, which leads to sticking out your butt and decreasing the effectiveness of the abs and glutes. When your glutes and abs aren’t firing up correctly, it puts extra strain on your quads while you ride.

What to Do Instead: Regardless of where you notice tightness, start rolling by unwinding your hips, then move out to your glutes, hamstrings, mid- and upper back, and then quads, suggests Russ. 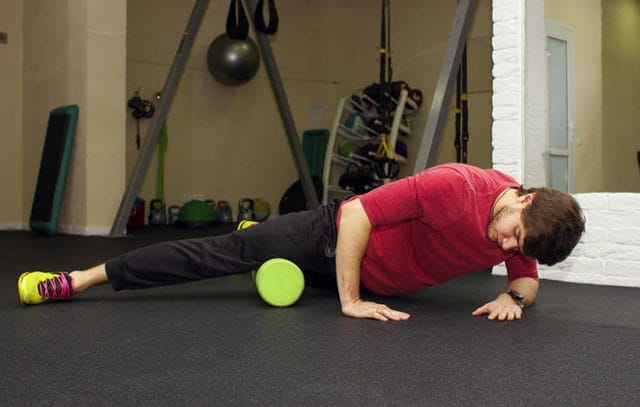 ROLLING TOO QUICKLY
Why It’s Bad: Just as with only rolling up and down on a muscle, you risk causing a muscle to tighten up if you roll too quickly. Plus, rolling too quickly means you likely won’t be able to target the deep tissue where tightness is really a problem. “It will only address the superficial layers of fascia and not induce the positive change in the muscle tissue that we’re looking for,” Russ says.Typically it takes 30 to 60 seconds of rolling in one spot on a tight muscle to get it to relax, says Reavy. “In the beginning, it might take you longer to release a muscle, depending on how tight or inflexible you are to begin with,” he says.

What to Do Instead: Reavy advises spending a full 30 minutes on foam rolling during a rest or recovery day, followed by stretching.

If you only have a few minutes to devote to rolling, your time is better spent releasing just a few muscles in a slow, controlled way. Reavy recommends cyclists target the quads, glutes, upper back, and calves. 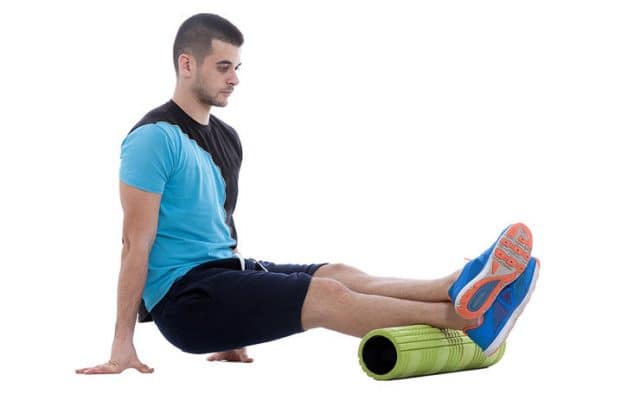 STAYING ON A TIGHT MUSCLE TOO LONG
Why It’s Bad: If a knot doesn’t seem to be releasing, continuing to work on it will likely just cause more soreness. “You can end up with brusing or get injured,” warns Reavy.

What to Do Instead: “If a knot won’t release, try working above or below that muscle instead,” he says. For example, if you hit a stubborn knot in your quads, roll just outside of it, or work more on your hip flexors. “It can be better to work around the affected muscle to get to it,” he says.