Who Invented The Bicycle? Good Question – Many Answers.

Who invented the bicycle? Sounds like an easy question to answer, but it is actually quite a complicated one.

Giving credit for who invented the bicycle is akin to trying to credit one single person for inventing the modern-day automobile, or any other multi-part machine. Does the invention of what we know as a car start at the wheel, at the cart, or at the creation of the first engine? For bicycles, do we start the timeline at the wheel, or at the velocipede, which looks like a bike but is a glorified scooter? Is it at the high-wheel, the first time a two-wheeled mode of transportation was equipped with pedals?

“Of course, crediting a single inventor of the bicycle is a sticky subject, debated by some over many years,” says Leon Dixon, a longtime cycling historian. Dixon is also known as King of the Classics, thanks to his impressive collection of old bikes and bike memorabilia, and he has traced the roots of the bike back centuries. That could explain why at the most recent International Cycling History Conference, one of the papers presented was titled, “A Story Before History, or How the Bicycle was Conceptualized Over Time (a Play).”

And that’s why, like so many other inventions, we go way back to Leonardo Da Vinci when discussing who invented the bicycle—although in this case, rather than being the first to imagine the bike, Da Vinci was at the centre of a forgery scandal in the late 20th century after drawings surfaced depicting an early version of a bicycle and credited to the Renaissance master. In a series of heists and forgeries and Codexes that read like a dull version of The Da Vinci Code, the drawing of a bike attributed to Da Vinci was sadly revealed to be a hoax. (You can read the full version of events at CyclePublishing.com.) 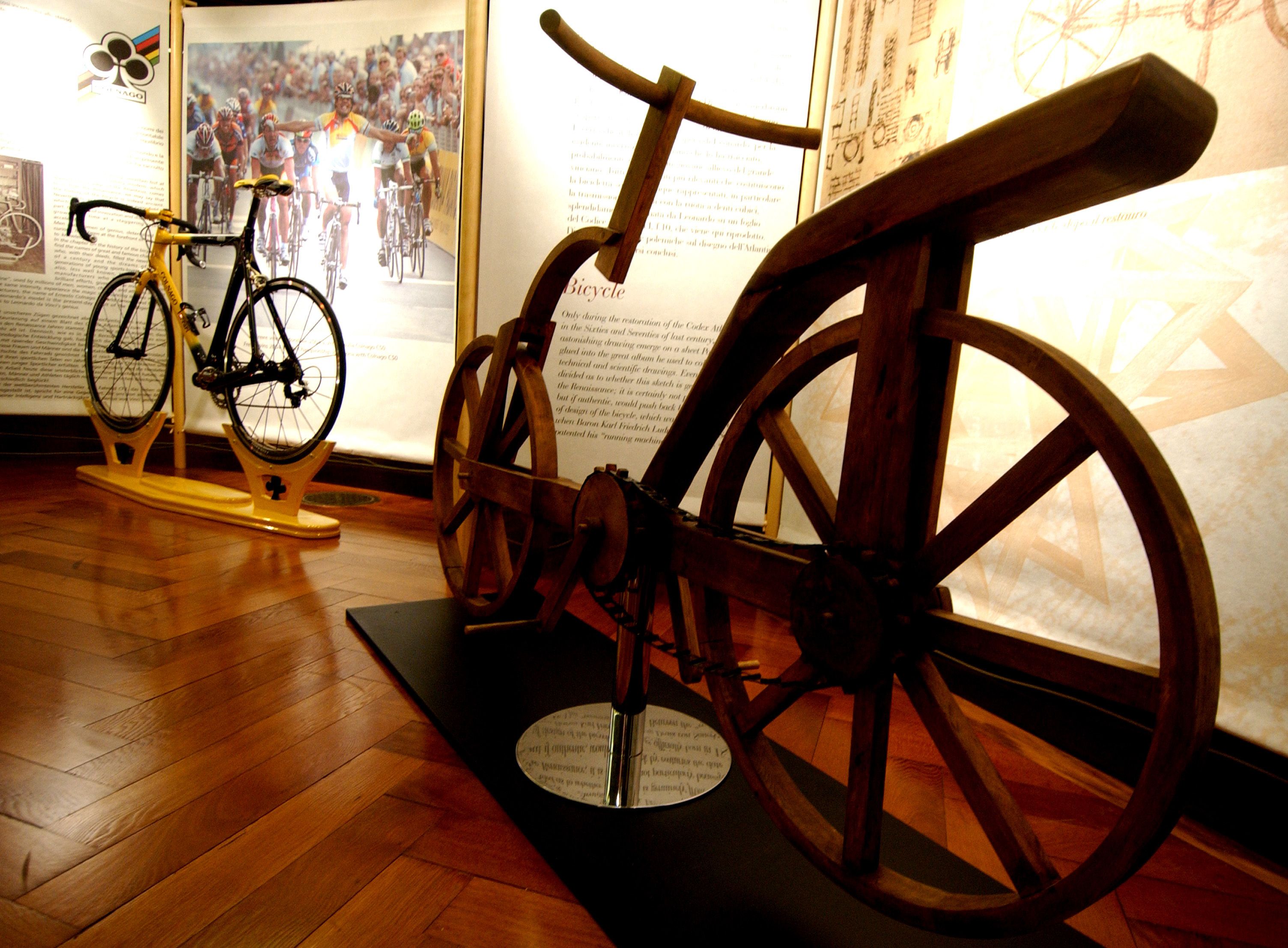 So if it wasn’t Da Vinci who first developed the idea for inventing a bicycling, then who did?

The Smithsonian credits the Comte de Sivrac in 1791, when he reportedly invented a two-wheeled scooting-style bike in Paris. This early iteration of the bike had two mounted wheels that could not change direction: The handlebars and front wheel could only point forward, making it a highly impractical, though fun, invention.

The Exploratorium in San Francisco credits Baron Karl (or Charles, depending on the source) Drais as having invented the hobby horse, or “Draisienne,” in 1817. The hobby horse was a two wheeled machine with a saddle that was propelled forward in a Fred Flintstone fashion. It differed from de Sivrac’s design by adding the ability to turn the handlebars and front wheel, which made the bike capable of turning and cornering. Designed for adults, this early bicycle iteration is similar to modern day Strider bikes for small children. 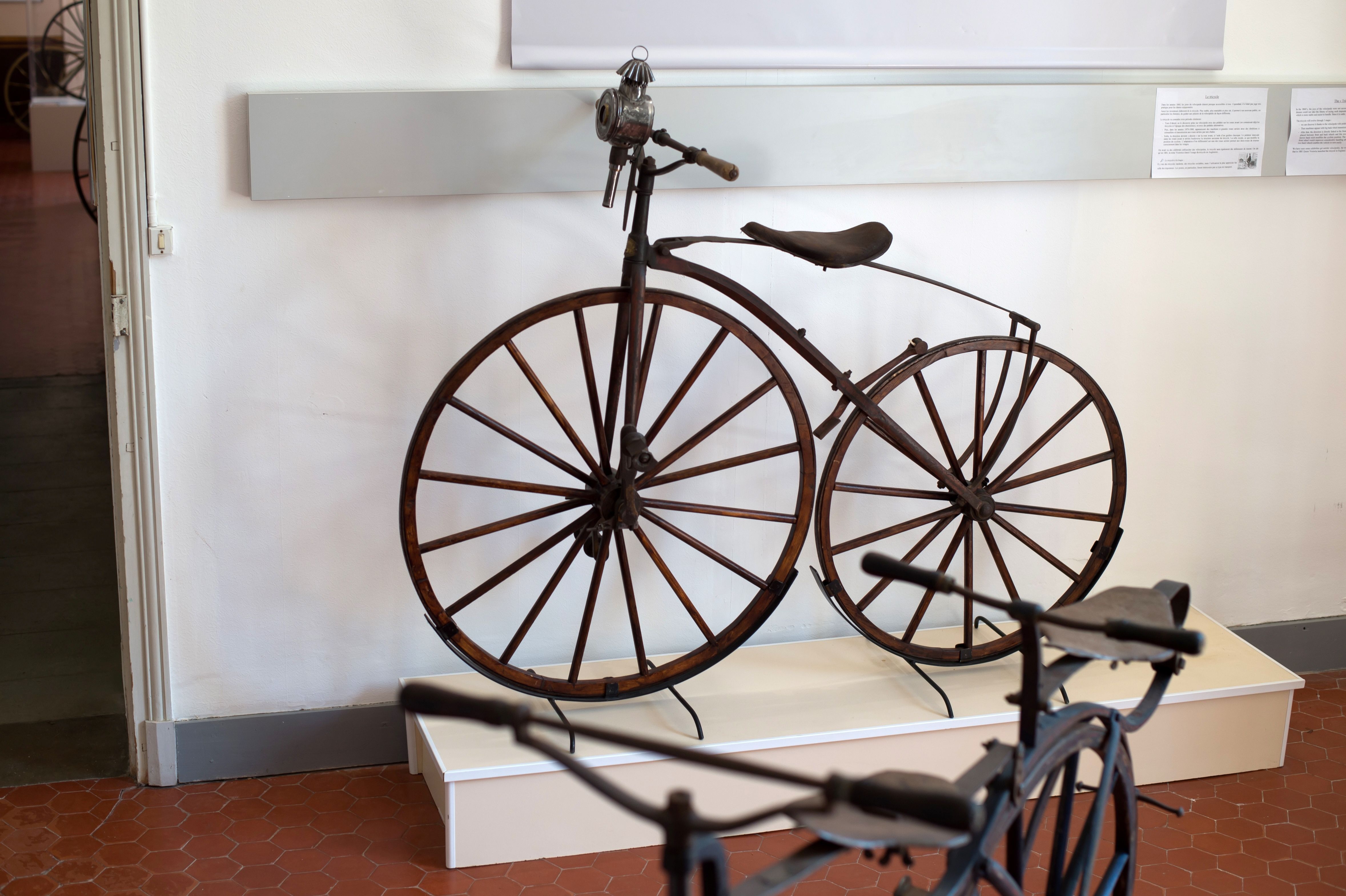 According iBike.org, what Drais invented would have been made entirely of wood, which we imagine would have lead to a bumpy ride. These hobby horse bikes lost popularity after only a few years, since they were deemed dangerous to pedestrians on sidewalks, and frankly didn’t hold a candle to a real horse for efficiency.

Most experts agree that the real start of the modern-day bike came around 1860 with the invention of “the bone shaker.” The inventor of the bone shaker is up for debate, since early claims included German Karl Kech and Frenchman Pierre Lallement (or possibly his boss, Pierre Michaux, according to the Smithsonian)—though Lallement eventually secured the American patent, according to LiveScience. This early velocipede was wildly difficult to ride, and over cobbled roads, was literally bone-shaking. It looks similar to a child’s depiction of a modern bike, with two wheels, a saddle, and pedals, and made with more modern materials. But if you put a person on it, you’d quickly notice how different it was from a modern bike: Riders needed to keep their legs almost straight out in front of them in order to pedal, since the pedals connected directly to the front wheel (via iBike.org).

These bikes had moments of popularity, especially in college towns in the United States, but as the Smithsonian notes, they were so burly and hard to manoeuvre, their popularity died out. But better bicycles were coming soon, and in 1869, the term “bicycle” was coined.

By 1870, in order to get more speed for each pedal stroke, high-wheels, or penny farthings, were invented. The term penny-farthing was used because a penny was a much larger coin than a farthing, and a high wheel bike featured one large wheel in the front with a small one in the back. While these bikes didn’t yet have gears or a bike chain, they did have pedals that propelled the front wheel forward—and were made with more metal so they were less bulky and more sturdy. They also debuted newfangled technology: Rubber tires. And these high-wheel bikes became the some of the first bikes to be raced at tracks and velodromes around the world, though some intrepid racers had already been touring around with velocipedes (via LiveScience). 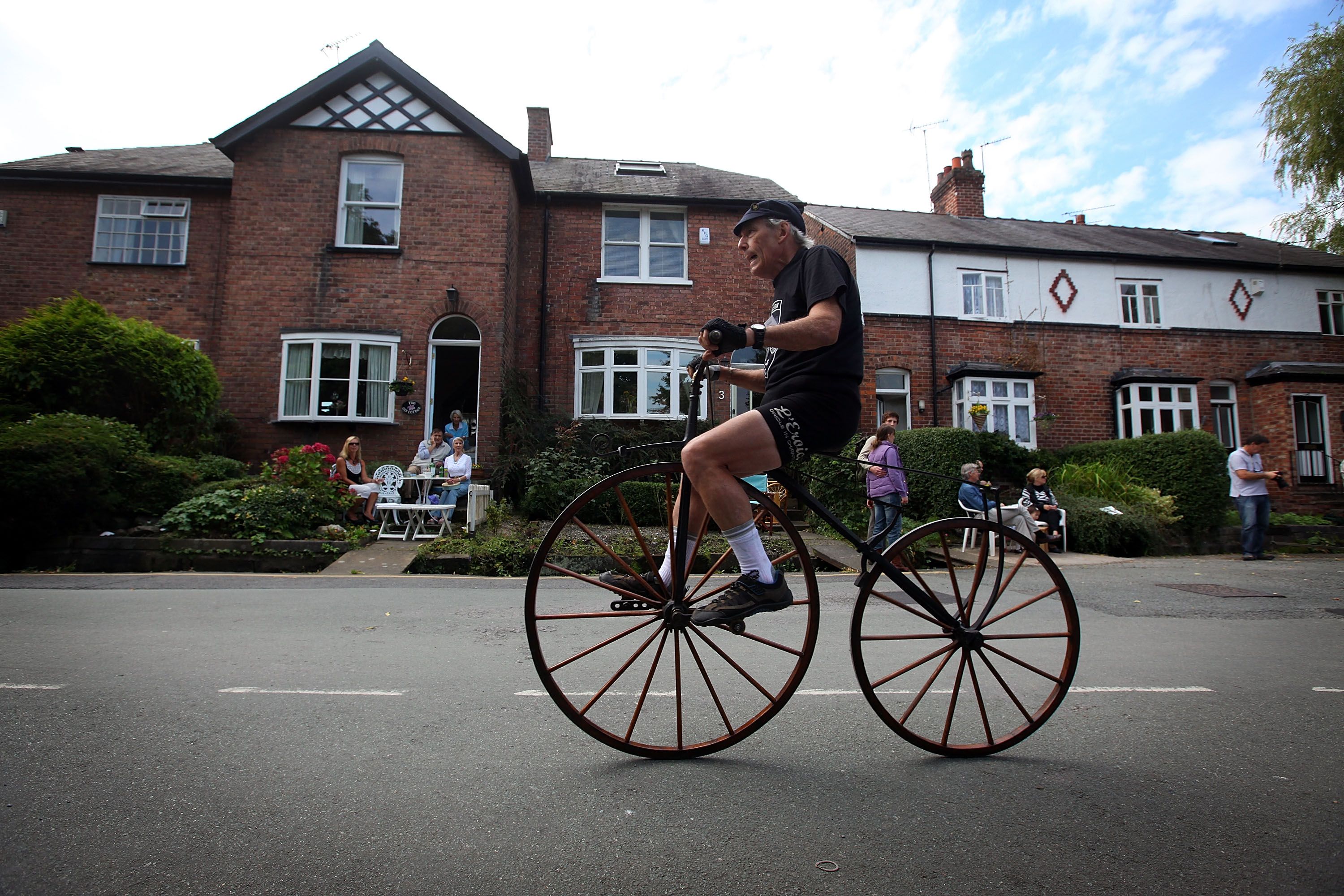 And then came the safety bike, arguably the actual great-great-grandfather of the bikes we ride today. In the late 1870s, three English inventors debuted these bikes, which would revolutionise bikes as people knew them by making them safer (hence the name) and more accessible (high wheels were incredibly difficult to ride for anyone, and almost impossible for a woman to ride ‘appropriately’). These bikes had the first real drive trains, and two same-sized wheels. This invention was aided by many other inventions though: Ibike.org points out that the 1872 invention of a machine to mass-produce ball bearings, the 1876 reveal of the first caliper brake, and the 1878 invention of the first front hub with changeable gears. But it’s unclear who deserves credit for putting out the first geared bicycle: Livescience.com credits John Kemp Starley, while Ibike.org divides credit between Henry Lawson for his bicycle with a rear wheel-based hub and derailleur, and Thomas Humber, who adapted the block chain to produce a bike range.

Meanwhile, in the U.S., bicycle-based FKTs—fastest known times—became a thing around this time as well. Thomas Stevens became the first man to cross the U.S. by bike, and then continued his adventure by going around the world on two wheels: The original bikepacker got started in 1884. By 1894, Annie Londonderry became the first woman to do so. And in the 1890s, it’s been postulated that the bicycle is in large part responsible for “killing the corset” as more women took to the streets (via Ibike.org).

In 1888, the bicycle got a major upgrade with the advent of pneumatic rubber tires—something that seems simple, but would have shed pounds from bikes and made them much more comfortable to ride. Less bone-shaking, more grace on cobblestones.

By the 1890s, companies had started mass producing bicycles on a much larger scale. Schwinn & Company and the American Bicycle Company were both founded at this time, but other unlikely manufacturers also entered the market, including the Wright Brothers. By the end of the century, more than a million bikes were in use in the U.S. (via the Smithsonian).

While this original bicycle boom did eventually hit a decline in the early 20th century as automobiles became more popular, the cycling industry owes a huge debt to the men and women who helped shape the bicycle into what it is today, going from a weird scooter with wooden wheels to a bike that liberated an entire gender and opened up new ways for people to be entertained, get outside, and travel between cities and states.