Peter Sagan Is a Racer Who Continues to Defy Every Expectation

Since the start of his insanely competitive career, the three-time World Champion has defied expectations.

Since the start of his insanely competitive career, the three-time World Champion has defied expectations. – By Joe Lindsey 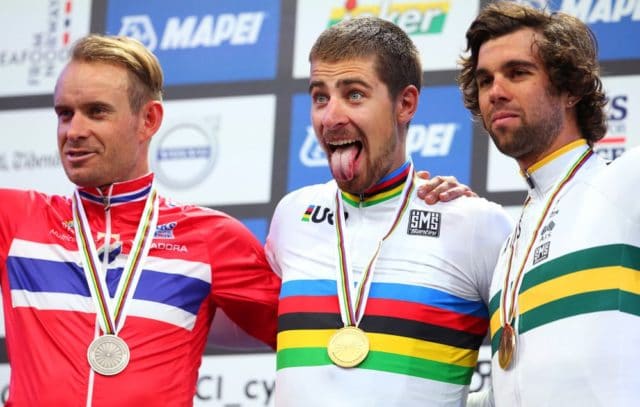 Was this the most nonchalant World Champion in history?After winning his record-breaking third straight rainbow jersey in Bergen, Norway, on Sunday, Peter Sagan celebrated by sticking out his tongue. The gesture fit perfectly for pro cycling’s most iconoclastic rider, a man who doesn’t care about racing with hairy legs and who reshoots scenes from Grease for bizarre ad campaigns.It’s also a perfect fit for a man who seems to confound our expectations to the point that we should, honestly, just stop expecting anything from the 27-year-old Slovak. But we seem to have a hard time doing that.

For example, journalists love to interrogate Sagan about preparation and strategy. He often replies with clipped answers that express a kind of bewilderment at the questions themselves.

Had he previewed the course as other riders do? No, he replied, and he didn’t intend to. “We have to do the lap 11 times or 12,” he said. “That’s a lot of time to see it.” What would his strategy be? “I don’t think about different race scenarios,” he said. “You can see just in the last lap or the last two laps what’s going to happen.”

His answers lacked the koan-like quality of his most memorable expressions, like this nugget from last year’s Tour de France: “Tour is Tour… yesterday was long day because it was like was.” But the key difference between Sagan’s non-answers and those of other sports stars (“I’m just taking it one game at a time,” etc.) is not only that they’re not cliché; it’s that they’re genuine. Sagan wasn’t hiding a true strategy behind his line about waiting for the last laps. That really was his strategy.

Without a strong team to dictate tactics, Sagan spent much of the World Championship race surfing the back of the main group, even as riders like Tim Wellens and newly minted World Time Trial champion Tom Dumoulin went off the front. He played it cool when Julian Alaphilippe and Gianni Moscon attacked with just 15 kilometers to go, made one tentative move of his own, and then cagily sat himself on Alexander Kristoff’s wheel for the sprint.

Kristoff, a Norwegian sprinter on something of a down year, was obviously motivated to pull off a storybook win on home territory. But he made the perfect springboard for Sagan’s final kick, which ended with a photo finish.

Afterward, Sagan mused that his win wasn’t purely a matter of tactics, even if they were invented on the go. “You need luck,” he admitted. “It’s a lottery. It could have happened or maybe not.”

If Worlds is a lottery, then you could do far worse than to bet on Sagan. No male racer has ever won three world titles in a row. (French racer Jeannie Longo won three straight between 1985 and 1987.) Bergen was also Sagan’s 101st professional win—a remarkable career for any rider in its own right. Consider Alejandro Valverde, at 37 years old one of the most accomplished racers in the sport, with 92 victories. Sagan is a decade younger and already has nearly 10 more wins.

Sagan’s career, like the man himself, has largely defied expectation. Is he a sprinter? He’s won eight stages of the Tour de France and five green jerseys, so yes. Is he a classics specialist? Of course: He’s won monuments like the Tour of Flanders and prestigious cobbled races like Gent-Wevelgem. In general, he’s been almost unstoppable since his 2010 rookie season, when he first surprised the pro peloton by winning two tough stages of Paris-Nice.

He can climb, too. At the 2015 Tour of California, he was widely expected to lose the race lead on the tough penultimate stage, a summit finish on Mount Baldy. And he did, but only by two seconds, which he got back in time bonuses to win the overall.

RELATED: Peter Sagan Is Going to Be a Dad

There are things Sagan hasn’t done. He has yet to win Milan-San Remo, for example. But there is little he cannot do. At last year’s Tour de France, he finished in the top 10 on 10 of the 21 stages. The previous year, he placed top five in 11 stages. Maybe he won’t ever win the Tour de France, but if he decided to try, how many of us would think twice before betting against him?

Through it all, we in the media have treated Sagan as if he were somehow similar to other racers. But he very much is not. Sagan confirmed that he will not race again this season. His wife is roughly eight months pregnant. Although a reigning world champion commands hefty appearance fees at late-season races, Sagan says he wants to stay at home for the birth of his first child.

And so, perhaps inevitably, came the suggestion that a third world title and impending fatherhood might change Sagan’s priorities—might make him less hungry for racing success. Think, for a moment, about the absurdity here.

Sagan is already one of the richest racers in the sport’s history, with an annual team contract reported to be in the €4 million to €6 million range, which doesn’t even include separate endorsement deals. Not his wealth, his previous two world titles, his marriage, team changes, nor any other life event, has dimmed his competitiveness.

At some point, Sagan will lose his hunger. But does anyone really think he’d keep racing at that point? That Peter freakin’ Sagan would line up just to cash a paycheck? Behind the Dude-Abides attitude and the whatever, man approach to strategy, Sagan is a cagey and carnivorous racer. Maybe we should stop expecting him to be someone else and just enjoy him while he’s here.