The Tao of the TT: Geoghegan Hart pips Hindley to win the Giro d’Italia

The 25-year-old Team Ineos rider had been neck-and-neck with Hindley going into the 21st and final stage, setting up an unprecedented finale.

But it was the Londoner who lifted the 103rd edition of the ‘Never ending trophy’ thanks to his 13th position in the 15.7km time-trial with Sunweb’s Hindley slipping to 38th.

Geoghegan Hart’s Italian teammate Filippo Ganna was first in the race against the clock, a seventh stage win for Ineos, who lost team leader Geraint Thomas to a broken pelvis after just three stages.

“It’s been a great fight. Right up until I reached Milan, I didn’t think I was going to win the Giro d’Italia. It’s crazy!” said Geoghegan Hart, the first rider to ever pull on his first pink jersey at the finish line.

“It’s going to take a long time to sink in. Until the moment I crossed the line, I tried to take it like any other stage or any Sunday ride.

“It was just about performing and seeing my family and friends at the finish.

“I haven’t been home since last year, and I’m looking forward to seeing my siblings.

“It’ll be strange to leave the team bubble.”

It was the first podium on a Grand Tour for the English rider, but also for second-place Hindley and Dutchman Wilco Kelderman, both of Sunweb.

Geoghegan Hart had won Saturday’s 20th stage, edging Hindley, who wore the pink jersey on the final day thanks to 0.86-second difference over his rival in the two previous time-trials.

But the suspense was short-lived as Hindley dropped 22 seconds on his rival at the intermediary point 10.3km into the stage from Cernusco sul Naviglio, in the north-east of the city.

“I did everything I could,” said the 24-year-old who nevertheless becomes the first Australian on the Giro podium.

“I laid it all out there on the road. There was nothing I could do. I was going as hard as I could.

“Hopefully this is just the beginning. This is for sure my best performance ever and hopefully it’s a step in the right direction for things to come.” 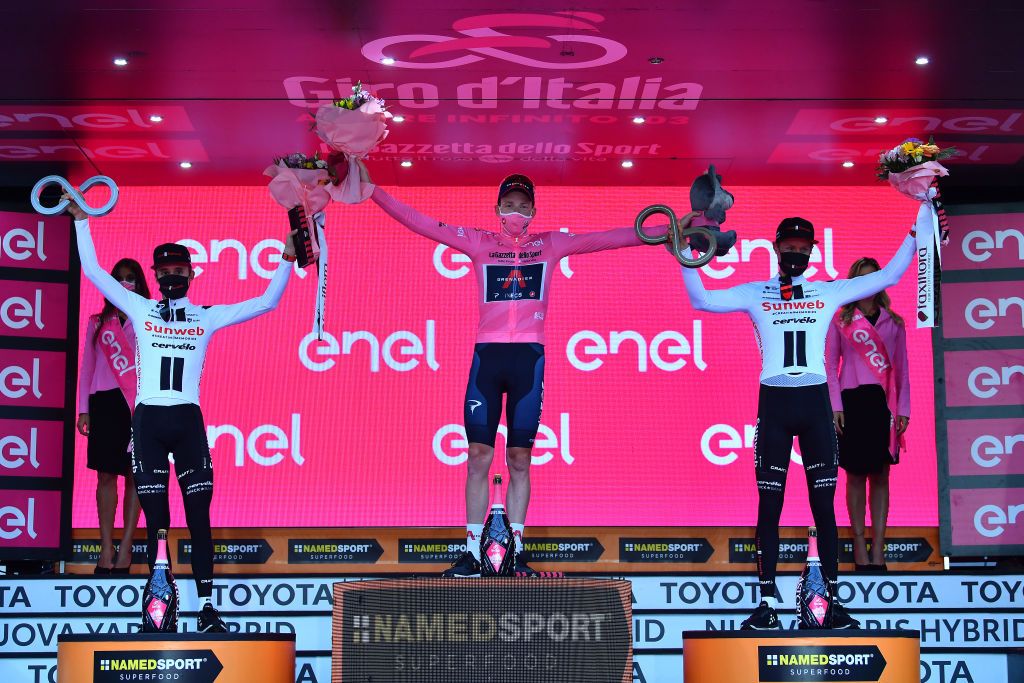 Geogeghan Hart is the second British winner after Chris Froome pulled off an incredible comeback two days from the finish in 2018.

Ganna set a blistering pace of 54.5km/h to finish 32 seconds ahead of Belgian Victor Campenaerts and Australian teammate Rohan Dennis in the final stage.

“I have won this ITT but I am even happier for my teammate Tao, it’s fantastic,” said the Italian world champion who won all three time-trials in this year’s race.

Neither Geoghegan Hart nor Hindley rider had been their team leader when the race got underway in Sicily three weeks ago.

Since his professional debut in 2017 with Sky, which have since become Ineos, Geoghegan Hart had won just two stages, on the Tour des Alpes in 2019.

The victory was a boost for his team who had a disappointing Tour de France with defending champion Egan Bernal’s withdrawal, while Ecuadorian Richard Carapaz did not defend his Giro title, but is competing in the Vuelta a Espana instead.

Kelderman finished third—one minute and 29 seconds behind the winner with Portugal’s Joao Almeida who had held the pink jersey for two weeks until three days from the finish, in fourth.

None of the pre-race favorites were on the podium with Simon Yates and Steven Kruijswijk both ruled out with COVID-19 and Thomas injured.

“There is a change of generation, that’s clear,” sighed Nibali, who had finished on the podium six times.

The race managed to go all the way despite an upsurge in coronavirus cases in Italy.

Mitchelton and Jumbo-Visma withdrew because of positive coronavirus tests.

But stringent health measures had allowed the race to finish, including the absence of spectators at the finish line.