Stage 17: A Day Of Reckoning On The Col de la Loze

ONE OF THE HIGHEST PAVED ROADS IN FRANCE, THE COL DE LA LOZE’S 2,304 METERS IS EASILY THE HIGHEST IN THE ENTIRE 2020 TOUR.

Stage 17 is the hardest of the final week—and maybe the entire Tour—with two “Beyond Category” climbs, including a summit finish on the Col de la Loze, one of the highest paved roads in France and definitely the highest climb in the 2020 Tour de France. 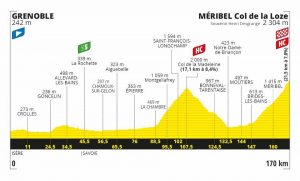 The stage begins in Grenoble and heads northeast along the valley toward the Intermediate Sprint in La Rochette, where BORA-Hansgrohe’s Peter Sagan will do his best to earn more points in an effort to tear the green jersey away from Quick-Step’s Sam Bennett—even if it means going on the attack to do it.

The race then loops south—still in the valley—to the base of the Col de la Madeleine (17.1km at 8.4 percent). The Madeleine is long and steep, and after two-and-half weeks of racing, it’s going to hurt. Jumbo-Visma will likely ride tempo up the Madeleine, doing their best to weaken the competition, hopefully isolating a rider or two well before the final climb. A select peloton should emerge by the top.

A long descent brings the riders back down into the valley, followed by a false flat to the base of the Col de la Loze (21.5km at 7.8%) which looms above the Méribel ski resort. The Tour famously visited Méribel in 1973, when Frenchman Bernard Thevenet won the stage but was unable to gain significant time on Spain’s Luis Ocaña, who went on to win the Tour.

The race hasn’t been back since, but the construction of a new cyclists-only roadway from the resort to the summit of the nearby Col de la Loze has given the organizers a good reason to return. The new roadway adds another 7km to the climb, much of which is steeper than 10 percent—with one pitch topping-out at 20 percent! One of the highest paved roads in France, the Col’s 2,304 meters is easily the highest in the entire 2020 Tour.

This stage is as straightforward as it is difficult: it all comes down to the Col de la Loze, particularly the new, additional 7km to the summit. Jumbo-Visma’s Primož Roglič could have his hands full defending the jersey against the likes of UAE’s Tadej Pogačar and Astana’s Miguel Ángel López, who both looked frisky at the end of Stage 16. Roglič has an advantage of 1:45 over López, a fairly sizable lead this late in the Tour. But Pogačar sits only 40 seconds behind his compatriot and appears ready to pounce. When it’s all said and done, the winner of Stage 17 could very well go on to win the Tour.

Arkéa–Samsic’s Nairo Quintana  lost more time on Stage 16, which means he’s either really struggling—or he’s saving himself for Stage 17. He has the talent to hang with the GC leaders up the final climb and is now far enough down on the General Classification to not get chased if they attack. Otherwise, this stage will go to one of the Tour’s podium contenders, of which Pogačar and López both look to be the best at the moment. 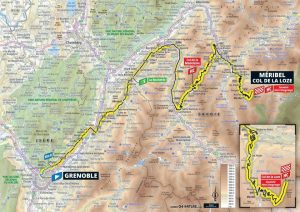