On paper, Stage 7 of the Tour de France is straightforward, but some late afternoon wind could make a bit of hard work for our pick, Sam Bennett, and his Quickstep team.

After a hard opening week, the pack will welcome this relatively short and—on paper—straightforward stage that leads the Tour de France out of the rugged Massif Central and toward (gulp) the Pyrenees. 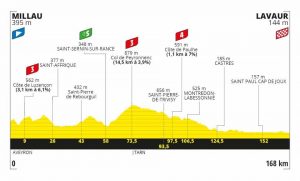 At “just” 168km it’s not long by Tour standards, and not especially difficult either. A Category 3 climb right out of the start in Millau should spring the day’s early breakaway, and the first half of the course suits an escape, with a lumpy, up-and-down profile. The primary difficulty is the Col de Peyronnenc, a long (14.5km), but not particularly difficult (3.9 percent average gradient) climb; its summit comes roughly halfway into the stage.

From there, it’s gently downhill for almost 50km to Castres, followed by 40km of flat to the finish in Lavaur. That’s a perfect scenario for the sprinters. Even if some of them struggle with the climb (unlikely, but always possible), they’ll have plenty of time to catch back on and set up for the sprint. The weather forecast is hot and sunny, and while winds are expected to increase in the afternoon to around 20-30km/h, they should come mostly from a cross-tail direction, which would not produce the splits in the pack that we saw briefly on Stage 5. The pack will have to be attentive to the gap to the breakaway, as tailwinds can make it easier for a small group to stay away. But we’d still expect a straightforward sprint finish. 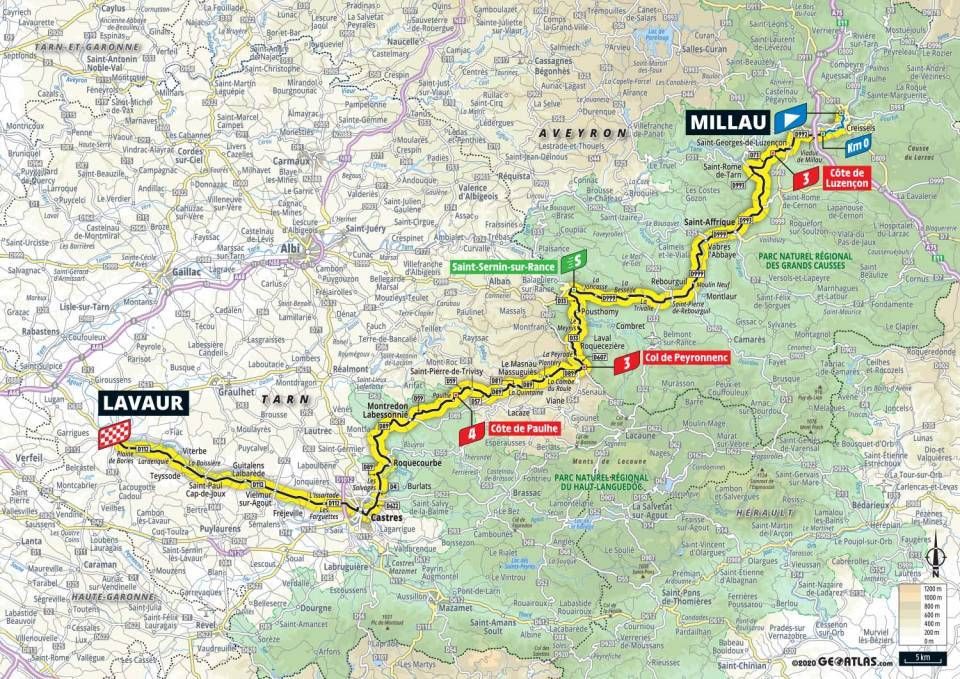 The final run into Lavaur is fairly straightforward, with one notable exception: just outside the red kite signaling 1km to go, the race route narrows as it passes a roundabout on only the right side. Riders will cover that pinch point in their morning briefing, and will know that positioning in those final few kilometers is even more important than normal. So expect to see a higher-than-usual amount of elbow banging as teams fight to get their sprinters up front, which heightens the risk of crashes.

Deceuninck-Quick Step’s Sam Bennett took the green jersey off Peter Sagan’s shoulders on Stage 5, and could be one of the few threats to Sagan’s long dominance in the competition. He’s primed for a stage win. Stage 3 winner Caleb Ewan (Lotto-Soudal) showed that his finishing kick is unparalleled right now, even without a clean line to the finish. And Cees Bol just missed out on Stage 5. His Sunweb team had the best-organised leadout, but timed it just a bit too soon. If they get it stage 7, watch out. For such a straightforward stage, there are plenty of potential winners, but we have to choose one: Sam Bennet to win in Irish Green.