So far, we are 2-for-0 in the prediction game. Can Sam Bennett rescue us on this fast run-in?

Let’s get predicting: Sam Bennett for Monday’s Stage 3, which starts in Nice and takes the peloton on a 198km ride to the foot of the Alps where an early summit finish awaits the riders at the end of the Stage 4. 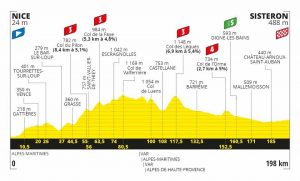 With three Category 3 climbs and one Category 4 climb throughout the day, we are predicting there will be plenty of riders looking to go on the attack, including a rider or two from AG2R in the hopes of defending Benoit Cosnefroy’s King of the Mountains jersey. The Frenchman is tied with his compatriot, Anthony Perez of Cofidis, so this battle should prove to be the central storyline of the first half of the stage. An uncategorised climb in the first 10km should give them the perfect opportunity to escape.

Then it’s up to the sprinters’ teams hoping to take advantage of one of few chances they’ve been presented with during the Tour’s first week. With the exception of the Category 4 Col de l’Orme 45.5km from the finish line, the final 80km are generally downhill, which should give teams like Quick-Step, BORA-Hansgrohe, and Lotto-Soudal plenty of road to make the catch and set-up their lead-outs.

The run-in to the finish line is straight, with no corners but a few pieces of road furniture—including a roundabout just before 2km to go. Crashes are still a strong possibility as the peloton will be large and everyone is nervous. The weather is expected to be sunny, with temperatures in the 20s and a headwind as the race approaches Sisteron.

Assuming he stays upright, which is easier said than done so far in this year’s Tour, Sam Bennett’s Quick-Step team mate Julian Alaphilippe should have little trouble defending his yellow jersey. Stage 4’s summit finish should give us an indication as to how long he intends to try and keep it.

Stage 3 should be a day for the sprinters with Quick-Step’s Sam Bennett, BORA-Hansgrohe’s Peter Sagan, NTT’s Giacomo Nizzolo and Lotto-Soudal’s Caleb Ewan the best bets for the win. And don’t discount Stage 1 winner Alexander Kristoff of UAE or Elia Viviani of Cofidis. We backed him on day one, so we are again predicting Bennet for the win, again. 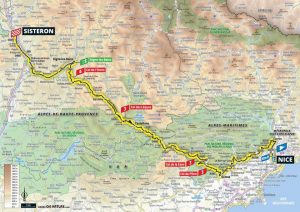