As we enter the second sector of the 2020 Tour, what have we learned from its first 9 stages?

It’s been a strange Tour de France so far on all levels, and predictions are perilous, so let’s focus on what we’ve learned from the opening nine stages of the race and how that might (or might not) affect the second half:

What COVID? Oh, THAT COVID…

Everyone was on edge in Nice at the start, wondering whether riders, entire teams, or the whole race would get shut down by positive tests as Nice itself was declared a Red Zone with a worrying rise in cases. So far, so good. But that may only be because, after the initial round of testing to enter the race “bubble,” there haven’t been any tests.

That changes Monday with the rest-day tests. Publicly, team staff say that they’re staying safe, but rumors are that younger staff are, shall we say, a bit less vigilant about their behavior. And fan presence on some climbs, like Stage 8’s Peyresourde, is not far off normal years. Fans—densely packed, sometimes maskless—ran alongside the riders while yelling at them from just a few feet away, and the riders weren’t shy afterward about voicing their concern and displeasure. The Tour may further restrict fan access, but Stage 9 still saw large numbers of fans high up on climbs even in the mist and rain. Let’s hope Monday’s new round of testing doesn’t ignite an explosion of cases, but teams are again nervous and perhaps rightly so.

One French Hope Fades; Two Rise to Take His Place 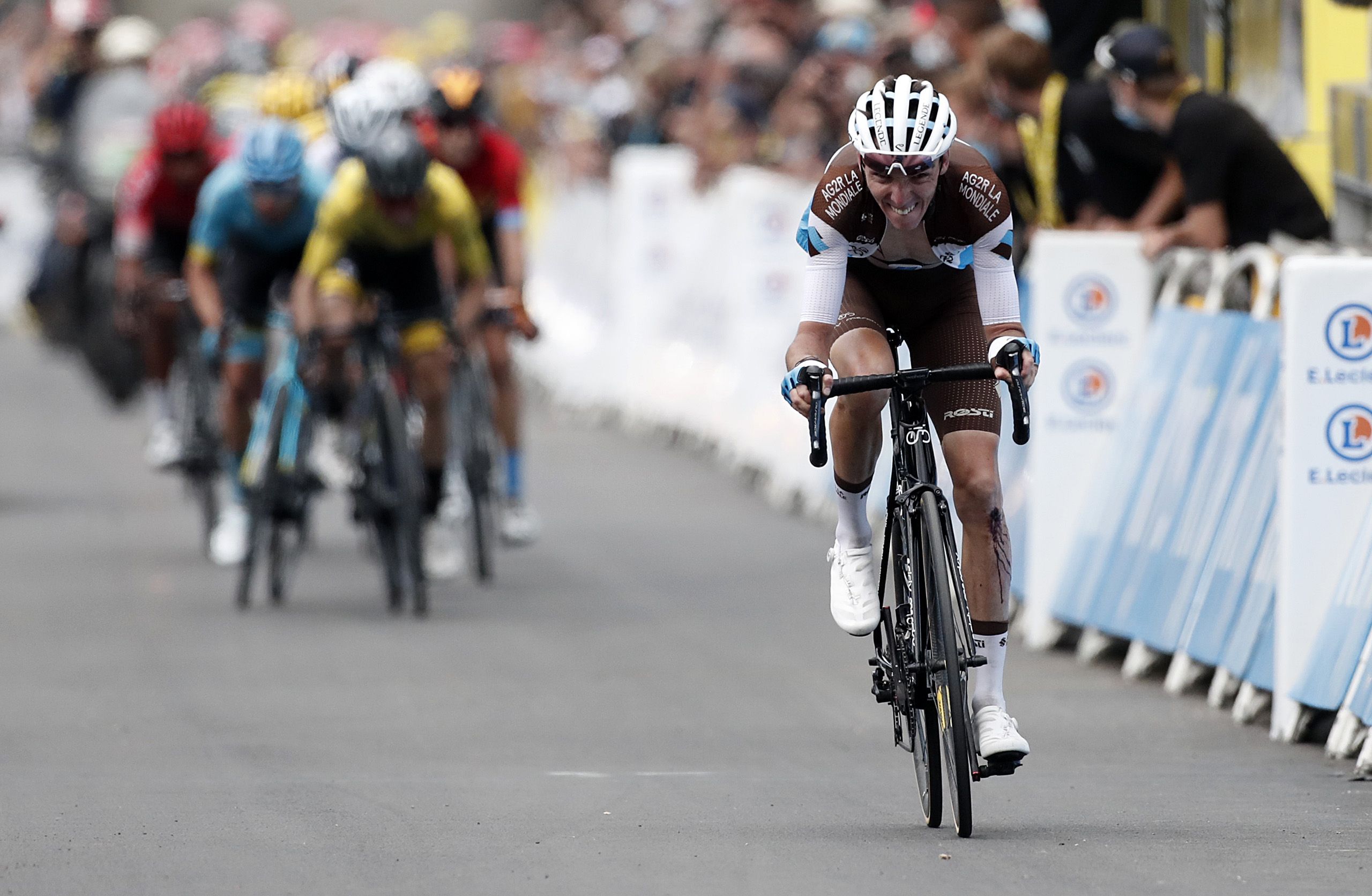 You’ve got to feel for Groupama-FDJ’s Thibaut Pinot, perennial French hope for the yellow jersey. In the past, his ambitions have been snakebit by crashes and descending yips; then last year’s freak, late-race knee injury. This year, we learned that lower-back pain (possibly from his Stage 1 crash) prevented him from riding to his abilities on Stage 8, and he lost tons of time. In his stead, Romain Bardet (Ag2r la Mondiale) has surged back into the conversation: aggressive on Stage 8 and in fourth overall despite saying prerace that he was targeting stages. But, as Yoda said, “There is another.”

READ MORE Is Your afternoon Nap Hurting You?

Cofidis’s Guillaume Martin is two years younger (27) than Bardet, has a master’s degree in philosophy, and has long been overlooked, even by the French. (He was originally supposed to turn pro on Pinot’s FDJ team in 2016, but they didn’t have a roster spot for him. Whoops.) Martin is accustomed to riding without a lot of support, and sits third overall right now. The deeper he goes, the more attention he’ll get.

Jumbo Is the Deepest Team, but Watch the Top Tandem From INEOS

For years, INEOS Grenadiers (formerly Sky) dominated the Tour on climbs with its signature tactic: using multiple riders in successive pulls at the front to ratchet up the pace so high that it burns off anyone with less-than-stellar form, and discourages attacks. This year, that role has been usurped by Jumbo-Visma as INEOS doesn’t seem to have the necessary depth. But, late on Stage 8, Jumbo’s pressure seemed to backfire.

Team leader Primoz Roglič had already lost climbers Sepp Kuss and George Bennet, when the lead group blew up under pressure from UAE-Emirates’s Tadej Pogačar. Roglič was able to follow almost all moves, but Tom Dumoulin was dropped. Meanwhile, INEOS’s defending champion, Egan Bernal, still had Richard Carapaz for company. That dynamic may change in the days to come (Jumbo rode strongly on Stage 9), but it may make Jumbo a bit less aggressive about when and where to deploy their team strength. 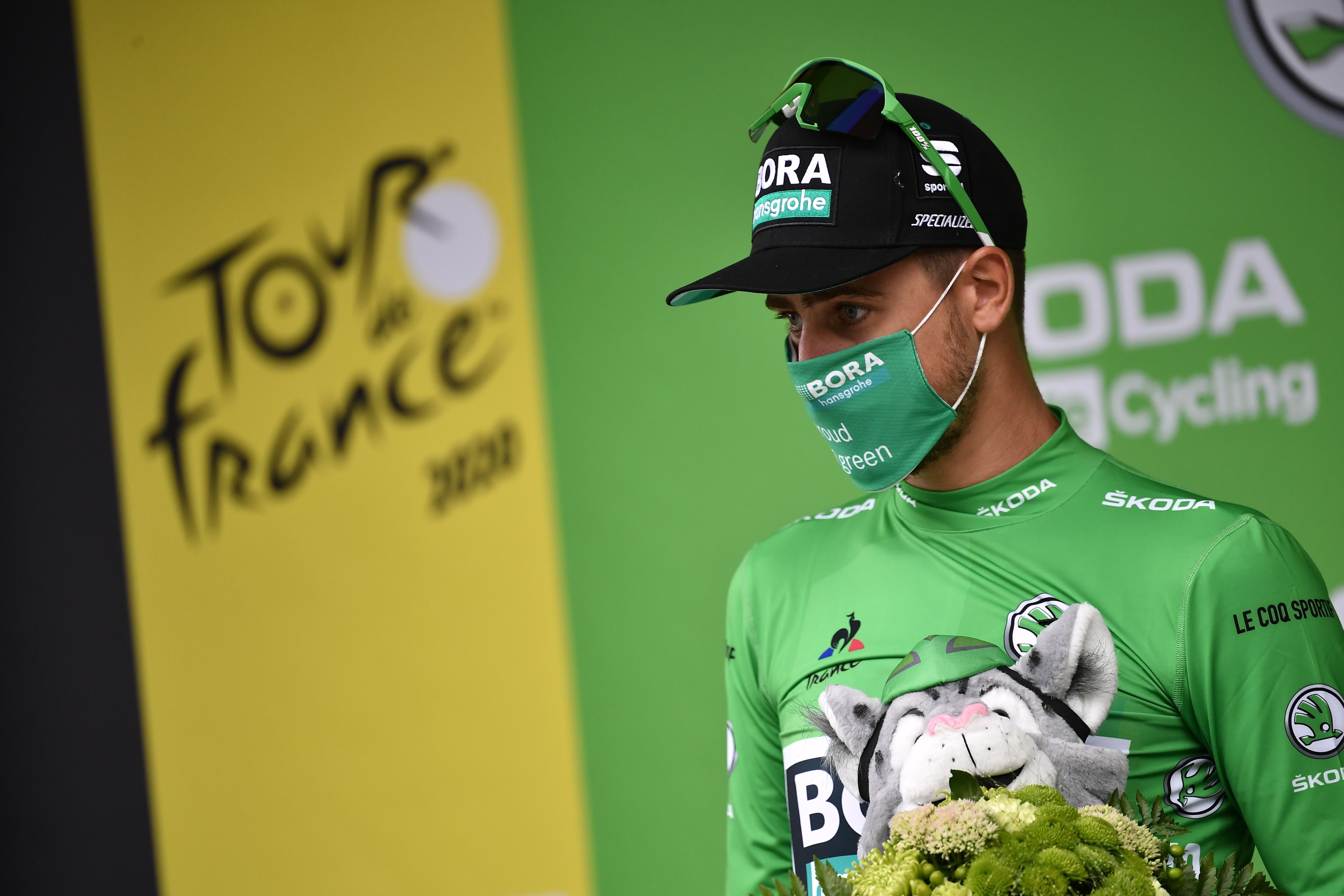 Tour organizers constantly fiddle with the format of the two secondary jersey competitions that are points-based to try to liven them up. For most of the past decade, none of the tweaks has mattered for sprinters’ standings, as Peter Sagan (Bora-Hansgrohe) has spent more than 125 days in the green jersey and may get his eighth win despite not winning a stage yet – he really has learned how to make the most of the intermediate sprints. Even double-stage winner Wout van Aert of Jumbo-Visma is only in third place in the competition. But for all Sagan’s success at the Tour and elsewhere, he’s surprisingly light on Tour stage wins, with 12 in eight full entries (he was DQ’d early in the 2017 edition).

Sagan can pick off intermediate sprints to defend his position, but his not-so-secret weapon is consistently high stage finishes: he’s been 13th or better in four of the opening nine stages so far, even though there have been four mountain stages. Last year, he was top 10 on fully half the stages total, and in 2018, he didn’t finish lower than eighth until Stage 10 (he also notched two stage wins in that spread). Van Aert is the only rider today with similar tactical and physical capabilities to win on different kinds of courses, but as long as he’s in a support role to Roglič, Sagan’s green is safe.

Nobody Knows How Good They Really Are

Usually by the start of the Tour in July, even team leaders who get to pick their calendars have 20-30 race days, sprinkled throughout the four to five months leading to the race and broken up by long training blocks to build form. Other riders can have 40 race days or more by July 1 if they’re injury-free. But the COVID-induced delay was essentially a second offseason, and it was longer than the normal winter break. Since the restart, most riders got maybe 10 or so race days before the start of the Tour.

No one has raced longer than five days in a row since March. They’re already at almost double that now. As a result, none of the top riders really has an idea of how their form will hold over the second half of the race. So far we have learned Roglič looked snappy and attentive to attacks in the Pyrenees, but is he peaking too soon? Which riders are still building some fitness and will peak for the Alps? (I’ve got my learned eye on Bernal and EF Pro Cycling’s Rigoberto Urán.) And which other riders will see their GC aspirations follow the path of Pinot’s heartbreak on Stage 8? No one knows. The Tour is in uncharted territory now. 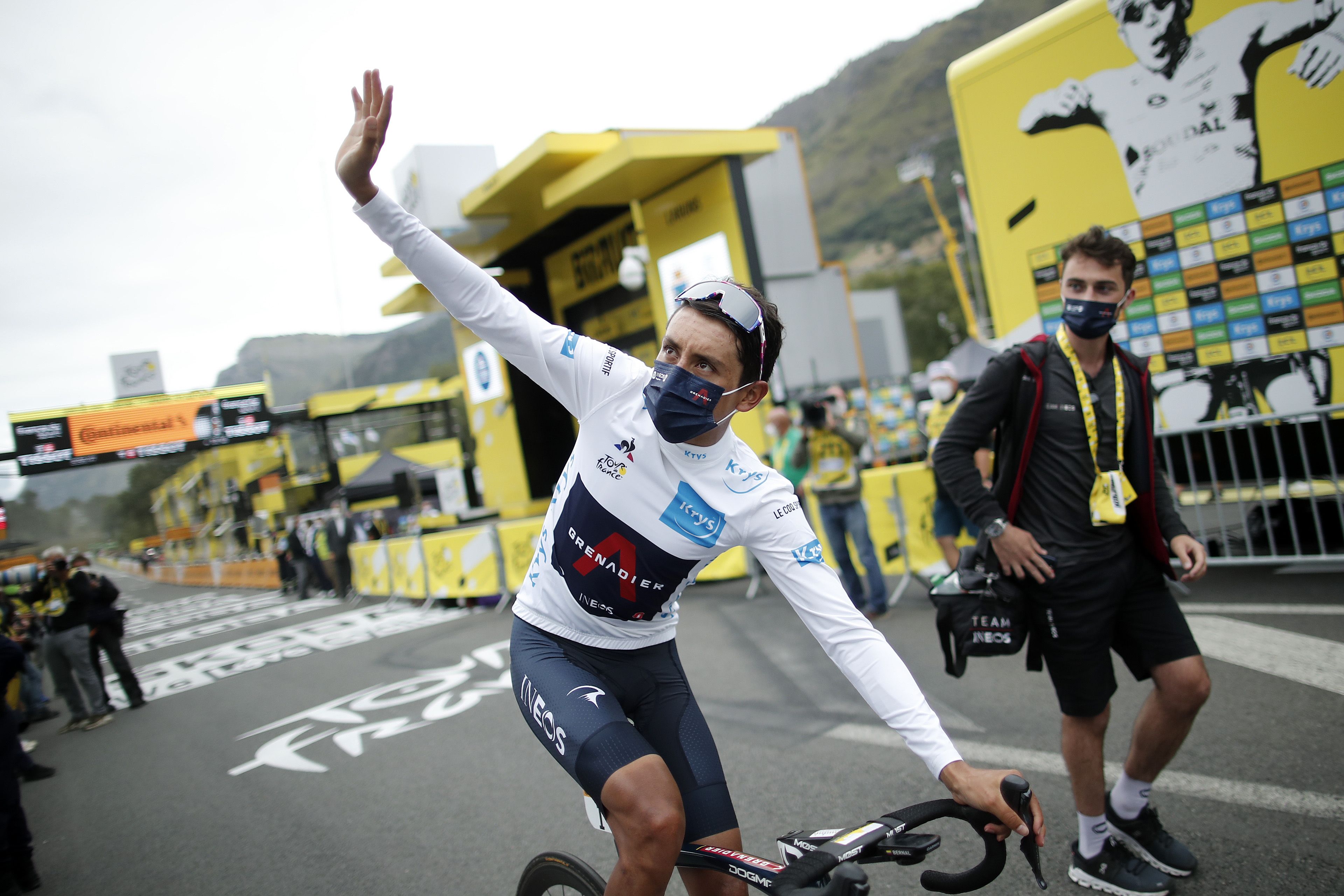 It’s nowhere near a revelation that Colombian riders are all over this year’s Tour; that’s been the case for several years now. But it’s worth noting just how deep the talent pool is. In the GC, spots 2, 5, 6, and 9 are Colombian riders, and span in age from elder statesman Urán (33, in his 15th pro season) to defending champ Bernal, who is 23. There are two other Colombians—Mitchelton-Scott’s Esteban Chaves and EF’s Sergio Higuita—in the top 20. Bernal can still win the Best Young Rider competition for two more seasons (along with maybe yellow).

Nairo Quintana (Arkea-Samsic) looked strong in the Pyrenees. Then there’s Astana’s Harold Tejada, 23 and in his first pro season. He’s been quiet so far riding for teammate and compatriot Miguel Ángel López (9th overall) but is a talented climber. And that’s just seven of the 10 Colombians in the race. There are more on the WorldTour and on the way: the talent pipeline is full.

Speaking of Colombians, Bernal is in the white jersey of best young rider, but he’s got a serious fight on his hands from Stage 9 winner Pogačar. More important, they’re strong contenders for the overall lead. The super Slovenian is just 21 years old and in his second season on the WorldTour, but Pogačar is riding with the hunger of a champ and the caginess of a veteran pro. He already has 13 wins to his credit and was third overall at last year’s Tour of Spain. Bernal, of course, is, well, Egan freakin’ Bernal, defending Tour champ. Respectively, they’re second and seventh overall right now.

Watching these two guys go at each other for the next decade is going to be a major treat for racing fans. And that’s not even taking into account what happens when Remco Evenepoel rejoins the chat next season when he heals from a serious injury (fractured pelvis) suffered last month at the Giro di Lombardia.

Sometimes crosswinds strike the Tour by surprise. But Stage 7 wasn’t one of those days. By the time the riders took the start, it was clear that it would be a stiff, crosswind-y day. So when Bora-Hansgrohe hit the front to drive the pace, it should’ve been expected. The geometry of the peloton says only so many guys can be near the front at once; it’s impossible to expect GC candidates will always make the split. But some guys have a talent for missing out more often than not. I’m looking at you, Richie Porte (Trek-Segafredo) and Mikel Landa (Bahrain-McLaren) – both really should have learned to anticipate the madness by now.

And it’s not like this is a rare occasion. Last year, Porte and Landa both lost 1:40 or more on Stage 10 when Jumbo and Deceuninck-Quick Step split the field. In 2016, an alert Chris Froome jumped on Peter Sagan’s wheel in Stage 11 and got a late-race gap. At the end it was only six seconds, but Froome picked up bonus seconds as well. Crosswinds also split the Tour on Stage 16 in 2017, and in last year’s Vuelta España. An interesting note: two guys who rarely miss the split are Quintana and Urán. They sure learned from early-career mistakes. They don’t bat 1.000, but generally they’re on the right side of the gaps when they open. In any case, it’s likely not the last time crosswinds will play a role this Tour: Tuesday’s 10th Stage is flat, but takes place almost entirely on the exposed Atlantic coast, and the forecast for the finish on Île de Ré is for head and crosswinds at 20-30km/h. You’re on notice, Richie. 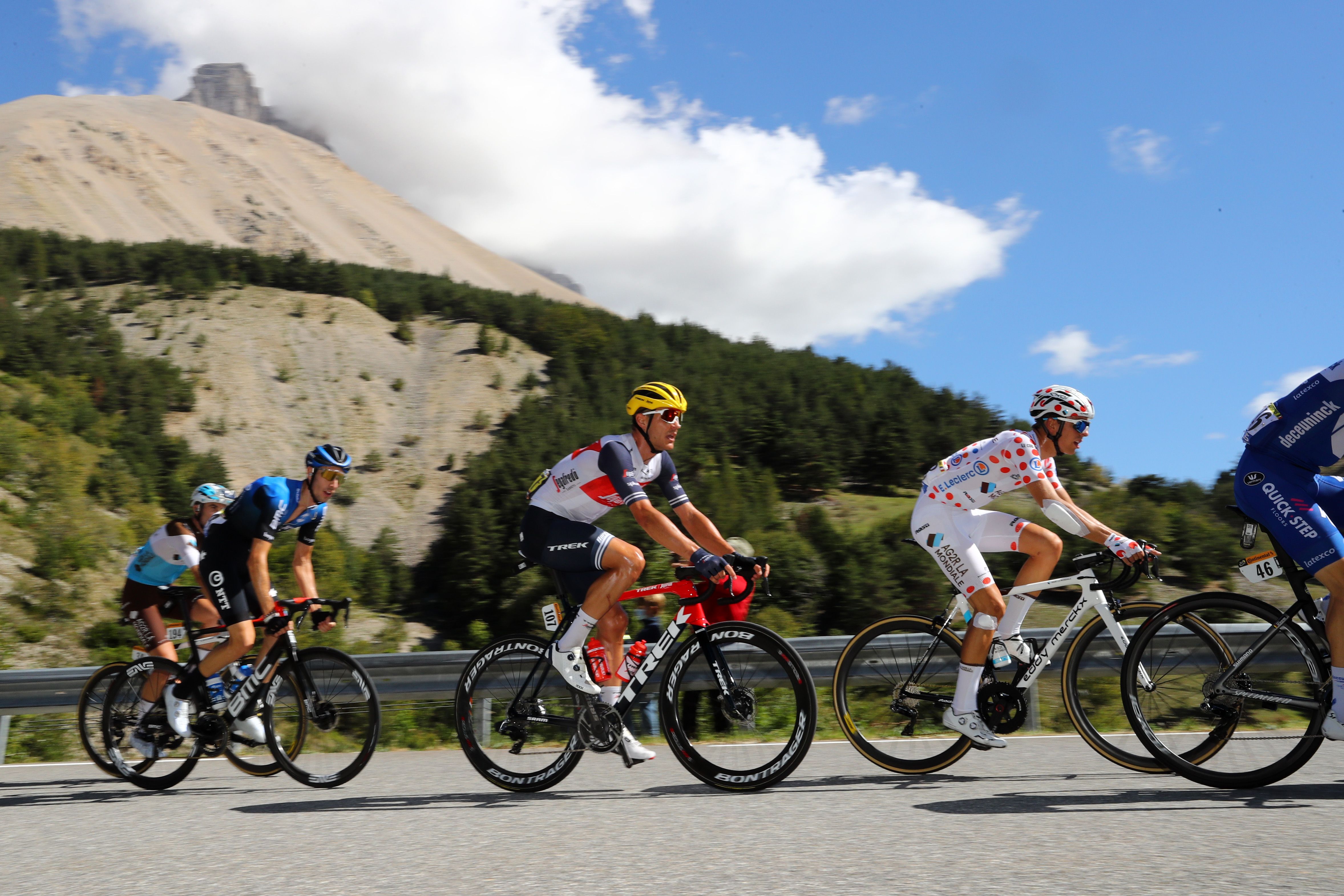 We’re just nine stages in and there have been four yellow jersey wearers so far. But the polka-dot jersey competition for Best Climber has been pretty sleepy. Ag2r la Mondiale has a firm grip on the standings with leader Benoit Cosnefroy, who took the jersey on Stage 2 and hasn’t relinquished it since. He’s followed by teammate Nans Peters, who sucked up a bunch of KoM points on his Stage 8 break. That might change in the Alps as three factors start to emerge.

First, breakaways: Sunweb’s Marc Hirschi jumped from 27th to 3rd in the KoM standings on the back of his Stage 9 breakaway alone. As the race moves to the Alps, expect to see more moves, and more larger breakaways that are harder for a rider like Cosnefroy to control on the climbs. Second, there are four mountaintop finishes from Stages 13-17, with bigger climbs that offer more points, and it’s much harder for a rider to be in the mix for those than it is the more moderate midstage ascents where Cosnefroy has racked up most of his points so far. There are also double points at the summit of Stage 17, the race’s high point atop the Col de la Loze (2 300m high). Finally, the primary tactic to win the KoM jersey has long been to bank a big lead early and then defend. But there are five riders within 15 points of Cosnefroy’s 36-point total. And with so many points still on offer, riders who see their GC hopes fizzle may set their sights on the KoM standings, adding more competition to the mix. The upshot: if we have learned anything from recent years, the Tour’s quietest competition so far will heat up in the second half of the race.

The 2020 Tour de France hit the Pyrenees, and boy did it serve up some racing. It has been a while since we have needed…