Fire Up Your Arms With This Weight-Free Workout

Upper body strength is almost as important as powerful legs when it comes to cycling.

Let’s be real: Cyclists aren’t exactly known for their jacked arms and shoulders, but it’s crucial that we all have upper body strength. No matter how strong your legs are, you can only pedal as far as you can hold yourself up in the saddle.

“Being strong in the upper body allows cyclists to hold a better position on the bike,” says Brian Levine, a USA Triathlon Level I coach and Flywheel cycling instructor. “It means you don’t have to strain and prevents tension from building up in your shoulders and neck.” Plus, solid upper body strength can help make you more aerodynamic when you need to be, he says.

You’re also going to be more energy-efficient on the bike if you strengthen your upper body. Weaknesses in the upper body will lead to poor form, and “poor form results in excess energy expenditure – or more movement in the thoracic spine (upper back) and shoulders – which takes away from the amount of power we can put into the pedal stroke,” Levine explains. 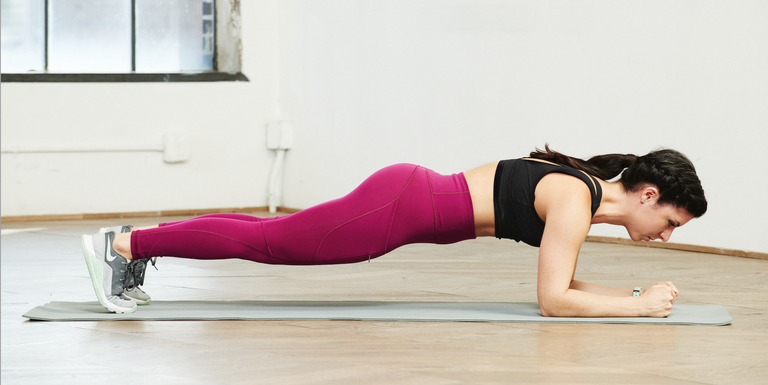 By the way, staying on top of strength training will help you preserve muscle mass all over, which is increasingly important as you get older, and your metabolism slows down. “Keeping up your strength training in addition to cardio helps slow that loss of muscle mass,” he says.

And here’s the kicker, as a cyclist, you don’t necessarily need a ton of weight to increase your upper body strength; your own bodyweight will do just fine, especially if you’re just starting to focus on upper body training. Here, Levine put together an arm workout you can do without weights. This circuit focuses on arms, core, and shoulders, all important areas to focus on for cyclists.

Perform each exercise for 60 seconds, attempting as many reps as possible.

Start in a standing position and extend arms straight overhead. Hinge at the hips to bend forward and place palms on the ground. Walk hands out until you are in a high plank position with wrists under shoulders and core engaged. Reverse direction, walking your hands back to your feet. Return to stand.

Start in a high plank position with hands directly beneath shoulders, and body in a straight line. Bend elbows out to sides and lower chest to floor (or as far as you can). Keep abs tight and body in one line; don’t let your hips dip. Hold for 1 second, then push back up. Repeat. 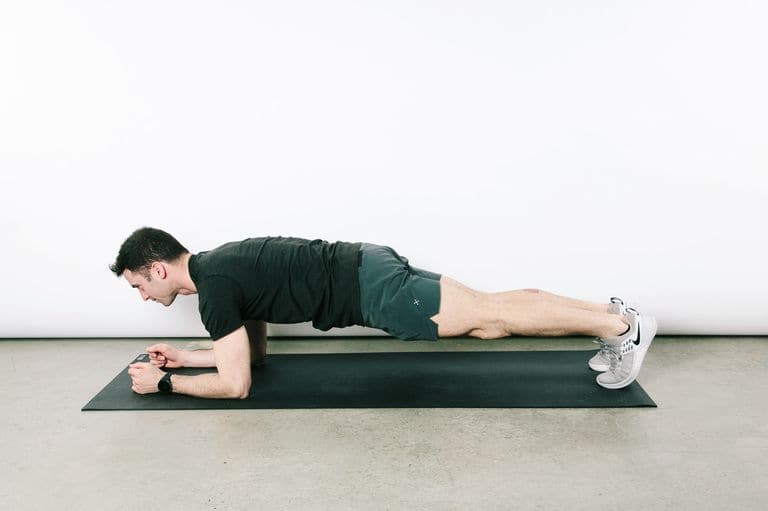 Start on all fours. Lower onto your forearms with shoulders directly over elbows. Step feet back into a forearm plank position. Draw your shoulders down and back and engage abdominal muscles to keep hips in line with shoulders so your body forms a long, straight line. Squeeze legs and glutes for support. Hold this position for 60 seconds.

4. Side Plank to Thread the Needle

Lie on your right side with legs, hips, and shoulders in line. Prop yourself up on right forearm so elbow is below shoulder. Lift hips off the floor and extend left arm straight up to ceiling. Draw left hand down as you roll shoulders forward and reach below right underarm with hips remaining lifted. Reverse to return to starting position and repeat for 60 seconds. Repeat on the opposite side.

Start on your hands and knees. Keeping your back flat, use your core to lift your knees off the ground a few inches. Step left hand and right foot forward. Then step right hand and left foot forward. Continue to alternate as you crawl forward, making sure to look straight ahead the entire time. Do 30 seconds moving forward and back, then 30 seconds moving from side to side.

Perform each exercise for 60 seconds attempting as many reps as possible.

Start lying facedown on a mat with arms extended straight out. Engage your back to lift arms and legs up off the mat as high as possible. Keep your gaze down to maintain a relaxed neck. Hold for one count, then lower back down. Repeat.

Start standing. In one quick motion, drop hands to ground as you jump feet out behind you and lower chest to mat with hands directly under shoulders. Press through hands to push back up as you jump feet toward hands. Lift hands off floor and explosively jump straight up into the air. Land softly, coming down into a deep squat. That’s 1 rep. Repeat.

Stand with feet hip-width apart and extend arms out at shoulder height with a micro bend in elbows, palms facing up. Keeping shoulder blades back and down, raise arms 5 centimetres, then lower back to starting position. Repeat. Trust us, you’ll feel the burn.

Stand with feet hip width and send hips back to bend over about 45 degrees. Extend arms straight down in front of chest with palms in a fist. Using your upper back, open arms out wide until they are extended at shoulder height. Return to starting position and repeat.