Tandem around the world? Why ever not…

Around the world, on a tandem. That sounds better than a Monday-morning desk session, right?

Around the world, on a tandem – that sounds more appealing than your regular Monday-morning session at your office desk, right?
Aboard a bright pink tandem called Alice, Catherine “Cat” Dixon and Rachael “Raz” Marsden are currently pedaling their way down the California coast. They’re more than 20 000km into their 28 000km attempt to set the women’s Guinness World Record for circumnavigating the globe on a tandem bike, and they’re right on track to succeed.

Dixon and Marsden are also raising money for two charities, Oxfam, an international poverty relief organization, and the Motor Neurone Disease Association. They recently surpassed their goal of raising 18,000 British pounds—one for every mile of their journey—but they’re hoping to raise far more. They’re asking for every donor to make their donation in someone’s honor or memory, along with specifying that person’s favorite music; Dixon and Marsden will listen to those songs that day as they ride.

READ MORE You Can Tour Too; Travel Oman

In order to set a record, Guinness said the duo would have to finish within 320 days. They set off on June 29, and they’re aiming to finish by no later than April 4, at 280 days. They’ll likely cross the quite literal (and pink) finish line painted across the pavement in Oxford, U.K., at the end of March. If all goes according to plan, their record will be faster than the men’s record, which currently sits at 281 days, 22 hours, and 20 minutes.

“We’re hoping to do it the fastest it’s ever been done,” Dixon said.

More than halfway around the world, their tandem route has taken them through over a dozen countries. Here’s what they’ve discovered so far.

You’re More Capable Than You Think

Marsden, 55, hasn’t been a road cyclist for very long, though she does have a long history of commuting to work by bike. She and Dixon, who’s 53, began riding together (but not on a tandem, yet) after meeting at the London to Paris Cycle Challenge for the Motor Neurone Disease Association.

“Then I met Cat, and she’s one of those people that every time you think you’ve done something she says, ‘Well you could do a bit more,’ or ‘Well how about this race?’” Marsden said. She had only been cycling for a month when Dixon invited her on a seriously challenging ride.

Since then, they’ve done various rides throughout the U.K., big mountain climbs in Europe, and L’Etape du Tour.

“She’s always pushed me beyond where I think I’m comfortable,” Marsden said.

They started playing around with the idea of riding around the world, which is something Dixon has always wanted to do. That evolved into doing it on a tandem bike—which Dixon was somewhat familiar with, and Marsden not at all—which then turned into trying to break the women’s world record while they were at it.

“So we got a tandem, we trained on it, and here we are,” Dixon said.

On its own, biking around the world is an incredible feat that would test anyone’s limits. Aiming to set a new world record on top of that is simply next-level. Dixon and Marsden have been riding 80 to 100 miles a day through unfamiliar terrain, self-supported, in all kinds of conditions through countless repairs and flat tires.

That’s capability at its finest.

Passing through Australia was difficult in two ways: It was an incredibly demanding ride, of course, but it was also terrible seeing the fires and drought that are ravaging the country.

The Australian coast, they said—from Sydney up to Brisbane—is essentially on fire.

“We were going to go near Sydney and then up the coast,” Marsden said. “But we were advised we might need to cycle in respirators, so we did a detour. But it was so hot and dusty, more like a desert really.”

They avoided most of the fires by moving inland, yet doing so brought them into an area of severe drought.

“The reason it isn’t burning there is that it hasn’t rained there since 2016,” Dixon said. “And to be honest, there’s not much to burn.” 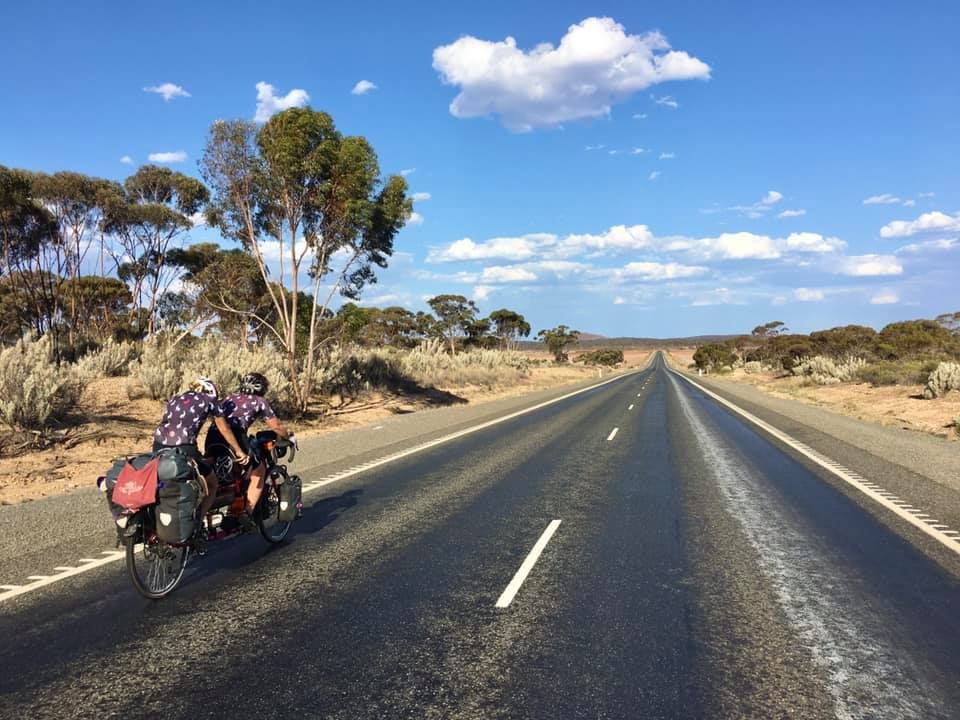 After their journey through the drought-stricken area, they then had to cross the even more desolate Nullarbor Plain. Despite how challenging it was, riding through the Nullarbor Plain was one of the highlights of their trip, if only because of how incredibly remote it was.

“It was really hard, and the distances between places is huge,” Dixon said. “We were cycling over 100 miles just between different places to get water and things, into a headwind.”

Though they managed to bypass the fires, they couldn’t completely avoid the smoke. One day they awoke to find that the wind had changed direction, bringing with it a light haze of smoke from a fire 50 miles away.

“We were very conscious of the smoke, even though we weren’t near it,” Marsden said. “So for people living in that, it must be just quite awful.”

The impact of the Australian fires could even be felt in New Zealand, as Dixon and Marsden discovered on the next leg of their trip. While passing through Napier, on the East coast of the North Island of the country, they learned that on some days the smoke traveled there, too.

New Zealand Has the Angriest Drivers, But Croatia Is Close Behind

Pun intended. Driving seems to bring out the worst in some people, whether it’s on the road or, you know, the comments section of an online news story about cyclists. As they worked their way into New Zealand, Dixon and Marsden, unfortunately, experienced this firsthand.

“The drivers just didn’t want you on the road, because they had to pass you,” Dixon said. “So even when you’re in the shoulder, which is terrible because it’s often full of gravel or uneven road…some of them were still shouting abuse.”

They avoided the busiest roads when they could, though sometimes it was their only option for crossing the country. But even riding on rural roads, and roads with bike lanes was frightening at times.

“It was a bit of a sport to come up behind you and shout something that scares you,” Marsden said. “I don’t always hear exactly what they’re saying. I’m happily assuming they’re saying, ‘Well done!’”

“I was really concerned about cycling in India, and India is insane in terms of cycling in the sense that you have people coming [on] the wrong side of the road, nobody obeys any traffic laws, everybody pulls out without looking,” Dixon said. “But it’s kind of like a flow, and everybody’s doing the same. And people are not, sort of, impatient.”

The only other place where they felt concerned was riding down the Croatian coast.

“That was a bit hairy as well at times. I got hit on the arm by somebody coming so close,” Dixon said. “They didn’t give you any room.”

“They were just angry,” Marsden said. But, overall, they said most drivers were courteous and that aggressive drivers made up a fairly small minority.

Most People Are Incredibly Kind

While the natural environment of Australia was pretty inhospitable, the people were anything but.

“The Australians were really, really lovely in terms of hospitality and helping us out,” Dixon said, especially on their difficult ride through the Nullarbor Plain, where the temperature hit 109 degrees on some days. Drivers stopped regularly to check on them, and there was one couple in particular that they saw numerous times, pulling a camper, who stopped to make them coffee or give them food.

“They made a carrot cake for us. I mean, we saw them so often,” Marsden said.

“People said Australia would be awful, and it wasn’t at all,” Marsden said, referring to aggressive drivers. “In fact, the drivers stopped on the Nullarbor with things; they stopped with water, oranges, food, tools when we broke down. They were just lovely.” 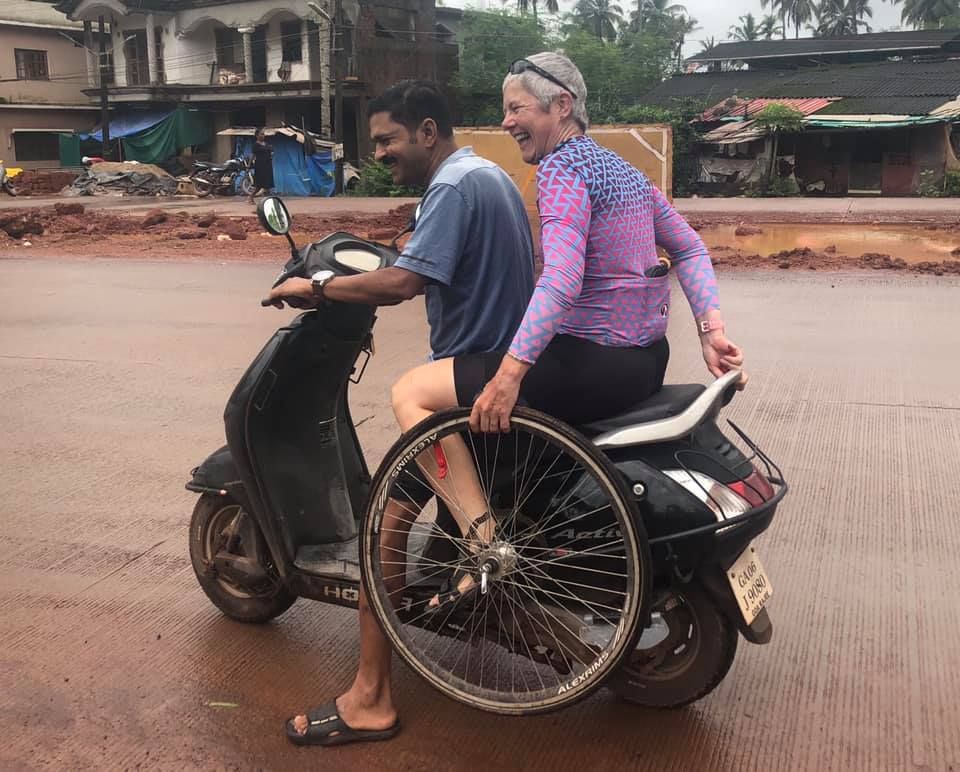 There have been many picturesque “wow moments” on the trip—like riding the causeway into Venice, Italy, at dusk, and A morning in Kerala, India, riding down a “spit of land” sandwiched between the ocean and a river.

“There have seen so many things, in so many countries,” Marsden said. “We could talk about a highlight in every country, really.”

And now they find themselves in California. With the cooler nights and mornings, they haven’t been able to camp as they’d like. But out of all of the places they’ve been, Dixon and Marsden agree: The California coastline is one of the most amazing things they’ve seen.

“It’s gorgeous. We’re just kind of constantly in awe of everything,” said Marsden, who’s also been admiring the wildlife there.

Other great things about California? The roads are pretty nice, they can get good coffee, and they’re crossing paths with more cyclists again.

“Big Sur was just one of the highlights, that’s for sure,” Dixon said. “This coastline, I think, might be the best coastline in the world.”

Their final stop in the United States is Miami, Florida, where they’ll then fly to Morocco and ride through Spain, France, and the U.K. before finishing in Oxford. You can track their terrific tandem ride in real-time here.

READ MORE ON: around the world tandem touring travel