As the 2021 Tour de France looms large - it starts in a few weeks! - Let's see what we can learn from the Giro d'Italia.

Colombia’s Egan Bernal (INEOS Grenadiers) won the 2021 Giro d’Italia in Milan, Italy, on Sunday, becoming only the second Colombian to win the Italian grand tour. The 23-year-old wore the maglia rosa as the leader of the Giro’s General Classification since winning Stage 9 and held on during a tense final week to win the second grand tour of his career (he also won the 2019 Tour de France). Italy’s Damiano Caruso (Bahrain-Victorious) finished second and Great Britain’s Simon Yates (Team BikeExchange) finished third.

Here are five takeaways from this year’s race.

It’s fun to be wrong

Early last week, we called the 2021 Giro d’Italia “Bernal’s race to lose.” At the time, it looked as if the 24-year-old Colombian had the race in the bag. He hadn’t missed a step the entire race, winning two stages and building a seemingly insurmountable lead heading into the final week.

But then came Stage 17, the first stage after the second rest day and a summit finish atop the Sega di Ala. Bernal looked good enough heading into the final climb, but about 3km from the top things started to unravel, and Yates and Portugal’s Joao Almeida (Deceuninck-Quick Step) rode away from the Colombian.

Thanks to the help of his teammate, Daniel Martinez, Bernal recovered to limit his losses, but his bad day gave hope to the men behind him on the Giro d’Italia’s General Classification. While frustrating for Bernal, this was great news for fans, who were treated to an exciting, aggressive race right until the final stage.

This is truly a golden age for the sport, one filled with great champions who somehow keep finding ways to make races more and more exciting. Gone are the days when grand tours were won by more than five minutes, replaced by a generation for whom every second counts. One bad day can be enough to unravel a rider’s bid for glory. 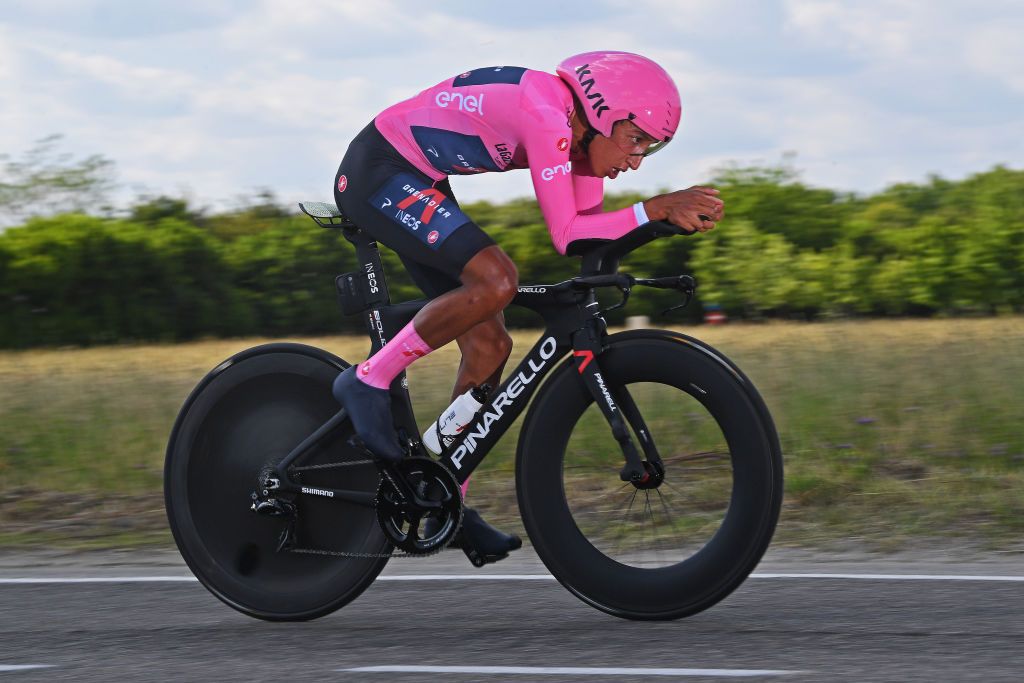 Despite Bernal showing himself to be human during the Giro’s final week, the performance of his INEOS Grenadiers team was downright otherworldly. Overall, the team won the General and Teams Classifications, four stages, and placed a second rider in the top five overall: Colombia’s Daniel Martinez.

Martinez is a terrific example of what makes INEOS so dominant: money. Signed this past off-season from EF Pro Cycling, the Colombian would easily be the top GC rider on most WorldTour teams, but he’s more than happy to sacrifice his own chances for the sake of men like Bernal, thanks to the salary that INEOS is probably paying him. It’s a strategy that makes teams with smaller budgets (which is more or less all of them) grumble, but the results seem to justify the means (at least in the eyes of the team and its sponsors).

Expect more of the same at the upcoming Tour de France where 2018 Tour winner Geraint Thomas will be supported by new signing Richie Porte, who finished third in last year’s race, and that last two winners of the Giro d’Italia, Tao Geoghegan Hart and Richard Carapaz (who was signed from Movistar after winning the 2019 Giro). Given the roster INEOS has been assembling, it’s quite possible that the team could win all three of this year’s grand tours, an impressive—and expensive—achievement.

Deceuninck-Quick Step came into this year’s Giro d’Italia hoping that their 21-year-old Belgian super-talent, Remco Evenepoel, would challenge for the overall victory (despite the fact that he had never raced a grand tour and hadn’t raced in over nine months following a terrible crash last August). In hindsight, the thought of a grand tour rookie with no racing in his legs racing to a top-three finish sounds pretty absurd, but at the time, few were willing to count him out.

Well, despite entering the second week only 14 seconds behind Bernal, Evenepoel crumbled on the gravel roads at the end of Stage 11 and lost more time on the Monte Zoncolan at the end of Stage 14. He continued to drop down the General Classification before a bad crash on Stage 17 finally sent him home for good.

Yes, hindsight is 20-20, but Quick Step has to be wishing it handled things differently–especially given the fact that Portugal’s Joao Almeida, who wore the pink jersey for 15 days and finished 4th overall last year, was forced to ride on behalf of the Belgian early in the race, only to steadily climb his way to 6th overall by the time the race ended in Milan.

Once Evenepoel is physically healed, the team needs to re-think its approach to developing the young superstar, perhaps by giving him more chances to prove himself in shorter–and more challenging–stage races before taking another shot at a grand tour in 2022. If they get it wrong, they risk damaging his ego permanently and with it, his chances of ever winning a grand tour. 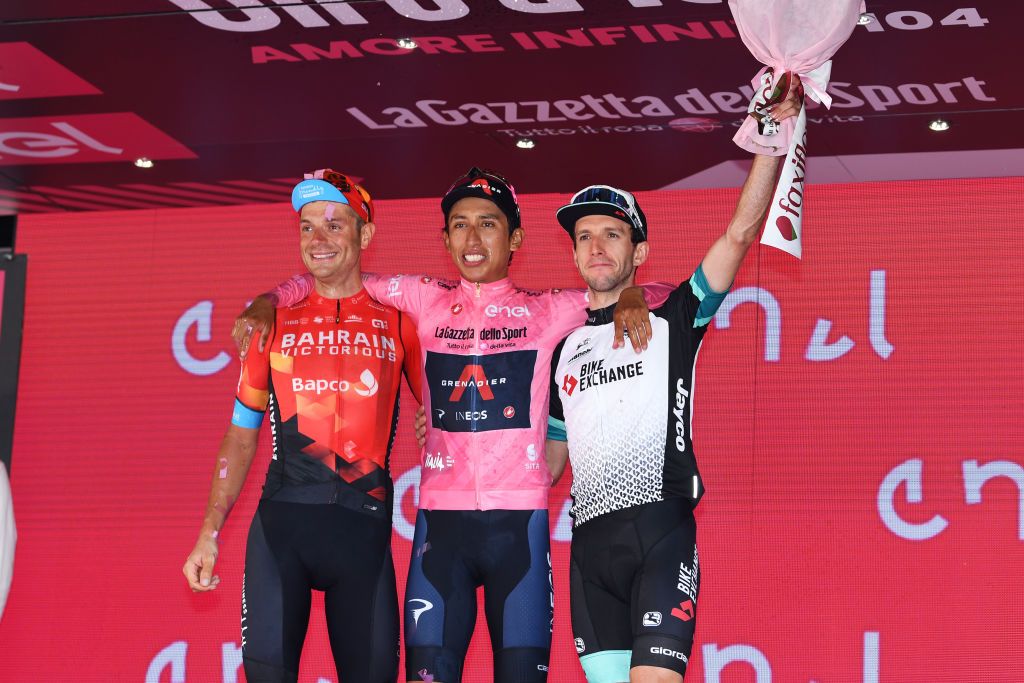 When Spain’s Mikel Landa crashed out of the race near the end of Stage 5, it looked as if Bahrain-Victorious’s hopes for a good showing went home with him. However, the team rebounded quickly, with Switzerland’s Gino Mäder winning the next day’s stage in Ascoli Piceno.

But the team’s real success came thanks to the 33-year-old Italian Damiano Caruso, who—after riding consistently throughout the Giro’s first week—rode his way into the top three overall on Stage 11. As the riders around rose and fell, the Italian never wavered, moving up to second overall on Stage 16, and then winning Stage 20 to cement his runner-up status.

Second-place overall and a mountain stage win would have been a terrific result for Landa, making Caruso’s performance a true life-saver for his team. So has the team found a true GC contender? Well, while the Italian has scored top-10 finishes in grand tours three other times in his career, this year’s Giro still looks to be more of an anomaly than the norm. But he’ll forever be able to call himself a runner-up in his home grand tour, and his performance reminds teams that it’s important to enter a three week stage race with a rider capable of leading the team should their captain go down early.

Peter Sagan’s contract with BORA-Hansgrohe expires at the end of the season, and rumors are swirling as to where he’s going to land (BORA’s general manager has indicated that it’s time for Sagan to move on given the immense amount of money he expects to be paid). We had hoped to hear an answer on one of the Giro’s two Rest Days, but we’re still waiting.

A popular landing spot had been rumoured to be Deceuninck-Quick Step, who like BORA, is sponsored by Specialized. Sagan’s been one of the Specialized’s most popular poster children for years now, and the American bike company could easily throw in enough cash to make the move possible. The signing looked all the more imminent after it was announced early in the Giro that Sam Bennett, Quick Step’s current sprinter, would not be re-signing with the team following the expiration of his own contract at the end of the season. (In an odd twist, Bennett used to ride for BORA, but left because Sagan was team’s top sprinter; now he’s rumoured to be heading back to BORA to replace Sagan.)

But a funny thing happened on the way to the altar: Patrick Lefevere, the team’s general manager, announced that Sagan would not be joining the team, citing the cost of bringing on Sagan and his 11-person entourage. (Yes, signing Sagan means making room for several of his teammates as well as multiple staff persons.) And can you blame him? Yes, Sagan won a stage and the Giro’s Points Classification, but his best years are clearly behind him. He will certainly find a new home, but we wonder if he’s smart to demand so much at this stage in his career. Lefevere’s smart to say no, or at least wait until Sagan’s asking price starts to drop.