The 2021 Giro d'Italia is ten stages old - almost halfway - and the best stages are still to come. Week one was a cracker, though.

The 2021 Giro d’Italia ramps it up a whole heap of gears on stage 11 – the white roads of Tuscany welcome the riders after a rest day, in a stage that is  promises all the drama of the Strade Bianche (keep an eye on Egan Bernal, who finished third there earlier this year). Monday’s 10th stage ended with 2019 Tour de France champion Egan Bernal in the lead; but only 61 seconds separate the top ten riders, so the race is far from over.

May is always a busy month, so we can’t blame you if you haven’t been watching every stage of the 2021 Giro d’Italia since it started 10 days ago in Turin. (Though we do recommend you tune into these stages!) So to help you get up to speed before the race begins its second “week”—we use the term loosely since this year’s rest days fall on Tuesdays—we run down a few crucial questions.

Bernal (INEOS Grenadiers) went into the Giro’s first rest day wearing the Maglia Rosa as the leader of the General Classification. The 23-year-old Colombian won Stage 9 atop the Rocca di Cambio, taking the jersey after a consistent first week in which he steadily gained time on his rivals. He heads into the Giro’s second week with a 14-second advantage over Belgium’s Remco Evenepoel (Deceuninck-Quick Step) and 22 seconds over Russia’s Aleksandr Vlasov (Astana). 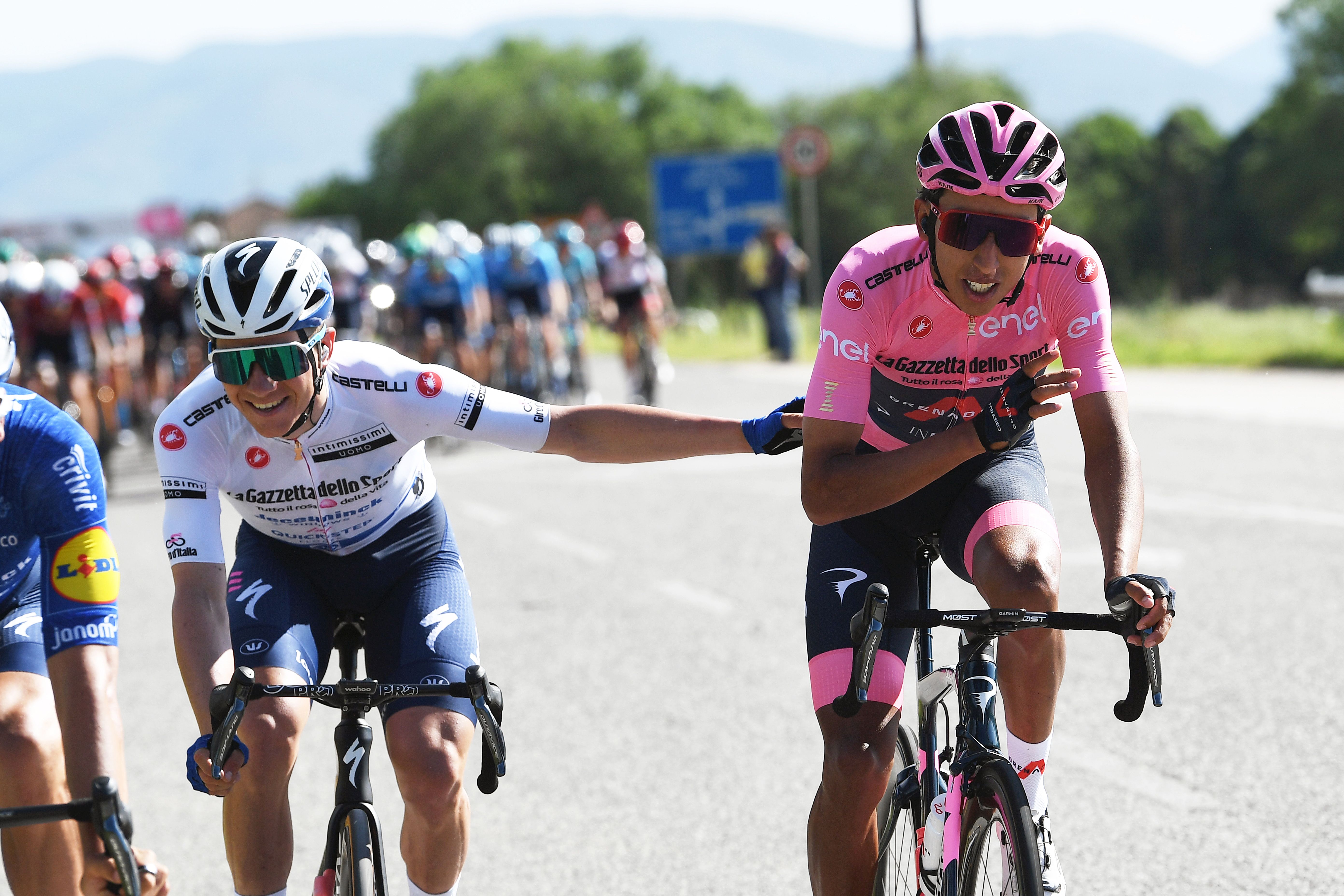 The 104th Giro d’Italia opened with a 8.6km individual time trial through the streets of Turin. Italy’s Filippo Ganna (INEOS Grenadiers) won the stage to take the race’s first Maglia Rosa, and the prerace contenders all finished within about 30 seconds of one another, setting the stage for an exciting first week of racing.

Stage 2 was the first road stage of the race, which ended with a field sprint in Novara. Belgium’s Tim Merlier (Alpecin-Fenix) took the win, the first stage victory in a grand tour for his team. A breakaway went the distance on Stage 3, with Dutch rider Taco van der Hoorn (Intermarché-Wanty-Gobert Matériaux) holding on to take a solo victory, the first grand tour stage win for his team as well.

Stage 4 brought the Giro’s first uphill finish. American Joe Dombrowski (UAE Emirates), who’s been close to winning a stage at the Giro for years now, finally broke through, winning the cold, rainy stage in Sestola and taking the Maglia Azzurra as the leader of the Giro’s King of the Mountains competition. Italy’s Alessandro De Marchi (Israel Start-Up Nation), finished second on the stage and took the Maglia Rosa.

Stage 11 travels through Tuscany to Montalcino, with 35km of white gravel roads in the final 70km. The gravel roads and the short, steep hills they climb should shatter the peloton, perhaps creating more gaps on the General Classification.

Behind them, the Giro’s GC favorites tested one another, with Bernal leading in a small group of favorites that finished 11 seconds ahead of the next, which included pre-race favorites such as Evenepoel and Great Britain’s Simon Yates (Team BikeExchange). Italy’s Vincenzo Nibali (Trek-Segafredo) was the day’s biggest loser, conceding 34 seconds to Bernal’s group and 23 seconds to Evenepoel’s. Nibali’s since lost even more time, all but eliminating his chances a third Giro victory.

Stage 5 ended with a field sprint in Cattolica. Australia’s Caleb Ewan (Lotto-Soudal) took the win, but the big story was a series of crashes in the finale that took out Dombrowski, Russia’s Pavel Sivakov (INEOS Grenadiers), and Spain’s Mikel Landa (Bahrain Victorious), who had looked to be one of the Giro’s top overall contenders on the previous day’s uphill finish. Landa’s injuries were so severe that the Spaniard couldn’t even finish the stage; Dombrowski and Sivakov both made it across the finish line, but were unable to start the next day.

Stage 7 ended with a field sprint in Termoli, where Ewan took his second win of this year’s Giro, and Stage 8 was won by a breakaway, with France’s Victor Lafay (Cofidis) winning the stage in Guardia Sanframondi, his team’s first stage victory at the Giro since 2010.

Stage 9 brought the Giro’s first true summit finish atop the Rocca di Cambio, a Category 1 climb whose final 1.6km were steep and unpaved. Bernal proved to be the strongest, winning the stage and the Maglia Rosa with a searing attack about 500 meters from the finish line. Italy’s Giulio Ciccone (Trek-Segafredo) finished second and Vlasov finished third. Evenepoel overcame poor positioning at the start of the gravel section to end the day fourth. Despite winning the 2019 Tour de France, the win was actually Bernal’s first grand tour stage victory—yes, he won the 2019 Tour without winning a single stage.

The first “week” ended in Foligno with a win for Slovakia’s Peter Sagan (BORA-hansgrohe) after his teammates pushed the pace on some hills in the final hour, dropping many of his rivals. The GC battle continued however, with Bernal and Evenepoel sprinting for bonus second 18 seconds before the line. Evenepoel finished second while Bernal finished third, allowing the Belgian to take back one second on the Colombian. 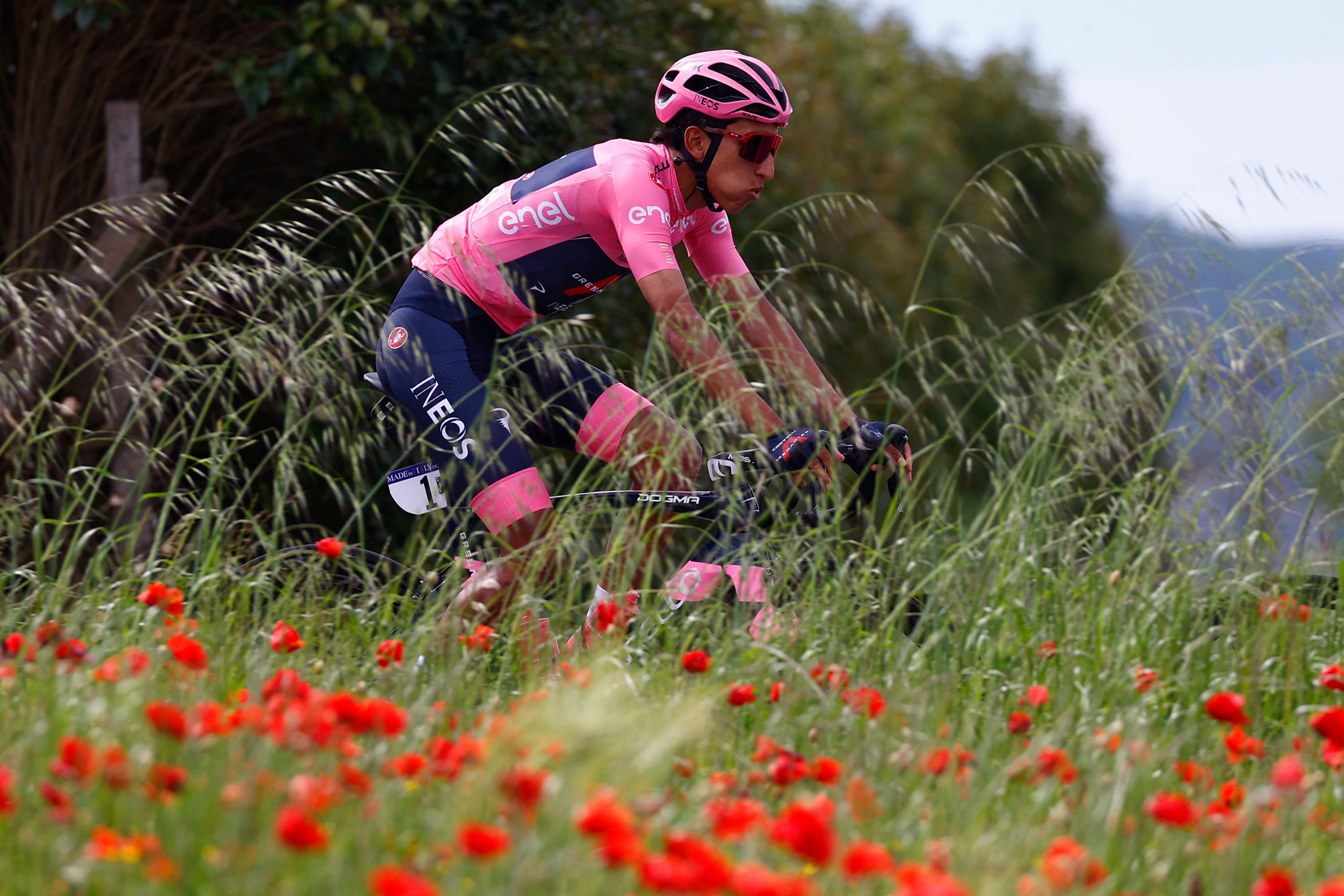 What does it all mean, and what did we learn?

While the time gaps have been small on the Giro d’Italia’s three uphill finishes, Bernal has done enough to make himself the man to beat. He wears the pink jersey by only 14 seconds over Evenepoel and 22 seconds over Vlasov, but given his pedigree—and the high mountains still to come—his lead should increase in the second week.

Or should it? Let’s not forget that Bernal’s been battling back pain so severe it forced him to abandon last year’s Tour de France. But he did a great job avoiding crashes during the Giro’s first week and seemed to have measured his efforts carefully on the uphill finishes of Stages 4 and 6, a smart move given all the climbing still to come. If his big-ring acceleration on the Rocca di Cambio at the end of Stage 9 indicates that he’s put his injury behind him, the rest might never catch him.

As an added bonus, Bernal has the benefit of the Giro’s strongest team supporting him, with riders like Daniel Martinez and Gianni Moscon capable of supporting the 24-year-old late into the Giro’s toughest stages (as Moscon illustrated so well at the end of the Stage 9).

Behind the Colombian, Evenepoel—who hasn’t raced in nine months and has never competed in a grand tour—is the biggest wild card. Will he get stronger as the race progresses or fade as the race progresses? Vlasov is another question mark; the Russian has shown the potential to be a grand tour challenger, but has only finished one so far in his career. And what about Ciccone? The Italian sits fourth overall but came to the Giro to support Vincenzo Nibali. Assuming Nibali throws his weight behind his younger compatriot, can Ciccnone mount a serious challenge?

In all, there are still more questions than answers, which is typical at this stage in a three week tour. But with the top ten riders currently separated by a mere 61 seconds, one thing is certain: we’re due for more excitement.

What’s next in the Giro d’Italia?

The Giro d’ Italia’s second “week” begins with a stage that we expect to be one of the most exciting in this year’s race. Starting in Perugia, Stage 11 travels through Tuscany to Montalcino, with 35km of white gravel roads in the final 70km. The gravel roads and the short, steep hills they climb should shatter the peloton, perhaps creating more gaps on the General Classification. Bernal rode the Strade Bianche one-day race in March, which is held on similar terrain. The Colombian finished third, a nice confidence boost for the race leader going into this challenging stage. Heading through the region famous for its Brunello di Montalcino vineyards, Stage 11 is also the Giro’s “wine stage.”

Stage 12 should be another tough day, with lots of climbing in honor of Italian legends Gino Bartali and Alfredo Martini. The stage should go to a rider from the breakaway, but it’s also a perfect chance for overall contenders to try and stage an ambush in a bid to gain some time. Stage 13 is the flattest of the second week, a 198km ride from Ravenna to Verona that should end in a field sprint

Saturday’s Stage 14 is one of the most anticipated of the race, as it ends with a summit finish atop Monte Zoncolan (14km at 8.5%), one of the hardest climbs the Giro’s ever tackled. If Bernal is still in the lead, this is a day he should love, as the Zoncolan’s slopes only get steeper as the climb progresses, topping out at a whopping 27 percent inside the final kilometer. Three of the six riders to have won atop this climb have gone on to win the race overall.

Wedged between two hard mountain stages, Stage 15 looks perfect for a breakaway to succeed. Starting in Grado, the stage brings the Giro into Slovenia, with three laps of a circuit featuring a Category 4 climb before the finish in Gorizia.

The second “week” ends with Stage 16, a 212km monster through the Dolomites. Featuring four Category 1 summits (three of which top out over 2,000 meters) it just might be the hardest stage of the entire Giro d’Italia. The day begins with the Category 1 La Crosetta, which comes too early to ignite the GC battle but should send a strong breakaway up the road. From there a long drag through the valley brings the race to the foot of the three successive climbs that make this stage so challenging: the Passo Fedaia (14km at 7.6 percent), the Passo Pordoi (11.8km at 6.8 percent), and the Passo Giau (9.9km at 9.3 percent). The Pordoi is this year’s Cima Coppi, the highest summit in the race.

The stage ends with a downhill finish in Cortina, but there’s enough climbing jammed into the final 100km that it won’t matter. It’s a Monday, but try and find the time to watch the action, either live or on demand. By the end of the day, we’ll have a fairly good idea as to the rider—or riders—poised to win this year’s Giro.