The first stage after the rest day plays havoc with riders' legs, as will the predicted crosswinds. Could this be a repeat of Stage 7?

After a rest day, the Tour’s second week opens on the windy Atlantic coast, with a stage that starts and ends on two large islands in the Charente-Maritime department of southwestern France. 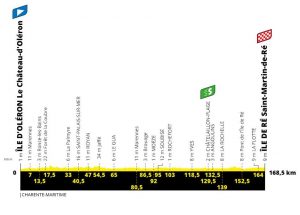 The stage begins at Le Château-d’Oléron and quickly takes a viaduct across the Atlantic onto the mainland. From there the riders wind their way south along the coast (read:windy) to Royan, at which point the race heads inland and then north toward Rochefort. The race then hugs the coast again as the stage continues its way north to the Intermediate Sprint in Châtelaillon-Plage, through La Rochelle, and finally west onto the Île de Ré for the finish.

This is the flattest stage of the 2020 Tour de France, but it still could be dramatic. Crosswinds and echelons are a strong possibility, and the day after a rest day is always a tense, nervous affair as riders re-acclimate themselves to the speed of the peloton.

READ MORE What We Learned From Stages 1-9!

In this case they’re shifting from the little chainring to the big one, leaving the mountains for windswept coastal roads, which is always a tough transition—especially for the Tour’s overall contenders. We saw the big teams make the most of moderately-windy conditions on Stage 7, to the detriment of Richie Porte, Tadej Pogacar and others, we can only hope for a repeat as racing fans.

So Who Will Win?

This should be a stage for the sprinters, but with crosswinds a strong possibility, it could end in a fashion similar to Stage 7 in Lavaur, where Jumbo-Visma’s Wout van Aert won his second stage of this year’s Tour from a reduced peloton. If crosswinds indeed split the race in the final hour, van Aert will be top contender along with Quick-Step’s Sam Bennett and BORA-Hansgrohe’s Peter Sagan, both still winless in this year’s Tour. And keep an eye on B&B Hotels-Vital Concept Bryan Coquard. The Frenchman finished third on Stage 7 and seems to be getting better as the race progresses. But Bennett it has to be. We will keep with this until he gets it! 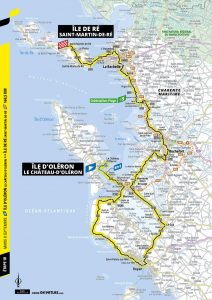