It's hard to buy a bike that doesn't have some element of carbon fibre in its make up: Here's all you need to know about cycling's Kryptonite.

1) Not all carbon fibre frames are made in Asia…

2) … But raw carbon itself DOES mostly come from Asia.

Carbon fibre itself is typically made of a material called polyacrylonitrile (PAN) fibre. A less common precursor is called pitch. The PAN fibre is cooked to extremely high temperatures, which burns off all the non-carbon material and leaves a series of very thin, long fibers. The more processing, the more the stiffness increases.

It’s a sophisticated industrial process, and only a few companies worldwide have the capability to make raw carbon fibre. As of 2010, per a U.S. Department of Energy report, more than 90 percent of the world’s carbon-fibre supply comes from just six companies: Toray, Teijin (Toho Tenax), Mitsubishi Chemical Corporation, Zoltek, Hexcel, and Cytec. Toray, Teijin, and Mitsubishi account for almost two-thirds of global carbon fibre production. Zoltek, Hexcel, and Cytec are headquartered in the U.S. and make a little less than a third of the world’s carbon fibre. 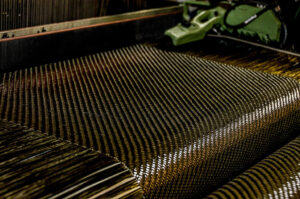 3) There’s more than one kind of carbon fibre.

Carbon fibre comes in various forms: raw thread or sheet fibre (both continuous fibre), and short-tow fibre that can come as either sheets, or clumps of chopped, very short-length fibre. Chopped fibre is used in products like pedal bodies. Sheet style is most common in bike frames, and is what it sounds like: continuous sheets of carbon fibre (called plies), which look like bolts of fabric and are typically about as wide, coming wrapped on giant spools. Raw thread is far less common in the bike industry; only a handful of bike makers like Giant and Time have the technical capability to work with raw thread. 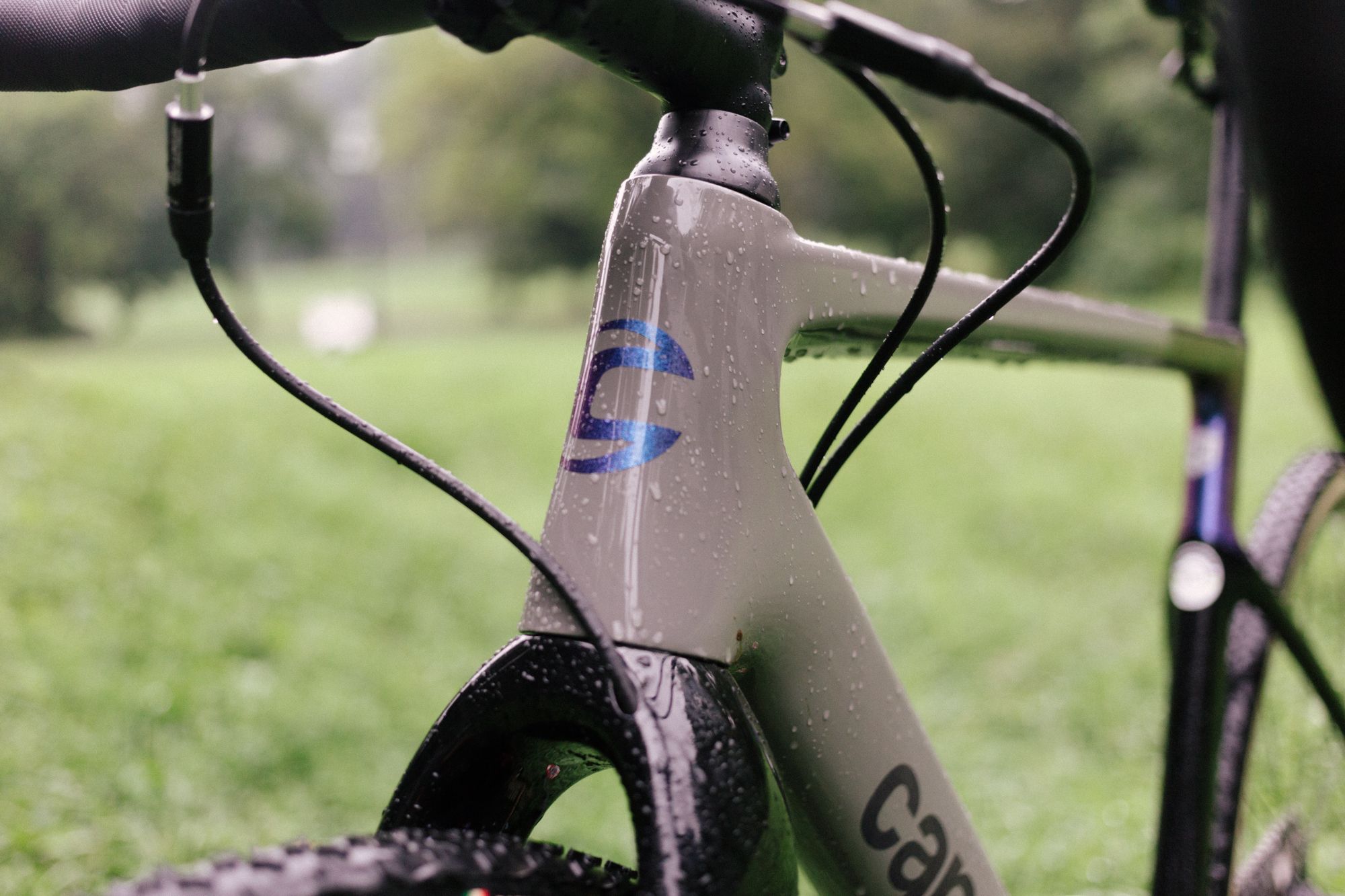 4) Carbon fibre is only half the story.

We say “carbon fibre,” but what we really mean is “carbon-fibre composite”—it’s not the only material in your frame. That’s because carbon fibre incredible stiffness properties come at a price: On its own, it is quite brittle and prone to splitting and cracking. To preserve its abilities, it’s suspended in a glue-like material called epoxy resin before it’s moulded, forming a composite material. Most carbon fibre used in the bike industry comes in this form, which is called “pre-preg.”

The resin accomplishes two tasks. First, it holds the carbon together—both the individual fibres within a ply and, once cured, the orientation of two plies to one another. Second, resin adds crucial toughness and durability. It’s slightly plastic, deforming under impact to help absorb sharp blows like a crash or a rock strike, without creating a crucial split between the fibres. 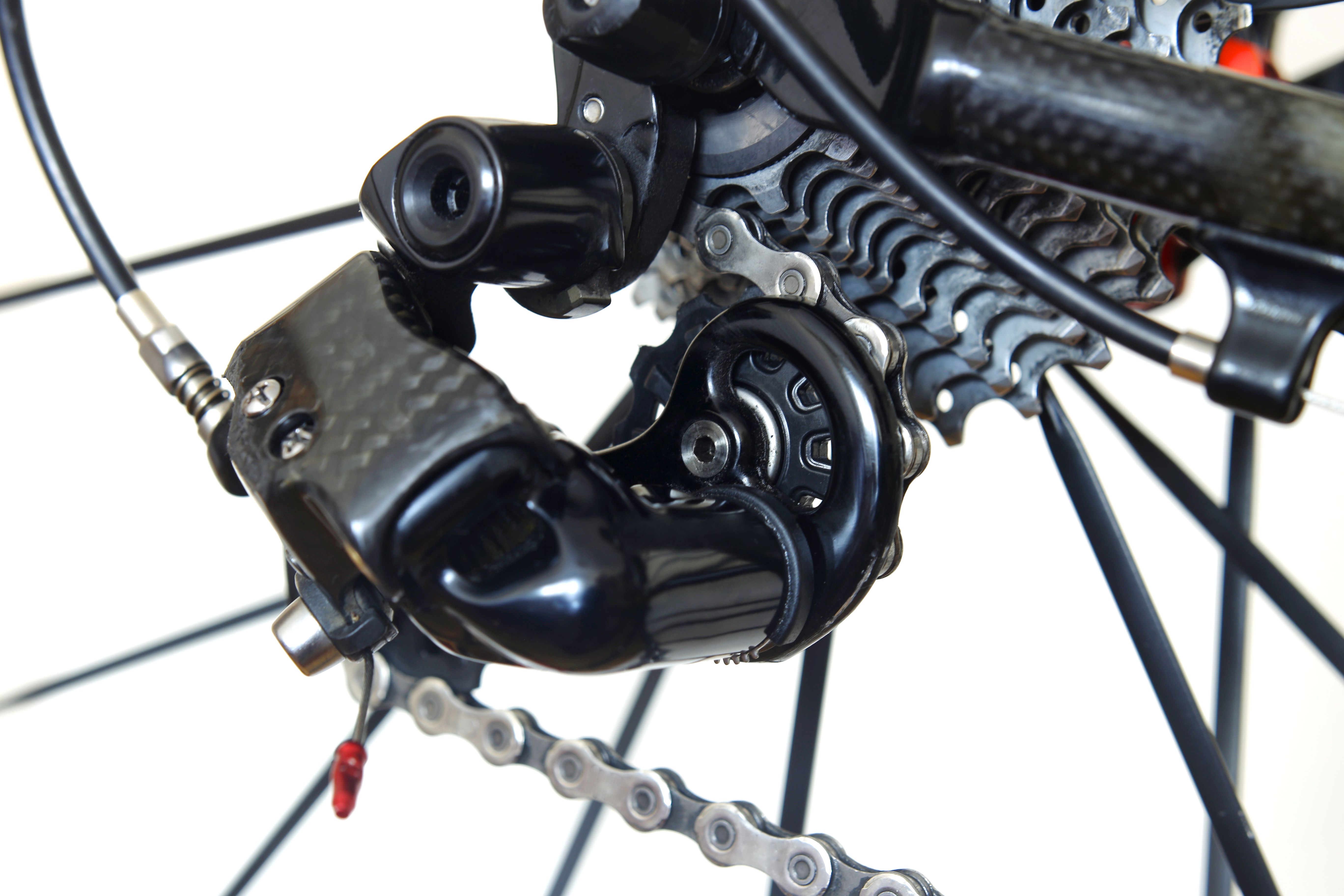 Every bike company liberally salts its literature on frame design with buzzwords like high-modulus or even “ultra high-modulus.” But those terms aren’t the bike industry’s to toss around. Carbon fibre is graded by its stiffness, rated in terms of tensile modulus, or how much a material will deform under load. For carbon fibre, those ratings and the stiffness range each covers are set by the Japan Carbon Fiber Manufacturers Association (JCMA).

Most of the carbon fibre used in the cycling industry is standard modulus or intermediate modulus; on more expensive frames, higher grades do come into play. But that doesn’t sound very sexy, so there’s often a bit of grading on the curve as companies slip high-mod and UHM into their copy. Some companies are moving away from massaging the grading system altogether, simply creating their own carbon grading system with company-specific marketing terms like FACT or Advanced Grade.

6) The carbon itself is a blend.

A good carbon-fibre frame has a blend of carbon fibres of different types, each used in different places in a frame for very specific purposes. High-modulus fibre is expensive (thanks to all that processing), so bike companies judiciously use relatively small amounts in key areas like the downtube, bottom bracket, and chainstays to resist pedalling forces and make the bike stiffer. But they’re placed in the mould along with standard- and intermediate-modulus and high-strength fibre to create the kind of durability, performance, and ride quality a good carbon frame has. 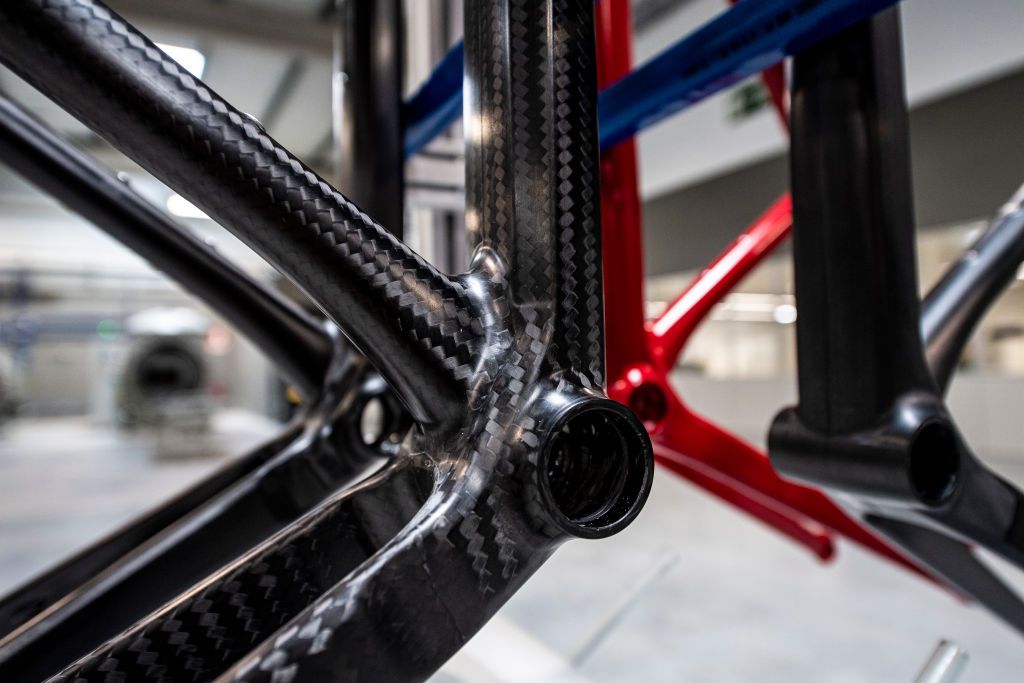 7) The real magic—and cost—is in the layup.

Carbon fibre is a great bike material for two reasons. First, it’s stiffer at lower weight than almost any other material we know of. Second, unlike metal, carbon fibre’s stiffness can be finely manipulated; its stiffness properties apply only unidirectionally, or along the long axis of the fibres themselves, so stiffness can be tuned based on how the carbon-fibre composite is oriented, or placed in the mould. That’s called anisotropism. Metals, by contrast, are isotropic, exhibiting the same strength and stiffness properties along any axis of the material.

Engineers use sophisticated software programs that take into account the grade of carbon, the resin, the shape, size and orientation of the carbon-fibre ply, and even where it’s located in the mould. That’s how frames are optimised for extreme lightness or rigidity, or both, but those programs and the graduate-degree expertise to run them are expensive. That—and the cost of the High Modulus carbon needed to realise the most heavily tweaked designs—is what makes the nicest carbon-fibre bikes so much more expensive than even their mid-line peers. 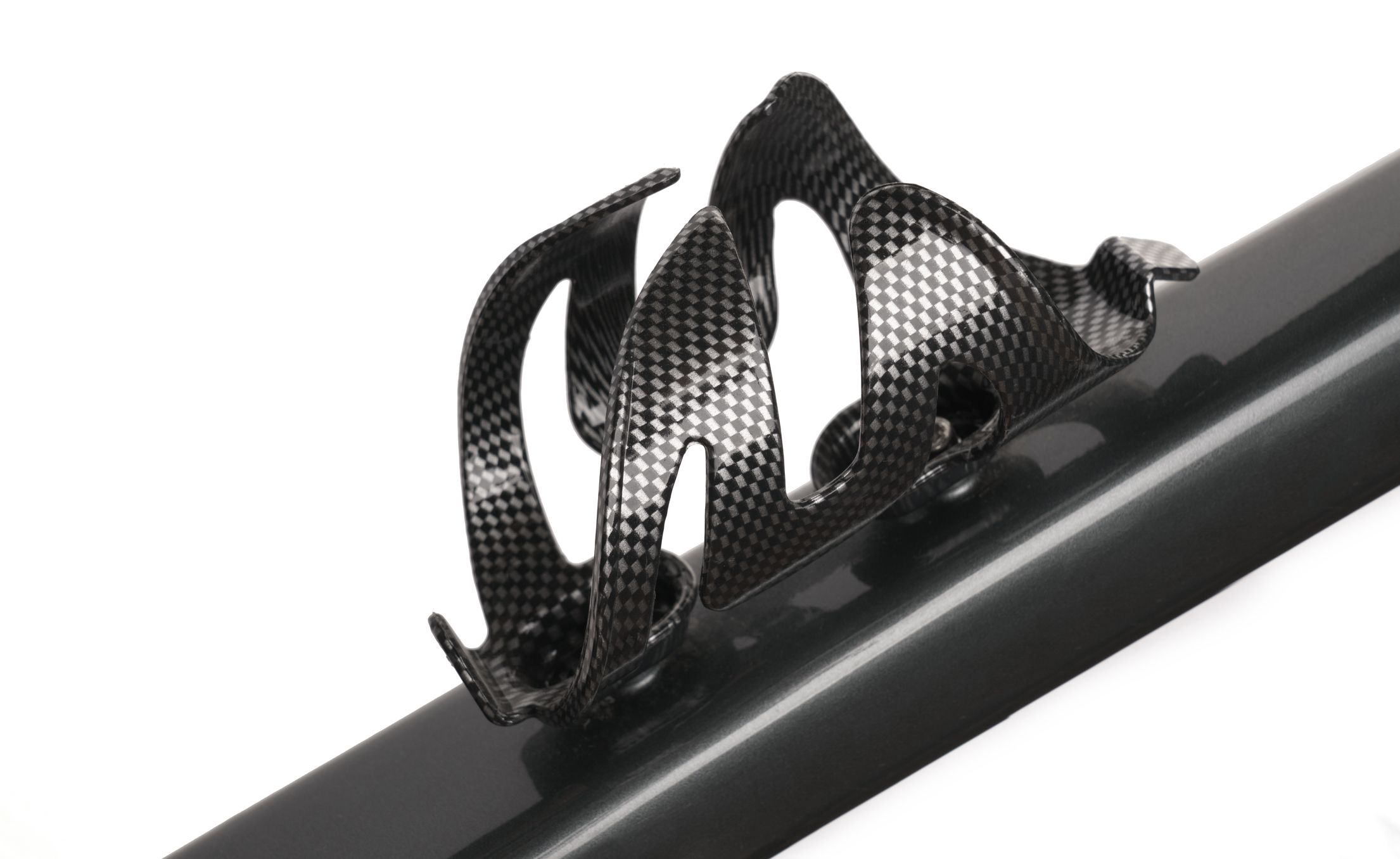 8) That weave is mostly cosmetic.

That classic, cross-woven, carbon-fibre look is actually not much of a performance attribute. A woven layer adds some stiffness, but one of its major purposes is to add a top sheet that’s okay to ding, scratch, and dent, since most of the structural properties of the frame or part come from the unidirectional fibre underneath.

It also provides a cosmetic layer that showcases a builder’s craftsmanship, since lining up the edges of a woven sheet in the mould to create a perfect seam requires significant expertise. Increasingly, though, bike and part makers are skipping a woven top layer altogether and just letting the unidirectional fibre serve as the cosmetic skin. 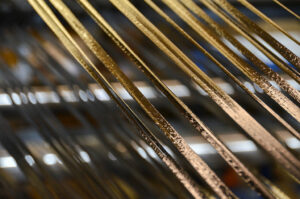 9) All carbon frames are handmade.

Custom framebuilding is often associated with steel and titanium, but every carbon frame, wheel, handlebar, or other part made with carbon-fibre sheet requires intensive hands-on work, whether the frame is a custom model from a small builder like Crumpton, or a production model from Giant or Trek.

The individual plies of carbon are often cut from a sheet by a computer-controlled machine, but that’s about the only automated process throughout production: A carbon-fibre composite frame or part must be assembled in a mould precisely according to the layup schedule, a process that has yet to be automated. In smaller facilities, one person may lay up an entire frame. In larger ones, workers will create a layup for a specific portion of a frame, like a bottom bracket area, then pass the part along to other workers to lay up around tubes, and place in the final mould for curing.

Even the post-cure process—where a frame is broken out of the mould, cleaned up, and painted—requires close attention. Expert workers examine the frame or part for problems like wrinkles in the carbon, or spots where the layers aren’t smoothly compacted, which could cause a failure. 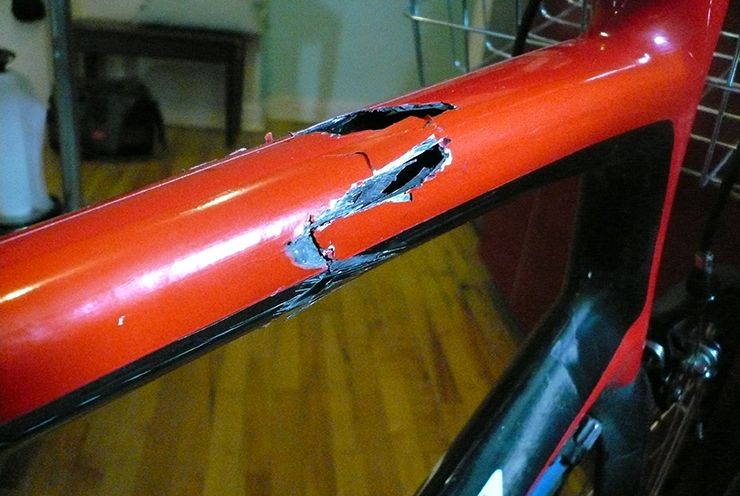 10) Yes, carbon fibre can be repaired.

It’s a common misconception that once a carbon-fibre frame or part is damaged, it’s toast. But like a steel or titanium frame, a carbon-fibre frame can sometimes be repaired. The process isn’t much different: The damaged section is cut out and then bridged with new material that’s cured, sanded, and painted to match. With the most expert carbon repairs, you may not even be able to see the affected portion.

But this is a job for experts. There are DIY carbon-fibre repair kits, but they’re primarily intended for products like kayak paddles. Bicycle frames are complex, load-bearing structures that have to take the stress of forces like sprinting and high-speed cornering. If your carbon-fibre frame is damaged, the manufacturer may have an in-house repair process, or you can go with a reputable third-party like Carbon Bike Repair or Graham Kidson. But in no circumstances should you attempt a repair yourself.

The rise of this material has allowed an explosion of distinctive frame styles. It’s possible to identify a Pinarello or a Specialized just from a frame’s silhouette. But that distinctive industrial design also makes frames particularly susceptible to copying by counterfeiters.It’s relatively simple to create a mould from a real version of a finished frame (or even detailed photos of the product). But the materials, layup, and construction methods may differ completely. Many counterfeiters lack the sophisticated manufacturing capability and will use cheap filler materials to mimic the outward appearance of the real thing in counterfeit bikes. As Specialized’s former test lab director Santiago Morales said of counterfeits: “It’s not an engineered product in any way; it’s like a canvas that’s painted to look the same.”